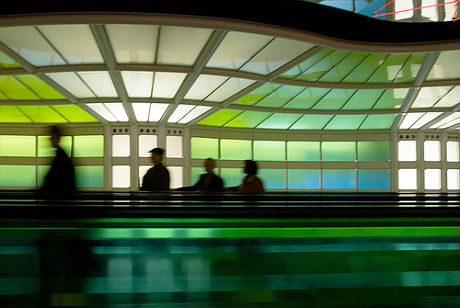 Aviation is a carbon intensive industry, with air travel and transport contributing two percent of global greenhouse gas emissions, according to the Intergovernmental Panel on Climate Change.

But airports around the world are making significant efforts to reduce their carbon footprints, and Chicago O’Hare International Airport is among the leaders.

In addition to other environmental measures, O’Hare is planning a new solar farm, slated for completion in 2016, that could provide five to 10 percent of the airport’s electricity needs, according to Chicago Department of Aviation spokesperson Karen E. Pride.

Since 2007 Chicago has hosted an annual international “Airports Going Green” conference which began as a one-day seminar and “has become more than just a conference – it’s a movement,” in Pride’s words.

Pride said Chicago was the first airport in the country to adopt a sustainability guidance program for design, construction, operation and maintenance, and tenants and concessionaires.

All construction vehicles involved in the ongoing modernization of O’Hare airport are required to burn ultra-low sulfur diesel fuel; a requirement that started in 2005, five years sooner than federal diesel regulations.The airport has also reduced truck traffic by saving soil onsite and reusing it, avoiding the emissions of 72,000 tons of carbon dioxide, according to the aviation department.

Carbon emissions are also avoided by a requirement that all materials for O’Hare construction be sourced within a 500-mile radius, and by reusing and recycling things like signs and bus kiosks.

Air travel and air freight transport involve burn large amounts of fossil fuels; and planes release gases and particles directly into the upper troposphere and lower stratosphere where they alter the concentration of other greenhouse gases and help to trap heat in the greenhouse effect.

Airports themselves account for five percent of the aviation sector’s emissions, according to the IPCC. While airline companies and federal regulators are largely responsible for technology and management decisions that impact emissions from aircraft, airports around the world have committed to reducing their on-the-ground carbon emissions and electricity use to help curb the significant climate impact of the industry.

Many U.S. airports are adopting direct and indirect greenhouse gas emissions reduction measures, including large-scale solar PV installations, which are “well-suited to airports due to the available space, unobstructed terrain, and high energy demand,” in Pride’s words.

Chicago already has a 41-acre, 10 MW solar farm on the far south side. The O’Hare solar farm will be located on 30 acres north of the airport and potentially also two separate 10- and 12-acre sites. If the full 52 acres is developed, Pride said, the installation could provide up to10 percent of the airport’s electricity, depending on the type of panels chosen, their efficiency and other factors.

The solar farm won’t cost the city anything; a private company will lease the land, install and maintain the solar panels and sell energy to the aviation department under a 15-year Power Purchase Agreement (PPA) that Pride said will “allow the CDA to lock in a price for the electricity it purchases…providing predictability in its energy costs for a long period of time.”

Pride said representatives of more than 50 companies attended a meeting about the project in July, and a request for proposals is open through the end of September. The aviation department will recommend one of the proposals to the city council for approval by the aviation committee and then the full council. Construction is slated to begin in 2013 and be complete by 2016.

O’Hare already has a solar thermal installation on its fire department station, with 10 solar thermal collectors installed in 2006 that provide the building’s hot water. Chicago’s other airport, Midway International, has 24 wind turbines on its elevated parking structure.

Among other measures touted by the aviation department, Chicago’s airports have installed eight electric vehicle charging stations – one that can fully charge a vehicle in half an hour, and seven that charge a vehicle in three to eight hours. And the department says installing 1,100 efficient runway lights and 2,400 interior lights will save enough energy to power 68 homes.

Promotional videos add that the installation of water bottle filling stations past security avoids the emission of 27,000 tons of carbon dioxide a year, presumably in the bottling and transport of disposable water bottles, though it is unclear how many passengers using the filling stations would actually have bought water otherwise.

Even the most innovative improvements at airports in the Midwest and elsewhere could be a relative drop in the bucket if air traffic continues to grow without major regulatory, technology and corporate behavior changes in the U.S. and abroad.

A 1999 IPCC report warns of greatly increased emissions from aviation in spite of technology and efficiency improvements, because of the sector’s projected growth (though these projections were made before the global economic crisis).

As the IPCC report notes, aircraft emissions can be reduced substantially through increased engine efficiency, more streamlined or lighter aircraft design, cleaner (lower sulfur) fuel or alternate fuels such as hydrogen and biofuels. Air traffic control management practices and simply reducing the total number of flights could also cut down on emissions. But these measures are basically matters of federal regulation and airline company policy; individual airports or city administrations have little power over such factors.

The International Air Traffic Association, which represents 230 airlines in 125 countries, in 2007 adopted a carbon emissions reduction platform based on improvements in technology, infrastructure and management (including air traffic control), combined with economic incentives. The plan has to do mainly with the role of airline companies and the federal government, though airports and municipal aviation agencies like those in Chicago could figure in.

Pride said the project, “holds promise for biomass feedstock, technology development, job creation and sustainable commercialization. MASBI will deliver a comprehensive evaluation of the region’s biofuel potential and a plan to support regional and national needs in a responsible manner.”