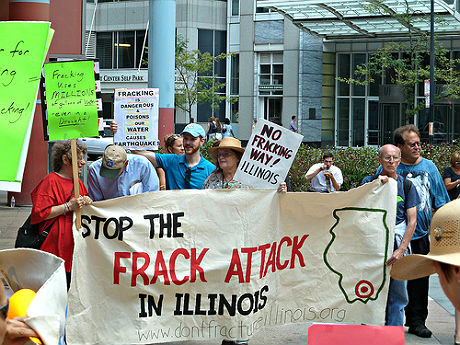 Anti-fracking protesters in Chicago on July 30. (Photo by Eric B, via Creative Commons)

The oil and gas industry and environmental groups may not agree on much, but they do agree legislation is needed to regulate hydraulic fracturing in Illinois as companies and landowners prepare for what some say could be a boom similar to North Dakota’s Bakken shale.

About $100 million has been spent and up to half a million acres leased for exploration of shale plays in the Illinois Basin that could be highly lucrative thanks to modern fracking techniques.

Environmental groups say laws are needed to preemptively protect against the kinds of environmental impact and possible water contamination reported in places like Colorado and Ohio where fracking is escalating. Industry players also want regulations in place as fracking potentially ramps up, so they know what requirements they have to meet and can plan their investments accordingly.

The Illinois legislature next convenes in late November and early December for a veto session. Both environmental and industry groups are using the downtime to lobby and discuss with legislators about the potential risks, benefits and realities of fracking, as they see it, in hopes of passing legislation in the veto session or early next year.

“Unlike places like Ohio and Pennsylvania where regulations are being imposed in the middle of fracking activity, here folks are just beginning to aggregate their resources and look at mineral rights,” said Natural Resources Defense Council (NRDC) Midwest advocacy director Tiffany Ingram.

“There’s an indication that there’s a need for regulatory certainty on both sides,” she said. “Of course as environmentalists we want to protect the things we always care about – clean water, clean air. And also for industry, they need regulatory certainty to make sure they are capitalizing their business in the right way. We’re all on uncertain footing, and it’s to all of our benefit to get it right in Illinois.”

Last summer the oil and gas industry and environmental groups both tried unsuccessfully to get bills through the Illinois legislature. A bill (SB 3280) focusing on disclosure of fracking chemicals and backed by the industry and some environmental groups unanimously passed the State Senate last session but died after the drafting of a (never introduced) House version that included much stricter and wider-ranging protections.

After that, a bill was introduced in the state House, but never voted upon, that would have imposed a two-year moratorium on hydraulic fracturing, allowing more time for the study and passage of comprehensive regulations.

A need for legislation

Environmental groups including the NRDC say there are no state laws on the books in Illinois that would specifically regulate fracking, and note that oil and gas extraction are exempt from various provisions of federal law including protections in the Safe Drinking Water Act and Clean Water Act.

He said industry players have drafted proposed legislation that covers many more facets of the industry than SB 3280 did, but is not as stringent as the House version of that bill. Along with chemical disclosure it deals with well safety, setbacks from residences and other issues.

“We took that [drafted House bill] and within that framework came up with an industry proposal that includes all of those same things but structured in a way the industry could still go out and do their job,” Richards said.

The industry’s proposed bill does not include a severance tax which would be paid to the state, as some legislators and advocates have demanded.

“In my view severance taxes don’t have anything to do with environmental protections,” Richards said.

SB 3280 would have required companies to disclose what chemicals they are using on the website FracFocus. Many landowners in areas where fracking is underway think their well water has been contaminated by the use of a wide range of chemicals — potentially including formaldehyde and other known carcinogens — to pry open spaces in shale so that oil and gas can escape during fracking. Benzene and other toxic chemicals are also known byproducts of the process.

While some environmental groups supported SB 3280, others including the NRDC opposed it, saying it did not provide meaningful safeguards. The bill required disclosure only after fracking had already begun; it allowed companies significant leeway to classify chemicals as trade secrets exempt from disclosure; and it relied on industry self-reporting rather than giving state regulators a meaningful role.

The bill also narrowly defined the parties with standing to challenge a company’s designation of chemicals as trade secrets, meaning essentially only directly-affected landowners — and not environmental groups or the general public — could press the issues.

“If there aren’t safeguards taken so proprietary data can be protected, the companies that are doing hydraulic fracturing will not come to Illinois,” said Richards. “If [disclosure regulations] are not done right, it could amount to a ban.”

NRDC Midwest legislative director Nick Magrisso said that rather than drafting a proposed bill, he would like to see comprehensive regulations developed through a participatory process involving legislators, scientists, residents, environmental groups and industry. But for this to happen, he said, a temporary moratorium on fracking is needed.

“It would not be a set of regulations negotiated in secret with input primarily from the industry – it would be an open public process with opportunity for broader public input and participation,” said NRDC staff attorney Thom Cmar.

“This is a real opportunity for Illinois that if we do take our time and get the rules right, we could set a standard that is unprecedented and moves the industry forward,” Magrisso added.

NRDC staffers have made several trips downstate to meet with legislators and will continue to do so over the fall, in part to discuss fracking technology and the concerns it raises. Meanwhile Richards said the oil and gas association is also talking with legislators about what the industry sees as misinformation about fracking, including fears raised by the documentary “Gasland.”

The association’s website features the pro-fracking documentary “Truthland.” The film’s website says the first patent for horizontal drilling was awarded in Kansas in 1947; that “every step of oil and natural gas development is directly regulated by states, the federal government or both;” and claims one of every 10 jobs created last year were linked to oil and gas extraction.

Richards said his association is also launching a public outreach campaign in Illinois similar to the “Energy in Depth” website and campaign sponsored by the Independent Petroleum Association of America. The Energy in Depth website notes that the project launched in 2009 “is focused on getting the facts out about the promise and potential of responsibly developing America’s onshore energy resource base – especially abundant sources of oil and natural gas from shale and other ‘tight’ reservoirs across the country.”

A June 2012 issue brief by the NRDC said that fracking is going on in at least 29 states, and 14 states have fracking chemical disclosure laws. In the Midwest, Indiana, Ohio, North Dakota and Michigan have disclosure laws; while Illinois, Kansas and South Dakota have fracking ongoing or on the horizon but no laws. The NRDC brief, which includes analysis of Illinois’s proposed SB 3280 law, says:

More than half of the states with hydraulic fracturing activity currently have no disclosure requirements at all. Of the existing state rules, none provide comprehensive disclosure. Enforcement of state rules is also found to be uneven… In eight of the fourteen states with existing disclosure requirements, companies may withhold information they deem confidential without any justification or oversight. Only one state has a clear process for evaluating and approving or denying trade secret exemption claims.

“The current Illinois oil and gas laws were designed decades ago to deal with conventional vertical drilling,” said Cmar. “The laws are simply not up to par, not adequate to deal with this new and more dangerous form of oil and gas exploration.”

Cmar added that each fracking operation is known to use between two and seven million gallons of water. “Where does that water come from? Once it’s used in the process, it becomes contaminated. So it’s a potential real stress on the water supply in places in southern Illinois that are already experiencing serious droughts.”

Magrisso said it is unclear if the “political will exists” for a moratorium on fracking in Illinois, and he hopes legislators and residents aren’t dissuaded from passing meaningful regulations by promises of quick money and industry pressure.

“If you look at states where fracking has happened, and look at the regulatory schemes that exist in those states, no one has addressed it comprehensively and adequately,” Magrisso said. “We don’t have a drop-in template of what regulations would look like. So it’s very easy for the industry to push back and say the things they would propose or submit to are above and beyond what other states have done. That may be true, but that floor is so low.”

Oil and gas extraction has a long history in Illinois, as industry proponents often point out, but in recent decades it has not been very profitable. A 2009 study commissioned by the oil and gas association notes that Illinois then produced only a small amount of natural gas, usually in conjunction with oil, and more than 90 percent of Illinois’s 16,000 oil wells are considered “marginal” operations that produce only one or two barrels a day. Modern fracking techniques could change all this, allowing operators to cost-effectively remove oil and gas deposits previously considered impossible or unprofitable.

“The potential is there for this to be a significant economic development for southern Illinois,” said Richards. “But the first well hasn’t been drilled yet, so we have a long way to go before it’s proven it will work. All we’re asking as an industry is don’t kill the golden goose before it has a chance to lay the first egg.”