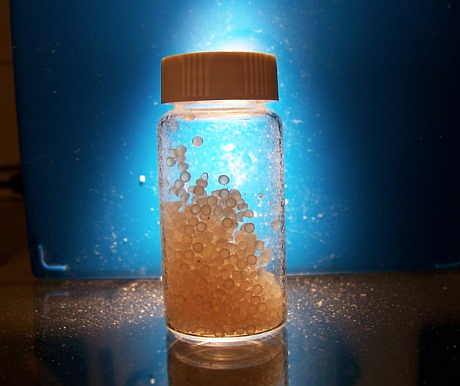 A new biotechnology developed by a team of University of Minnesota scientists could help clean up wastewater from hydraulic fracturing, preventing contamination of rivers, streams, lakes, and even drinking water with toxic chemicals from coal and shale beds.

The new method employs chemical-eating bacteria encased in a silica gel. The contaminants from the fracking wastewater slip inside the gel, where they are destroyed by enzymes in the bacteria. The bacteria remain encapsulated and do not contaminate the wastewater themselves, said Larry Wackett, a professor of biochemistry, molecular biology and biophysics at the University of Minnesota who led the effort.

The research has attracted a $600,000 grant from a National Science Foundation program that pairs academic researchers developing innovative technologies with companies that can commercialize them. When their technology is ready to be scaled up, the University of Minnesota team plans to license it to Tundra Companies of White Bear Lake, Minnesota, which would manufacture it.

The same biotechnology could also be used to encapsulate other types of bacteria that help recover natural gas from depleted coal beds. Luca Technologies of Boulder, Colorado, would license it for that purpose.

For the NSF grant, “we were supposed to make partnerships with small companies whereby if we developed technology platform, the company could scale this up and make it a business,” Wackett said.

To pry open cracks in shale and obtain oil or natural gas, frackers force millions of gallons of water mixed with sand and chemicals into cracks in underground coal or shale beds. Up to 40 percent of what goes down then comes up, and the contaminated water, which contains high levels of salts and potentially dangerous chemicals, must be disposed of.

The fracking industry has maintained that they dispose of fracking water safely and according to state and federal regulations. But recent investigations by journalists and scientists suggest that the hazards may be underestimated, and that polluted fracking water is making its way into the nation’s waterways, jeopardizing health and the environment.

Today fracking wastewater is often disposed of by injecting it back deep into the ground, but an investigation by ProPublica revealed evidence of lax regulation of this practice and frequent attempts by industry to circumvent the disposal rules that do exist.

In the heavily fracked Marcellus Shale region, which includes upstate New York and Pennsylvania, it’s often sent for treatment to sewage treatments plants that were not designed for the task, according to an in-depth 2011 investigation by the New York Times. More than a few of those sewage treatment plants are upstream of drinking water plants, the Times found.

Similarly, an EPA investigation [PDF] of a Wyoming gas field documented contamination of nearby drinking groundwater aquifer by hydrocarbons, and health authorities warned against drinking the water.

And in August, scientists at the Stony Brook University in New York reported in the journal Risk Analysis [PDF] that the disposal of wastewater from fracking poses a large risk of water pollution and drinking water contamination. The authors, Daniel Rozell and Sheldon Reaven, focused on fracking in the Marcellus Shale. In their report, they concluded that “future research efforts should be focused primarily on wastewater disposal and specifically on the efficacy of contaminant removal by industrial and municipal wastewater treatment facilities.”

As it turned out, Wackett’s team was already doing this research. “We think we can help the situation by having a treatment that does the job and is less expensive,” he said.

Wackett has spent years investigating how microbes break down various toxic chemicals in the environment. Over the last several years a graduate student in his laboratory, Eduardo Reategui, had come up with a way to encapsulate live bacteria that break down the herbicide atrazine. They melted silicon oxide and created what in essence was a sand shell around the bacteria.

“The results were remarkable,” Wackett said. “Normally if you have bacteria that eat pollutants, they [eventually] die out and you have to replenish them. But inside the silica they stayed active.”

Wackett, Reategui, and two other University of Minnesota biotechnologists, Michael Sadowsky and Alptekin Aksan, published the results in January in the journal Applied Microbiology and Biotechnology.  As they were wrapping up that study, there was a lot of press about hydraulic fracturing and the hazards posed by its contaminated wastewater.

“We saw that and thought this might be a good application of these organisms,” Wackett said.

When drilling companies do treat fracking waste water, they use separators to let bits and pieces of shale settle out, then heat that water to make the water evaporate, leaving all the chemicals behind as a sludge, which is then disposed of in a landfill, Wackett explained. But that method has two problems. It requires a lot of energy to boil off the water to make the sludge, which tends to make the process expensive. And it only transfers the chemicals to a landfill rather than breaking them down.

Soon after their paper on caged herbicide-eating bacteria was published, Wackett got a grant from the University of Minnesota to explore ways to mitigate the environmental impacts of fracking. He knew that many species of bacteria are known that break down chemicals that are toxic to humans, so they began encapsulating some of them in sand shells and seeing how well they could break down chemicals.

To test this approach, two researchers on Wackett’s team, Lisa Kasinkas and Lisa Strong, created microcapsules packed with a bacterium called Pseudomonas to break down ring-shaped chemicals that are known to cause cancer: benzene, toluene, ethyl benzene and xylene. They tested a bacterium called Marinobacter to break down other chemicals common in diesel fuel, and another bacterium, Sphingomonas, to break down a third class of cancer-causing chemicals. In all cases, the bacteria gobbled up the chemicals while trapped in the sand shell.

In the meantime, the researchers got the National Science Foundation funding, which gave them two years to get this technology ready for prime time. Wackett, Sadowsky and Aksan are assembling more than a dozen researchers to study how to put the bacteria in, and what makes them stay active, inside the sand shells. By doing this legwork, they hope to create a platform technology to create a mix of products, each of which use caged bacteria to break down fracking waste water, factory runoff, polluted farm runoff, and more.

Robert Elde, a dean at the university, is working to make connections with businesses that might license the technology and scale it up. An engineering company hired to clean up wastewater might buy it, as might a subcontractor hired by the engineering company, Wackett said.

Wackett and his university are remaining neutral in the fracking debate.  “Our view is if we’re going to do it, let’s find the best way,” Wackett said.