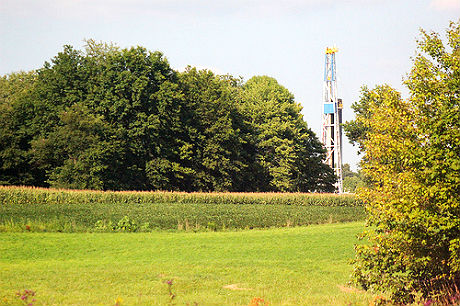 A natural gas well in Pennsylvania. (Photo by WCN 24/7 via Creative Commons)

As hydraulic fracturing for natural gas has taken off, communities have scrambled to control fracking within their borders, while the oil and gas industry has fought in state legislatures and courts to stop communities from hampering their operations.

The Natural Resources Defense Council hopes its new legal and policy defense fund, which was announced last Friday, will boost communities in their efforts.

“It’s become clear to us that there’s a large need for a project like this,” says Henry Henderson, director of NRDC’s Midwest program. “There are communities that really need and are asking for assistance,” he said.

Most natural gas extraction these days is done by fracking, and the drilling technique has spread so rapidly that it has caused prices of natural gas to fall to historic lows. But the laws and regulations that deal with it have not always kept pace. That has led NRDC to oppose the growth of fracking until effective safeguards have been adopted.

NRDC Community Fracking Defense Project, as the group calls it, will employ 12 NRDC staffers, including geologists, health experts, policy advocates who work with state legislatures, and “a corps of lawyers,” Henderson said.

The group has launched the project in five states: New York, Pennsylvania, and Ohio, which are already heavily affected by fracking, and Illinois and North Carolina, where the controversial gas drilling operations may soon start.

Current state laws often make it difficult for communities to understand what drilling companies fracking locally are doing, and to control it within their jurisdictions, says Sandy Buchanan, executive director of Ohio Citizen Action.

“In a state like Ohio, where the oil and gas industry has been systematically trying to do away” with the rights of communities to control gas drilling within their borders, it’s important to support those rights,” Buchanan said.

The NRDC and Ohio Citizen Action are both members of RE-AMP, which also publishes Midwest Energy News.

Buchanan cites two oil and gas industry-supported bills that became Ohio law in 2004 and 2010. Together the laws preempted communities from using zoning to establish restrictions on gas drilling operations, she said. In addition, in 2011 Gov. John Kasich signed into law legislation allowing drilling companies to frack for gas in Ohio state parks. And in the last session of the state legislature, lawmakers rejected a bill supported by NRDC that would have forced frackers to disclose which chemicals they’re injecting into the ground before they get a permit to drill, Henderson said.

Meanwhile, large gas companies and wildcatters are setting up and drilling throughout the state, and large amounts of wastewater, with a mix of chemicals known only to the gas drilling companies, are being injected deep into the ground.

That makes it all the more important to force frackers to disclose more about what they’re doing, Henderson said.

“If we do not know what’s being injected into our ground, we cannot properly prepare or protect ourselves against property damage, damage to water, et cetera,” he added.

And real damage has occurred. “If you’ve got an aquifer you historically depended on and all of a sudden you can’t use it for drinking or irrigating your farm, you’ve got a very significant problem. And we’ve seen that happen,” Henderson said.

NRDC’s lawyers have already been actively working with communities to tighten local controls on fracking. They’ve advised the upstate New York town of Meredith on how to create a fracking ban that would withstand legal challenges. They’ve filed an amicus brief to support seven Pennsylvania towns that sued to overturn a state law that restricted their rights to control fracking in their communities, Henderson said.

In the Midwest, NRDC has pushed for more public participation in Ohio’s regulatory process, and more disclosure by the industry about what it’s doing during fracking and waste-disposal operations. And in Illinois, where fracking has not yet begun, NRDC is conducting outreach to communities “to provide similar kinds of assistance before fracking drills break ground,” Henderson said.

In all five states where NRDC will work, the group will push for laws and rules that accomplish the same basic goals, Henderson said. These include notification about what chemicals are being injected in the rock base beneath a community, which will allow before-and-after testing by landowners. The group wants state laws that require frackers give advance notice about drilling operations. And they want communities to be able to pass zoning ordinances and other local laws that rein in frackers.

“Just because it’s a big economic activity, doesn’t mean citizens should not be able to defend themselves,” Henderson said. “We want to give people tools to control their own fate.”