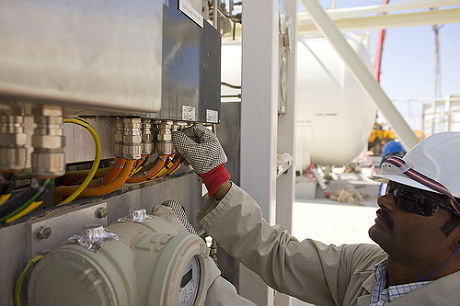 (Photo by Shell via Creative Commons)

A key carbon-cutting technology may have met its savior: domestic oil drilling.

Last week, senators released a bill that would sweeten the incentive to capture carbon dioxide from smokestacks, as long as the gas is stuffed underground to produce oil.

Supporters of the bill believe it could achieve something else, too: a new lease on life for carbon capture and sequestration, or CCS.

That technology, which many consider essential to containing climate change, has struggled to lower its costs and gain wide adoption. Now some policymakers, environmentalists and energy producers think CCS could piggyback on the allure of oil production.

“We’ve seen governments try to put money forward and incentivize electric industries and other industrial sectors to try capturing the CO2, and it hasn’t been horribly successful,” said Sean McCoy, an analyst with the International Energy Agency. “It’s working in some places, but not everywhere.”

McCoy is not directly involved with the bill in the U.S. Senate, but he is asking the same question its proponents are: “Can we kind of create a market pull? If we create a market for CO2 that doesn’t exist today, can we get it into the ground?”

Oil companies have used enhanced oil recovery, or EOR, for decades. The method targets old and declining oil fields. When CO2 is pumped into the ground, it effectively loosens some of the harder-to-reach oil so it can be brought to the surface.

Even in the United States, which leads the world in EOR production, the method has never been considered a leading source of oil. But in recent decades, geologists and oil companies have begun wondering whether it can play a larger role.

“People used to talk about a fairly modest potential,” said Judi Greenwald, vice president for technology and innovation at the Center for Climate and Energy Solutions. “Now it looks like you could just do a huge amount of CO2 EOR and that would help you enormously on the oil production side.”

In May, a Department of Energy official said that EOR accounts for about 5 percent of U.S. oil production currently, but an expanded practice could supply 20 to 30 percent (ClimateWire, May 2).

Yet one limitation, much to the surprise of environmentalists, is the shortage of CO2.

Steve Melzer knows it well. He is an independent consultant who works almost exclusively with energy companies digging for crude this way.

About two-thirds of the CO2 they use comes from natural sources in the ground, he said. Another 20 percent comes from CO2 that arises naturally during natural-gas drilling.

Increasingly, they are looking to man-made sources of CO2 to provide ample supplies — and hopefully reduce its market price.

Smokestacks from factories and power plants fit the bill. And that is where carbon-capture technology comes in.

“That’s what we all got our fingers crossed [for], that we figure out how to do that so that the price [of CO2] isn’t too steep,” Melzer said.

To help that happen, Sens. Kent Conrad (D-N.D.), Mike Enzi (R-Wyo.) and Jay Rockefeller (D-W.Va.) have co-sponsored a bill that would make an “administrative fix” to an existing law. There already exists a $10 tax credit for each captured metric ton of CO2 that goes to EOR. The senators’ bill would aim to make this tax credit easier to access for CO2 emitters (E&ENews PM, Sept. 20).

Supporters of the bill say this is just one step toward catalyzing a new market that could very quickly be taken over by the private sector.

As the thinking goes, EOR could provide a huge new market for CO2, providing a financial incentive for factories and power plants to capture the gas.

That would target a major weakness of CCS: the current high cost of capturing CO2. If power plants and factories could sell the CO2 on the market, that could help them cover some of the high cost of the technology.

The more that happens, the more likely CCS could benefit from the “learning effect,” or the tendency for a technology to get cheaper as industry gets more practice with it.

How much cheaper? The National Enhanced Oil Recovery Initiative, which proposed the tax incentive for EOR last February, has estimates.

NEORI modeled the learning effect for CCS if policymakers implemented the tax incentive presented in the Senate, as well as several other measures to help EOR.

As the power sector causes some 40 percent of U.S. carbon emissions, it would offer the biggest potential addition to CO2 supplies. NEORI has estimated that the tax credit alone would quadruple EOR oil production to 400 million barrels while cutting CO2 emissions by 4 billion metric tons over 40 years.

The group believes it has another pitch, too: that the private sector is poised to lead the way, if the government provides a spark.

The $10-per-ton price is “a little bit of assist,” Greenwald of C2ES said. If the technology moves down the learning curve rapidly, the market could take over. Oil companies would line up to buy the new, cheaper CO2. To get into that market, more and more factories would use carbon-capture technology, reducing its costs even further.

Some envision a massive network of pipelines connecting the industrial smokestacks of the Midwest to the EOR-ready oil fields of the Gulf Coast and Mountain West.

But McCoy, of IEA, said this whole vision assumes carbon-capture is the biggest challenge.

“Word on the street is there is a lot of unmet demand for CO2. So the question is, what is the barrier that prevents the suppliers and the purchasers from coming together and making the deals that they need to get the CO2 going?” he said. “I think that there’s something going on in the middle there. It’s not clear to me what that is.”

There is one hairy question left for the environmentalists: Does it really benefit the climate to stuff CO2 underground if it just produces more fossil fuels?

Greenwald, McCoy of IEA and others said it depends on whether EOR is replacing “dirtier” barrels of oil. If the United States uses one more barrel of oil from EOR, and one less barrel of oil from a more energy-intensive source such as oil sands, these experts reckon, there is a net benefit to the climate. They caution that these kinds of estimates are very difficult to pin down.

Of course, their other argument is that the end justifies the means: If CCS takes off, it will be ready in the next few decades for wide-scale adoption and a serious crack at international climate targets.