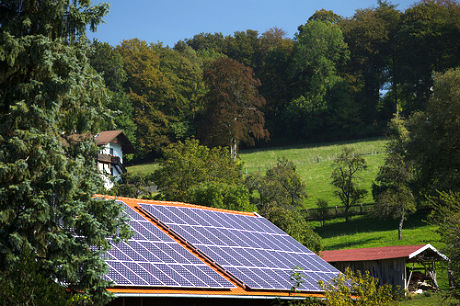 Editor’s note: Kari Lydersen is spending two weeks in Germany and the UK on a Climate Media fellowship from the Heinrich Böll Foundation North America.

DUSSELDORF, Germany — Renewable energy proponents in the Midwest often point to Germany as a place where solar power can thrive under less-than-ideal conditions.

Germany is known for long gloomy winters, and even sunny summer days are often punctuated with torrential downpours from drifting heavy gray clouds. A map from the National Renewable Energy Laboratory (see page 53 of this report) shows Germany’s solar potential as much lower than the Midwest and basically equivalent to Alaska.

Yet widespread solar photovoltaic (PV) installation has been key to Germany’s rapid shift to renewable energy, which now provides about 25 percent of the country’s total electricity. With more than 25 GW divided among more than a million installations, Germany has about a third of the world’s total solar PV capacity and leads the world in total installed capacity. The U.S., by comparison, has about 5.7 GW of installed solar capacity, and the Midwest lags far behind sunnier climes like California and Arizona.

According to the Solar Energies Industry Association, Illinois ranks sixth among U.S. states in installed solar PV capacity. Ohio and Wisconsin rank 17th and 23rd with relatively minimal power installed, and no other Midwestern states are in the top 25.

German Green Party elected officials and clean energy proponents interviewed this month in Berlin, Dusseldorf and Duren said Germany should serve as an inspiration showing that solar could be an important renewable source for the Midwest, particularly through the widespread adoption of rooftop solar panels.

A jaunt through the farm country in the Ruhr region in western Germany – the cradle of the country’s coal industry – shows just how the trend has taken off. The steep, wide tiled roofs of blocky farm houses and barns are blanketed in solar panels. Right next to a sprawling coal-fired plant burning particularly dirty lignite “brown coal” outside the town of Duren, rows of sleek, shiny solar panels are mounted on county land – a stark contrast.

But the past year in Germany has also shown just how tricky it can be to navigate complicated political, economic and social considerations in promoting and expanding solar power – challenges that Americans may also increasingly face as solar becomes more widespread.

There is a wave of “PV bashing” going on right now in Germany, according to Mona Bricke, European anti-coal campaign coordinator for the environmental NGO Klima Allianz Deutschland.

The Environment Minister, Christian Democrat Peter Altmaier, has said that solar growth needs to be curtailed to avoid rising energy prices and to allow more financing to go to wind, hydro and biomass power, which offer lower cost per kilowatt hour.

Critics also note that the installed capacity of solar is misleading since the panels only generate that amount of power under optimal conditions. In July, the magazine Der Spiegel wrote: “In reality, all of Germany’s photovoltaic arrays together generate less power than two nuclear reactors. And they can’t even replace those reactors unless they have enough storage capacity available.”

Also, part of the backlash is because of the surcharge on electricity bills that is essentially used to fund solar, wind and other renewable energy development, a charge that is scheduled to rise significantly in mid-October.

Solar took off thanks to the country’s feed-in tariff (FIT) originally created two decades ago and increased and enshrined in 2000 as part of the German Renewable Energy Act.

Under the FIT, electricity producers including regular businesses and homeowners with rooftop PV panels are for 20 years paid a certain price per kilowatt hour for renewable energy they generate. The rate paid depends on the type of power. Solar has commanded a higher price than wind, for example, since it is more expensive to produce.

The government periodically adjusts payments depending on market forces and other factors, and this year the rates for solar were substantially reduced since the technology has gotten so much cheaper. The payments are financed by ratepayers, who pay the extra charge added to their electric bill.

In October that charge will likely go up from a current rate of about 3.5 cents per kilowatt hour to about 5 cents per kilowatt hour, based on the need to make the feed-in tariff payments and other new payouts, including a “market bonus” for renewable energy producers who want to sell their electricity on the electricity market themselves, and a “repowering bonus” for the replacement of older wind turbines with new, more powerful ones.

The new charges and rate increase worry Wibke Brems, a legislator in the state of North-Rhine Westphalia who is also a spokesperson on energy and climate for the Green Party. Several experts said that residents upset about the increasing electricity charge are directing their anger specifically at solar power.

Before going into politics, Brems worked for solar PV companies, and nurturing renewable energy growth was one of her motivations to seek elected office. But now she worries the solar industry’s success under the feed-in tariff has contributed to a backlash and exacerbated class divisions.

“There’s the issue of energy poverty, will some low-income people really have trouble affording electricity?” said Brems at the Parliament office in Dusseldorf, a blanket of gray clouds making the Rhine River outside the window a steely gray.

Bricke noted that the redistribution of costs for renewable energy, as the surcharge is often described, has sparked frustration among “lower-income people who live in apartments, who are paying to support solar energy, even if they can’t take advantage of solar panels like the dentist making a good salary with a house.”

Brems and other Green Party officials, and many regular citizens, are also not pleased with the implementation of a policy that exempts heavy energy users – including many of the industrial outfits in the Ruhr region – from paying the renewable energy surcharge.

The exemption was originally designed to protect manufacturers from being driven out of business by rivals in China or other European countries that don’t need to pay extra for their energy. But the exemption has been misused by companies that don’t need it, in Brems’ opinion, including Germany’s lignite coal industry, which does not compete directly with mining operations in other countries.

“Low-income people, people on social security are having to pay the full cost for redistribution and actually feel like they are paying for the energy intensive industries,” Brems said.

She added that in an especially ironic twist, some companies have also intentionally increased their electricity use so they will qualify as “intensive energy users” eligible for the exception from the surcharge.

When solar, wind or other renewable installations are producing electricity they get priority access to Germany’s grid, meaning coal- or gas-fired plants sell less energy when there is substantial renewable energy available to meet demand.

A 2009 European Union directive orders all member countries to allow renewables priority access to the grid, leaving it up to individual countries how to design and enforce the measure. Clean energy proponents say that as more and more renewables are installed, that means fossil fuel-fired energy will become less needed and hence less profitable. On the afternoon of Sept. 14, for example, renewables provided a full 45 percent of Germany’s energy.

“When the sun is shining there is so much electricity that it’s almost all consumers need,” said Hans-Josef Fell, a member of the national German Bundestag (Parliament) and a Green Party energy spokesman.

But the four major utility companies that own the bulk of the nation’s grid are not fans of priority access for renewables, and clean energy proponents also fear a major blow to solar and wind energy if the preferential grid access policy is curbed, which would be legislatively difficult but possible.

The concept of priority access does not really apply in the U.S., where access to the grid is structured differently. But renewable energy development in many states has been aided by the mandate that generation companies cannot also own power lines, so all electricity producers essentially have access to the transmission lines.

Meanwhile in Germany the grid is also in need of widespread upgrades to better facilitate distributed solar generation, so that individual homes can more efficiently send power back to the grid along with consuming power.

Germany’s renewable energy boom – going from 6 percent renewable energy in 2000, much of that from hydropower, to 25 percent today – has also created a “green jobs” boom, including through the manufacturing of solar panels, wind turbines and their components, and installation of renewable systems.

There are about 380,000 people employed in renewable energy-related jobs, according to the Green Party, compared to only about 30,000 still employed in the coal industry – a number that will shrink further with the end of government subsidies for “hard coal” (as opposed to lignite coal) in 2018.

Germany’s solar industry, however, has apparently taken a hit in the last year, according to Brems and other expert sources. Earlier in the year, it was estimated as many as 120,000 German solar jobs could be lost because of competition from China and decreasing demand for solar panels in Germany.

For more than a year, Germans have known a significant reduction in the feed-in tariff payments for solar energy was in the works, leading to a nationwide rushed to install solar panels and lock in their long-term contracts. In December  2011 as the feed-in tariff cuts were being discussed, a full 7.5 gigawatts of new solar were installed.

After the boom of panel installation, demand plummeted and the industry suffered.

Job losses are an especially acute concern in the Ruhr region in North-Rhine Westphalia, a former coal mining region and current industrial hub where a number of solar manufacturing companies are located.

After much debate in Parliament, including a rejection of the initial steep reduction plan, this summer legislators decided to reduce the solar feed-in tariff payments to different degrees and on different schedules for different types of installations —  a decision ultimately agreed to as a compromise. Green Party legislators said they think a reduction in solar payments was needed, and they think the industry can survive the change.

The Ruhr region is now home to a number of major universities specializing in technology, based on the area’s industrial history. That makes it a fitting place for research and development of cutting-edge solar equipment.

Though some solar companies have reportedly suffered due to cheap competition from China and falling domestic demand after the glut of panel installation, proponents say that Germany’s technical expertise can continue driving new innovations in solar technology and batteries for solar energy storage.

Oliver Krischer is a Green member of the national Bundestag from the North-Rhine Westphalia town of Duren, home to both power plants burning dirty lignite coal, the county solar farm and many rooftop solar panels. He installed solar panels on his rooftop 12 years ago, and said the cost of producing solar energy has gone down about 70 percent since then.

Given that Germany is already so saturated with solar installations, and that China can produce the proven technologies more cheaply, Krischer said Germany’s continued solar energy job market depends in part on the spread of solar power around the world, so that Germany can develop and export new solar technologies.

“Everyone knows energy production from nuclear and fossil fuels can’t go on forever, so how are we going to change without destroying the economy?” he asked. “This is one way.”