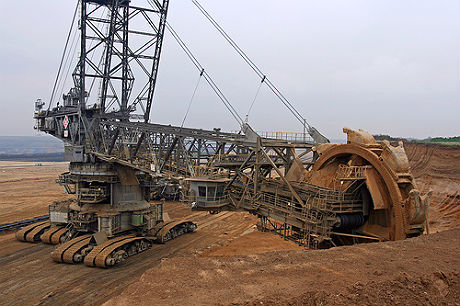 The Garzweiler lignite mine in North Rhine-Westphalia, Germany. (Photo by Bert Kaufmann via Creative Commons)

Editor’s note: Kari Lydersen is spending two weeks in Germany and the UK on a Climate Media fellowship from the Heinrich Böll Foundation North America.

NORTH RHINE-WESTPHALIA, Germany — In every direction the horizon is decorated with spinning wind turbines – among the thousands nationwide that have made Germany a global poster child for renewable energy.

Thanks to widespread installation of wind and solar power, the country gets about 25 percent of its electricity from renewable sources and the government has promised that number will reach 35 percent by 2030, and 80 percent by 2050.

But on these small roads in the state of North Rhine-Westphalia in western Germany, the images of wind turbines in the distance and solar panels on farmhouse roofs are overwhelmed by another source of energy. That would be the vast, gaping pits covering more than a hundred square miles total where the company RWE Power is harvesting “brown coal” (or “braunkohle”) that is burned in nearby massive power plants, with towering brick smokestacks and stocky hourglass-shaped cooling towers releasing blooms of white steam.

Bundestag member Oliver Krischer is deeply concerned about the impacts of brown coal mining on his hometown in Germany. (Photo by Kari Lydersen / Midwest Energy News)

As a child growing up in the nearby town of Duren, Oliver Krischer, a Green Party member of the national Parliament (Bundestag), thought that such plants existed specifically to produce clouds. Now he understands well the damaging environmental, health and social impacts of brown coal extraction and burning; it’s part of his motivation for calling for 100 percent renewable electricity generation by 2040 or sooner.

But while old coal plants are closing and new coal proposals are being tabled across the Midwest and the rest of the U.S., Germany is seeing a resurgence of reliance on coal-fired power. In May the Breakthrough Institute, a U.S. think tank focused on sustainable energy, reported that Germany’s coal use is expected to grow 13.5 percent this year.

According to the NGO Klima Allianz, which opposes coal power, 37 coal plants were proposed in 2007 and 19 of those proposals have been killed, because of market forces, legal challenges and opposition. Between seven and nine new coal plants are scheduled to come online in coming years, according to Klima Allianz Deutschland anti-coal campaign coordinator Mona Bricke, and the future of other proposals is unclear.

In the U.S. it is cheap natural gas, along with stricter environmental regulations, reducing the role of coal in the energy mix. In Germany, however, natural gas is not cheap and the country’s decision post-Fukushima to close all nuclear plants by 2022 means many are looking to coal to pick up the slack. And mostly not the type of coal that Americans are used to, but rather brown lignite coal which is softer, wetter and has higher concentrations of sulfur and ash than the bituminous coal typically mined in the U.S.

Much of the natural gas used in Europe is purchased through long-term contracts negotiated under an increasingly archaic policy where the price of gas was pegged to the price of oil, making it currently expensive.

Hydraulic fracturing has also not taken off in Germany or most other European countries, in part because of political opposition driven by pollution stories from the U.S.

Some energy experts say that natural gas should be included in the feed-in tariff program which has driven the explosion of renewables, since it burns cleaner and emits much less carbon dioxide than coal. The current low price of carbon credits under the European Union Emissions Trading System (ETS) is also conducive to continued reliance on coal. If carbon credits were more expensive it would be a boost to gas-fired plants.

In May, Reuters reported: “Electricity from coal for sale in 2013 is more than 16 euros per megawatt-hour (MWh) more profitable than generating it from gas … Gas-fired power plants, in fact, lose money during baseload hours (24-hour supply), only turning a profit at the higher-priced hours of peak demand.”

The decision to close all nuclear plants within a decade was popular nationwide, in a country where a large, well-organized anti-nuclear movement has long blocked trains carrying nuclear waste and otherwise made their opposition known.

Meanwhile, what little remains of the country’s “hard coal” or “stone coal” industry will be basically dead by 2018 when government subsidies expire. Already almost all the hard coal mines have closed since mining the deep seams is three to four times more expensive than importing hard coal from South Africa, Poland, Russia or other countries. This imported coal is burned in coal-fired power plants that produced 18.6 percent of the country’s electricity in 2011, according to Reuters.

In 2011 brown coal accounted for 24 percent of the country’s electricity production, with renewables contributing 20 percent. Brown coal mining and burning is scheduled to continue through 2045 under government agreements, but many opponents think it will actually be longer since new brown coal pit mines and new coal-fired plants are in the works.

Standing on the edge of North-Rhine Westphalia’s largest brown coal pit, Hambach, activist Florian Hurtig describes what he sees as a battle for the region’s future. Since April he and other activists have been occupying the forest on the edge of the pit, sleeping in tree houses constructed in the oaks that are scheduled for clear-cutting for RWE’s planned ongoing expansion of the mine.

“There’s all this talk about renewables, but if you want to stop climate change it’s not just about more renewables, you need to use less fossil fuels,” said Hurtig, 25, who moved to Duren specifically to fight the expansion of brown coal strip mines. “We need more decentralized energy production and we need to rethink how we use energy, how much we use and what we use it for.”

RWE’s four brown coal pits in the region produce about 100 million tons or more of coal per year. The pits have systematically spread across the landscape, chewing up potato and corn fields, forests and villages in their path. Near the Inden mine outside Duren, Krischer takes a drive through the town of Pier, now a ghost town with windows boarded up and faded signs sagging from storefronts, as the residents were forced to vacate to make way for the mine expansion.

“It’s not so much the economic impact but the social impact,” Krischer said. “In Germany people live in their house for a lifetime, it’s not like the U.S. Germans have deep roots in the soil. To move from your home can be devastating, especially for an older person.”

On its website RWE Power describes a dedication to cleaner coal-burning technology, including a Coal Innovation Centre that supports research in sustainable uses of carbon dioxide from coal-fired plants and cutting edge pollution controls.

It notes that both its brown coal and “hard coal” power plants have achieved power production efficiency rates significantly above average, meaning less pollution for the amount of power produced. RWE also is investing in renewables and pilot projects for carbon capture and sequestration, which it eventually plans to utilize at its coal plants.

Critics of the coal industry say that unlike in the U.S., in Germany there is actually relatively little opposition to coal mining and coal-fired power or awareness of the health and environmental impacts of coal.

People have mined coal in North Rhine-Westphalia for at least 700 years, as expansive mining museums in the region show, and many still work in the industry today. And the long-standing focus on nuclear opposition has meant little scrutiny of the coal industry, some activists and NGO leaders say. So they are looking to American grassroots, environmental, health and law groups for information and education about the impacts of coal and how to fight the coal industry.

Krischer and some other environmental and policy leaders think that stories in the international press of a resurgence of coal in Germany are exaggerated, and that renewables just need a little time to catch up to fill the gap created by nuclear plant closings. They note the German law that guarantees renewable energy “priority access” to the grid ahead of coal-fired power, so if enough renewable power is being generated coal plants won’t be able to sell as much of their electricity and hence would theoretically become less profitable.

Key to phasing out coal, they say, is improving the grid to facilitate more solar and wind installation and decreasing energy demand through improved efficiency. Many also expect natural gas prices in Europe will fall, making gas a viable “bridge” energy source – as many American energy experts advocate in the U.S. — until renewables are scaled up further.

“The coal plants still being built were planned five or more years ago and were almost finished,” before renewables started booming, said Bricke. “They’ll come online, but they’ll just be running to recover costs. The hard coal plants being built will not be economically viable.”

But RWE Power’s website describes coal as an important source of future energy in Germany, and says that’s why the company is investing so much in new technologies. The website says: