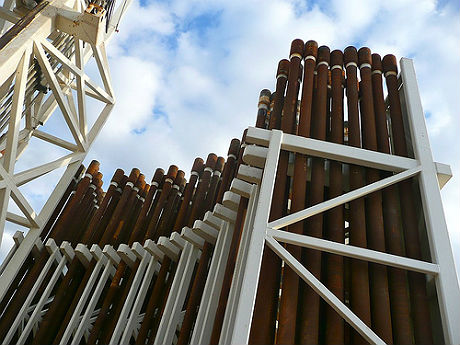 First in a three-part series.

One Achilles’ heel of the shale gas boom is the potential failure of a vital well construction operation known simply as “the cement job.”

Every state with oil and gas operations requires drillers to pump cement into the spaces between the well hole and the outside of the steel pipe casing at a number of critical points hundreds of feet down. The cement sheaths are installed in order to form impenetrable barriers blocking methane, brackish water or drilling chemicals from migrating up the space around the drill pipe to contaminate drinking water aquifers higher up.

“The key to well integrity is a good cement job,” said Stephanie Meadows, a senior policy adviser at the American Petroleum Institute, which has developed a detailed “best practices” manual for the complex operation.

But errors, mishaps or geological traps can leave channels running through the cement. Industrywide, between 1 and 5 percent of initial cement jobs require repairs and workovers, King reported. If undetected and unrepaired, cement fissures could be pathways for contamination of drinking water aquifers in worst-case scenarios, King said.

“Although there is virtually zero chance of fracturing into a fresh water supply from a deep well, there is a valid concern about even low incident potential events (in the range of 1-in-10,000 to 1-in-100,000), such as spills, leaks, cement channels and traffic accidents that could contaminate either surface or subsurface water,” King said.

A detailed review of shale gas regulations this year by Resources for the Future, a Washington, D.C., research organization, documents widespread differences in regulations and practices governing shale gas development, including cementing operations.

RFF reported that of 31 states with shale gas operations, 14 require that cementing be placed a specific distance below the lowest depth of designated water aquifers — and those distances vary from 30 to 500 feet. Ten other states set well-by-well requirements when issuing permits, often as a general obligation to “protect all freshwater bearing zones” with no specified standard depths.

Alabama, California, Louisiana, Mississippi and South Dakota do not regulate cementing depths based on water table levels, RFF said in an update issued last week of its study.

“There is this wide difference in regulatory approaches across the states,” said Nathan Richardson, an RFF resident scholar and part of the research team.

As shale gas development accelerates across the country, the wide variety in state practices — and lack of ready public access to state drilling records bearing on public health concerns — weighs on the public, according to the Richardson and RFF colleagues.

“Drilling permits may require the cementing at specific points. But what is safe? And how is that determined by drillers and regulators?” Richardson said. “There may not be a problem, but the public thinks there is, and the lack of transparency is troubling.”

The importance of the cementing process prompted an expert panel advising Energy Secretary Steven Chu to urge the oil and gas industry to adopt “best practices” in cement placement and other critical well construction operations, backed by regulators’ inspections to confirm that defective barriers have been repaired.

So far, however, the primary industry effort to spotlight best practices has met a mixed response, at best, in the states.

Beginning in 2007, API — the oil and gas industry’s lead organization — brought experts together to refine its best practice guidelines. “We feel we are the gold standard for this industry,” API’s Meadows said of the organization’s guidelines.

One standard calls for cement sheaths in place at least 100 feet below the deepest source of underground drinking water encountered in well drilling.

But when API sent its recommendations to the states, the responses were as varied as the state regulations themselves.

The group asked the states to review the recommendations and consider how their own regulatory programs could be enhanced, Meadows said. “Some states were right on top of this and were thrilled to have the information,” Meadows said.

“They called us immediately. Other states — perhaps they felt their programs were already sufficient. And other states are coming around as more development goes on,” she added.

“Not every single line [in the API practices] is going to apply to every operator in every instance,” said API’s Reid Porter. “It is more of a guidance. You have to put some faith in good engineering practices and well-trade engineers. That’s the burden we put on the operator.”

The absence of an accepted industry standard is matched by a void in federal regulation of shale gas well construction, following Congress’ action in 2005 to exempt hydraulic fracturing from Washington’s oversight.

The oil and gas industry has drawn a hard line against any federal regulation of shale gas development, pointing to the substantial variations in geology and water resources across the major shale plays. Because the geology is local, so must the regulations be, industry and state officials insist.

“I look at state oil and gas regulation as the epitome of change management,” said consulting engineer and industry veteran J. Daniel Arthur, of Tulsa-based ALL Consulting. “A lot of these states have dealt with well construction for a very long time. A lot of the time, we want to seek the one size that fits all. But there could be hundreds or a thousand different approaches, all of which could work.”

Geology underlies why states require different practices for protecting underground water resources, said Scott Kell of Ohio’s Department of Natural Resources, which expanded its drilling and fracking regulations this year as drilling in its Utica Shale play took off.

Properly cementing the well casing pipes is a complex operation involving centering of pipe strings; precise quality control of the cement slurries; close monitoring of pressures as the cement is put in place; and tests of the cement integrity, experts agree.

According to best practices, after an initial string of pipe is sunk below a targeted drinking water aquifer, drilling temporarily stops. Operators push cement slurry through the bottom of this “surface casing” pipe, up into the open space between the outside of the pipe string and the well hole. Ideally, that continues until the cement reaches the surface.

When that initial concrete barrier is securely in place and its integrity confirmed with tests, drilling resumes, and additional cement sleeves are usually required lower down to further secure the well.

Ohio’s Department of Natural Resources (DNR) labels its cementing regulations as among the most stringent in the country. The rules say drillers should pump cement down through the surface casing to a depth 50 feet below the lowest “underground source of drinking water” (USDW).

According to one scenario published on DNR’s website, the depth of a typical surface casing cement job may vary from around 200 feet in Pennsylvania and Wyoming to 400 feet in Michigan to more than 600 feet in Ohio and Oklahoma.

Additionally, Ohio is one of five states to base the depth of its surface casing cement according to the USDW standard, a water quality definition set in the federal Safe Drinking Water Act and based on the concentration of dissolved solids in the water.

The lowest aquifers that still qualify as drinking water under the federal standard are going to be highly salty, Kell said. “It’s not going to be very palatable water, but it’s considered to be water that may have future utility as treatment technologies improve and treatment costs decline. And so we look at it as protecting water that may have future utility,” Kell said.

Pennsylvania does not go that far. Currently, a key provision of its rules requires drillers to set cement sleeves at least 50 feet below the deepest source of “fresh groundwater” encountered when drilling a particular well, or in nearby wells. Unlike Ohio’s rules, Pennsylvania’s requirements don’t protect the deepest potential drinking water aquifer and do not use the federal drinking water quality standard.

Pennsylvania’s Department of Environmental Protection is working with outside experts to determine whether the state should map all underground water supplies as a basis for drilling regulation. The state reports making “significant progress” but has not set a completion date. Drilling continues under the current policy.

Ohio’s Kell said that such differences do not indicate that some states are cutting corners on their regulations but rather that Ohio has sought to go further than the crowd.

“So why wouldn’t every state do that? In some states there is an abundance of groundwater of currently usable quality that is readily available” and that affects the decision on protecting deep underground water, Kell said.

In some Western states, the deepest underground sources of drinking water are below the petroleum reservoirs, he said. “If those states were to require surface casing to the deepest USDW level, there would be no oil and gas production. This is an area of appropriate state flexibility,” Kell said.

The variation in state oversight is magnified by the prevalence of well-by-well standards, even in states like Ohio that have issued general regulatory standards.

Ohio, which has gone furthest in specifying some safe practices for shale gas drilling, gives state officials and inspectors discretion to substitute case-by-case requirements when required by specific geological conditions. Ohio’s 50-foot surface casing requirement may be changed in a particular well’s permit to respond to local conditions.

There is no map of USDW depths in southeastern Ohio from which to measure the 50-foot cementing standard, because the geology there is too fragmented and irregular, Kell said. This, too, becomes a judgment call for the state, he said.

Ohio’s “best practice” standard calls for visual evidence that cement has reached from the bottom of the initial pipe string to the surface. “We want to see a number of barrels of good-quality dense slurry coming out before we consider the job complete,” Kell said. But if the cement does not reach the surface, then the operators must test the well’s integrity “as approved by the inspector.”

“It has to be related to differences in geology,” Kell said. The state’s geologists have spent careers understanding aquifers and shale plays below ground, he said. “Where new things are encountered, or things that are encountered that require changes, most of the states and industry are pretty adept at modifying practices and procedures and learning,” he said.

“For every single well permit in Ohio, we design the well casing case by case,” Kell said. “We expect a very agile, flexible approach to compliance, and we have inspectors out there to ensure it’s done right.

“If they have not demonstrated protection of groundwater and USDW, they must plug the well,” Kell said. “You’re done.”

That has not happened so far in the drilling of Ohio’s Utica Shale play, he said.

In the past, DNR was able to witness 80 to 85 percent of the surface casing cement jobs, Kell said, and the agency wants to maintain that level of oversight. “That’s one of the things we will measure as the Utica play unfolds,” he said. It remains to be seen whether the pace of inspector hiring keeps up with the pace of drilling in the Utica Shale.

But the public must take such state assurances largely on trust, RFF says. “As a general rule, it’s very hard to find information from states about activities at regulated wells,” Richardson said. “That doesn’t mean the regulations aren’t strict or well-enforced. It’s just hard to know. States don’t seem to be making much of an effort to show what’s going on.”

“We asked every single state that has skin in this game to tell us why their regulations differ from the others,” said Alan Krupnick, director of RFF’s Center for Energy Economics and Policy. “And we got absolutely zero response to that question. Zero.”