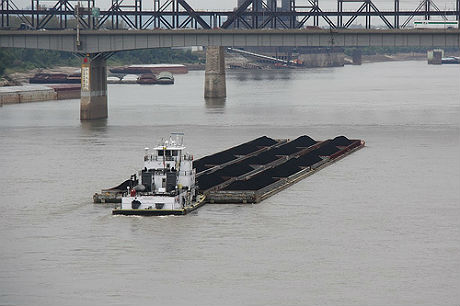 Coal barges on the Mississippi River in St. Louis. (Photo by Erin and Lance Willett via Creative Commons)

As coal-fired power plants are closing down across the U.S. – the result of competition from cheap natural gas and tougher pollution rules – coal companies are looking to ramp up their exports overseas. Coal exports from the U.S. have already increased significantly in the past few years.

The U.S. has long exported coal for power plants and steel-making (thermal and metallurgical, respectively) to Europe, South America, Asia and Africa. But now companies are looking to build new ports or expand existing ports in the Pacific Northwest and on the East and Gulf coasts.

Appalachian coal is currently shipped to Europe from East Coast ports, and if proposed ports in Oregon and Washington are built they will ship potentially massive amounts of coal from the Powder River Basin in Wyoming to China. China’s seemingly insatiable demand for coal is fueling the potential export boom. Though China has ample domestic coal, it is also a major importer.

Though it far from these coastal ports, the Illinois Basin also stands to be affected by the shifting forces of the coal market, including demand from power plants in the U.S. and abroad, the outcome of port-building proposals and other market factors.

Tom Power, a resource economist at the University of Montana, has been studying the global coal market including a project to be finished this fall involving the modeling of potential outcomes for domestic and global coal consumption and production areas. The Illinois Basin, which covers much of Illinois, Indiana and western Kentucky, is one of five U.S. production areas his team is modeling.

Midwest Energy News: Could the Illinois basin ever export coal to China? Could coal be sent down the Mississippi River to the Gulf Coast and then through the newly widened Panama Canal, or can it be sent by rail to the west coast for shipping from the proposed ports there?

Power: Illinois and Ohio certainly couldn’t ever compete against Powder River Basin coal [which is] cheaper to extract and much closer to the West Coast.

Powder River Basin coal has been going right through Illinois basin markets and snatching up what growth there used to be in the domestic American coal markets in the Midwest. So it seems unlikely if Illinois coal hasn’t been able to hang onto market share or increase its market share in competition domestically with Powder River Basin coal, it’s probably not going to beat them in export to Asia. The transportation distances are much longer, transportation costs are much higher, and the initial mining costs are also higher (in the Illinois basin).

The reason people are bringing Powder River Basin coal into Ohio (for power plants) is that they are using Great Lakes water transport – it’s unloaded in Superior (Wisconsin), put on barges to Cleveland, Detroit, Milwaukee. You can overcome some of the transportation cost disadvantages associated with being so far away from eastern cities by gaining access to the Great Lakes water transport system.

What about Illinois basin coal exported to Europe or other countries?

The US Energy Information Administration (EIA)’s modeling indicates Illinois basin coal is competitive against Appalachian coal. But with the modeling we’ve done recently, the preliminary results don’t indicate that at all. We have to figure out what’s different between our assumptions and the assumptions going into the Department of Energy model.

Right now the domestic market for coal is so soft and the projections (for domestic coal sales) are so negative that coal companies have no choice but to try to export the coal if they can make any money at all off of it – that’s what’s going on now. Our highest-cost source of coal – Appalachia —  is leading the exports because it’s in the least demand within the U.S. You already have the mine built, you already have the equipment in place – all you’re focused on is what it costs you to get the coal out of the ground. When you see your market start to evaporate domestically you ship it overseas. If you have to pay to expand the mine or pay to replace the equipment, you might as well just shut down the mine.

The key is if the West Coast ports don’t get built, then prices are going to remain higher in Asia for coal, and more Appalachian and Illinois basin American coal is going to be competitive. Appalachia is closer to Europe, but Illinois coal still has a relatively inexpensive way to cope with the fact it’s farther away from the Atlantic – in terms of the water transport it has on the Mississippi and the St. Lawrence Seaway.

So if the West Coast ports are built and all this Powder River Basin coal gets shipped to China, might that mean the coal plants in the Midwest that are currently burning Powder River Basin coal might start buying coal from the Illinois basin? With new pollution controls that they’re having to install now the plants can handle the higher sulfur Illinois coal…

It’s possible that could happen – we’re still in the midst of trying to figure out what our modeling is telling us…[If Powder River Basin coal is increasingly exported to China], the totally preliminary results are showing not a boost to Illinois basin coal but a revival of Appalachian coal, maybe the market in the eastern U.S. for Appalachian coal comes alive again instead of being in a state of terminal collapse. If you change the transportation costs a little it might be Illinois basin coal that is filling in (at U.S. power plants) for the Powder River Basin coal that’s getting exported.

There are also proposals for new liquefied natural gas (LNG) export facilities on the East, Gulf and Pacific Northwest coasts. If these are built, will that have any impact on the Midwest energy scene?

If you were able to export enough LNG to drive natural gas prices back up, then coal would start looking more attractive as a fuel for electricity generation in the U.S. But we don’t have the infrastructure to export that much gas at this point, though gas producers would love to do it.

How much of a factor in all of this are the fuel costs for moving the coal – for the locomotives, ships and barges?

It’s an important factor. When diesel prices were skyrocketing several years ago, railroads got permission to add a diesel fuel surcharge – like airlines. Transportation costs were rising fairly steeply in the U.S. But now railroads have so much excess capacity … there is an idea those transportation costs will come down now.

With international trade the more uncertain element is not the diesel fuel for tankers but how much surplus capacity there is. There are only so many of them (ships equipped to carry coal). There are huge economies of scale – the bigger the ship, the cost per ton shipping comes down dramatically. We’ve been in a period of excess supply of larger ships just because of the fallout from financial collapse and great recession, so shipping costs have remained low. But in the past it has been very volatile.

Once the economy around the world is bubbling away, people are trying to ship grain, steel, coal iron ore, you name it. Then they start bidding to get access to the big ships, and oceangoing shipping rates can skyrocket. If we slip into another recession as Europe seems to be indicating, or if the Asian economy slows down, I think we can be confident shipping rates are going to remain fairly low.

The whole energy security thing, there is an important reality there in the sense that we can be more energy self-sufficient and maybe there’s less need for us to be getting into dangerous situations around the world…But shipping natural gas — for instance, to Asia because you can get paid four to five times as much per million BTU as if you were selling it in the U.S. – that does nothing for our energy security, what it will do is drive natural gas prices up here. Natural gas companies would love that, but it will raise energy costs to all Americans.

The best thing from a mineral and energy security point of view would be to analyze carefully what we have, know what it is, how much is there, and then leave it there.