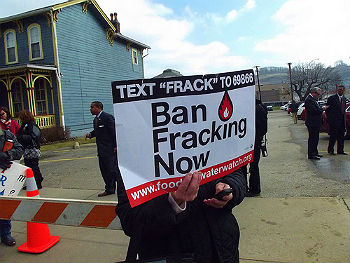 An anti-fracking protester in Ohio. (Photo by Bill Baker via Creative Commons)

Final part in a three-part series. Read parts one and two.

On a sunny day in September, filmmaker Josh Fox and Pennsylvania’s most ardent critics of natural gas drilling ducked into a small meeting room in the back of downtown Philadelphia’s Arch Street Methodist Church.

They unfurled a banner behind a podium. “Fracking poisons our air, our water and us,” it read. A photo of a little girl standing amid milk jugs of dirty water tugged at the word “poisons.”Near the front of the room, where frustration and outrage shared a stage, handheld video cameras flanked the anti-drilling activists as they cycled up to the microphone.

Some jabbed their fingers at the sprawling Pennsylvania Conference Center across the street. From behind the center’s glass facade, representatives from companies operating in the region’s Marcellus Shale gas formation spoke in awe of how rapidly they were able to turn Pennsylvania into one of the nation’s major energy producers.

“What they’re doing across the street,” Fox told the group as they prepared for a street demonstration, “is nothing short of ensuring we won’t have water in the future that we can depend on in the way we do now, and nothing short of a hostile takeover of the state.”

Fox’s 2010 documentary “Gasland” is credited with galvanizing small grass-roots organizations behind local efforts to ban shale gas drilling and hydraulic fracturing, or fracking. So far, 39 communities in New York have imposed bans and nearly 100 more have passed moratoriums on the industrial process of blasting massive amounts of water, sand and chemicals more than a mile underground to release deposits of natural gas trapped in shale rock.

In recent months, Fox and writer Bill McKibben, an advocate for aggressive measures to combat global warming, organized rallies in Washington, D.C., Pennsylvania and New York to boost their calls for sweeping drilling bans. Hundreds appeared on the streets and at staged forums, and organizers insisted a larger silent majority stood behind them.

Fox and McKibben are a two-man anti-fracking force. Together, they’ve become every bit a symbol of the movement to ban drilling in the Northeast as is the anti-fracking emblem that drives a red slash through “Frack.”

But antagonism toward drillers among local anti-fracking coalitions masks a more complicated story of how larger and more deep-pocketed national environmental groups are calibrating their positions on gas in the era of Josh Fox.

No data, no credibility

In interviews with EnergyWire, executives from the Sierra Club and the Environmental Defense Fund (EDF) and other environmental leaders described walking a tightrope. The organizations draw energy from Fox and the tough anti-fracking groups but are pushing for a seat at the table when gas producers and state regulators rewrite drilling regulations.

National environmental leaders are balancing the needs of red-meat donors, who press for a hard line against expanding fossil fuel use, with pragmatic policy inclinations that acknowledge the role of natural gas in driving down conventional air pollutants and greenhouse gas emissions.

“If you’re in the middle, you actually need people on both sides so you can figure out what the solution is,” said Eileen Claussen, president of the Arlington, Va.-based Center for Climate and Energy Solutions.

The middle has become an increasingly tough place to be for organizations that anti-frack campaigners call “Big Green.”

New York-based EDF has faced the bulk of criticism this year, battling a perception among grass-roots organizers that it wields outsized influence in state capitals and is too willing to sit across from polluting industries to craft regulations. Instead of embracing the concept of banning shale drilling and fracking, a process its critics say is inherently a threat to public health, they contend that EDF’s collaboration with gas companies on an ongoing methane emissions study is aimed at expanding drilling, not curbing it.

A spokeswoman for Shell said the company will provide access to its gas fields for a “fact-based, scientific look at air emissions from natural gas production.” EDF and the University of Texas would not name the other gas companies involved in the study, which is set to be completed by December 2013.

Methane, the major component of natural gas, is among the most potent greenhouse gases when it is released into the atmosphere. Yet researchers say there are limited data on how much fugitive methane escapes well sites, pipelines and processors, a hard fact that has ignited a debate about whether the shale gas boom and the economy’s turn toward gas undercut climate goals.

“If there’s a lack of data, then really nobody knows what they’re talking about,” said Mark Brownstein, chief counsel of EDF’s energy program and head of its natural gas team. “I would think that [through] understanding that, then industry would see the value in moving forward to actually get data.”

New York Mayor Michael Bloomberg in August announced a $6 million grant to EDF to boost its regulatory efforts in an op-ed article co-written by George Mitchell, the Texas oil baron who led the industry’s adoption of horizontal drilling and fracking. That has only fueled the antipathy of ban advocates, who equate Mitchell, Bloomberg and EDF as entities aligned to promote gas.

EDF President Fred Krupp has come under fire for his work as part of a shale gas advisory panel under Energy Secretary Steven Chu. In a report last winter, the panel urged more oversight of shale gas development to boost public confidence but stopped well short of endorsing policy measures to rein in fracking. With guidance from the federal government, said the panel, states can adequately regulate.

Fox and others dispute the finding of Krupp and others on the panel. “EDF is a rogue organization,” he told organizers in Philadelphia.

“There will always be large organizations that fight for a few crumbs,” added ban advocate Tracy Carluccio, deputy director of the Bristol, Pa.-based Delaware Riverkeeper Network.

When asked, Brownstein and others at EDF staunchly defend the organization’s decision to plunge into research alongside whatever companies they can get to come along. It will bring data to bear as U.S. EPA and states consider regulatory options, they said.

Further, they argued that U.S. producers today use hydraulic fracturing technology in nearly all of their onshore oil and gas drilling operations, elevating the political and economic consequences of building energy policies around bans and moratoriums.

“There’s every reason for the public to be skeptical about whether stronger regulation can be developed, implemented and enforced,” Brownstein said. “To the extent that people calling for an outright ban are giving voice to that skepticism, that is, in fact, helping to drive the regulatory changes that are necessary.”

Michael Brune, the Sierra Club’s 40-year-old executive director, strode into the club’s Washington office one afternoon last July. His son and daughter skipped past the wall photos of vistas and oceans and flopped onto the nearest couch. Except for the searing summer heat, they seemed at home as Brune neared the end of another trip to Washington that included back-to-back meetings during most days.

Brune took the helm at the San Francisco-based Sierra Club in January 2010. He replaced Carl Pope, who had led the group for 18 years, and who before departing had set the club’s sails against the prevailing winds when it came to natural gas. Between 2007 and 2010, the Sierra Club accepted more than $25 million in donations from gas giant Chesapeake Energy Corp. as part of the environmental group’s anti-coal campaign. Pope had been a major public booster of gas as a tool to replace coal.

There had not been an open internal debate among the Sierra Club’s leaders or members about taking money from Chesapeake, Brune said.

“Coming in, I knew I didn’t want to be the executive director of an organization that received such a substantial portion of our funds from a major polluter,” Brune said in an interview. “I also knew that we had to be independent of companies and industries that were in drastic need of reform.”

“We’re going to be using gas for a couple decades into the future, at least,” Brune said. “The challenge is to use as little as you can. Don’t invest in new infrastructure that will become sunken assets further down the road. And make sure you’re producing it responsibly. We don’t want to replace one toxic problem with another.”

The technology-driven shale gas boom centered in Texas and Louisiana picked up steam just as the U.S. economy hit the skids in 2008. The aggressive landmen behind Chesapeake’s rapid buildup of shale acreage found their way to Pennsylvania, where large-scale drilling soon began. Ohio is testing wells, and drilling in parts of New York could be on the horizon.

Meanwhile, influential energy analysts such as Citigroup’s Edward Morse this year pressed the rhetorical accelerator. “With no signs of this growth trend ending over the next decade, the growing continental surplus of hydrocarbons points to North America effectively becoming the new Middle East by the next decade,” Morse wrote in a March report that has been rolled into election-year talking points on energy independence.

The surplus of natural gas selling at low prices has also cut U.S. greenhouse gas emissions during the past three years, according to the Energy Information Administration, as coal plant operators switched to gas.

But concern about methane migration into water sources and leakage into the atmosphere, chemical disclosure, wastewater and unfettered drilling scrambled the good news about gas. Starting in 2010, gas turned into the environmental movement’s worst nightmare.

The Sierra Club and the Natural Resources Defense Council (NRDC) had for years either been agnostic toward natural gas or actively supported gas as a cleaner alternative to coal-fired generation. The Sierra Club and NRDC today lend their names to rallies advocating bans and legal challenges designed to restrict gas production.

As the Sierra Club extends its “Beyond Coal” campaign tactics into “Beyond Natural Gas,” Brune described part of the challenge large, donor-based environmental groups face: how to walk the line that separates unyielding environmental opposition from a corporate partnership and regulatory approach.

During his seven-year stint as the head of Rainforest Action Network, Brune distinguished himself by cutting a deal with Home Depot to stop buying wood from old-growth forests.

“If I make a public announcement on Facebook that I’m going to meet with eight executives from the gas industry, people want to know why,” Brune explained. “If we’re going to work with industry, there needs to be a higher level of transparency so that it’s very clear that I’ll be upholding and strengthening the values of the Sierra Club rather than watering them down.”

In recent months, the Sierra Club has planted a flag as an active opponent of exporting natural gas. Last month, it pressed for Bureau of Land Management standards for hydraulic fracturing on public lands, including urging it to “establish areas that should be completely off limits to oil and gas drilling.”

“We are all united around the concept that there needs to be stronger regulations for methane emissions, air and water,” Brune said. “Where there is disagreement is that there are some local groups, particularly local groups, that don’t want any fracking, anywhere, anytime, under any circumstances. Others don’t feel that.”