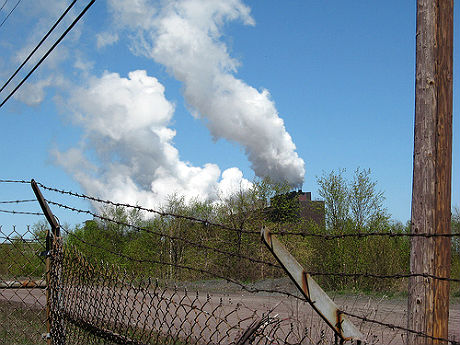 A taconite plant in Silver Bay, Minnesota. (Photo by anthonylibrarian via Creative Commons)

Cravaack’s H.R. 6507 would compel the agency to approve Minnesota Pollution Control Agency plans for dealing with regional haze. The agency would also temporarily be prohibited from pre-empting state standards.

The legislation focuses on processing facilities for taconite, a certain type of iron deposit that helps fuel the economy in Cravaack’s northeastern Minnesota district. In August, EPA proposed rules targeting emissions from those facilities.

The agency said best available retrofit technology, or BART, “is a requirement of EPA’s regional haze rule which has not been satisfied by Minnesota or Michigan for its subject taconite plants.”

In other words, the plans don’t do enough to pressure taconite processors into reducing their impact on visibility.

“The Environmental Protection Agency determined that because one taconite facility was able to make use of low [nitrogen oxide] burners to reduce emissions,” the bill says, “that low NOx burners should be considered BART for all taconite facilities, and that many facilities should add this technology within 18 months.”

The debate is a familiar one, with environmental advocates calling for strict guidelines while critics accuse EPA of trying to implement an unworkable, one-size-fits-all approach.

Cravaack in a statement said, “This federal regulation ignores years of research by the MPCA and neglects to account for the years it can take to plan, test and perfect modifications to these highly specialized taconite furnaces.”

Cravaack, who unseated long-term Democratic Rep. Jim Oberstar during the 2010 midterm elections, has worked on developing a pro-mining brand.

Last month, the House passed his H.R. 5544, a land-swap deal between the state and the federal government, which critics said could benefit mining interests (E&E Daily, Sept. 13).

Mining has also become a top issue in Cravaack’s race with former Democratic Rep. Rick Nolan, who served between 1975 and 1981 and is looking to make a Capitol Hill comeback. Both candidates are boosting taconite operations along with a flurry of other exploration and development projects around the Great Lakes.

Mining interests have generally sided with the GOP incumbent. Since last year, Cravaack has received at least $4,000 from the National Mining Association, another $4,000 from United States Steel Corp., and at least $2,000 from steel and mining giant ArcelorMittal SA. Both companies have operations in Minnesota.

A recent ad by political action committee American Action Network said of Cravaack’s opponent: “Northern Minnesota needs jobs, but the EPA has stood in their way. And Rick Nolan is on their side.”

For his part, Nolan has accused Cravaack of being a tea party extremist. The Democrat, who says he supports mining jobs, also got a recent boost from an endorsement by the United Steelworkers union.

“We need to change the way we do our politics,” Nolan said in one of his campaign ads. “Money is corroding the system, and the middle class is getting crushed.”

The race is one of the country’s top magnets for outside and party spending. The Rothenberg Political Report ranks the race among the most competitive.