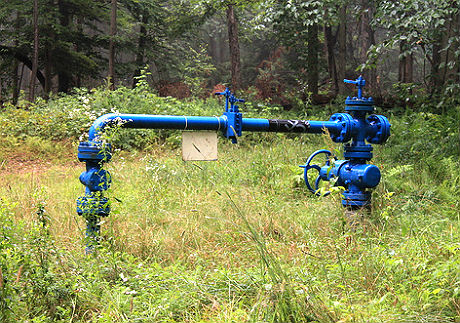 By Gayathri Vaidyanathan and Saqib Rahim

A team of academics, natural gas companies and environmentalists is hoping to pull a crucial environmental issue from the jaws of polarization and controversy — and start moving it into the realm of accepted reality.

Information wars have flared up around the question of how much methane leaks during hydraulic fracturing. Industry has protested against estimates by federal agencies, leading to a swirl of reports from industry and academia that tell contradictory stories about the problem.

According to the reports, methane either leaks in such high volumes that it demolishes the environmental value of natural gas or is generally controlled by industry and poses no large threat.

Last week, the University of Texas, Austin, the Environmental Defense Fund and nine major natural gas companies announced a new research effort to get to the bottom of the issue. Starting in January, the group will publish raw data, collected at their drilling sites, and offer them for peer review.

“A lot of the studies that have been done are based on assumptions. What we’re trying to do is get past the assumptions and the ‘he said, she said’ that comes with that, and having the measurements speak for themselves,” said Drew Nelson, a clean energy project manager at EDF.

The drive to let the collected information speak for itself is necessary because of controversy inherent in all things fracking. There are data, and then there is the way the data are interpreted — and so far, neither has survived scrutiny by the major players.

U.S. EPA’s inventory has been struck down by industry groups as based on too small a sample size. Industry’s self-reported measurements have been called out by environmental groups for bias. Academics have had their credibility and funding sources challenged. And a study by the National Oceanic and Atmospheric Administration, which may be the best-regarded so far, has been challenged for its assumptions.

Depending on whom you ask, methane leakage can range from less than 1 percent to as much as 8 percent of the natural gas produced each year.

To bring some consensus to the area, the research consortium will perform direct measurements at sites, as opposed to the extrapolations and data-dicing that have characterized the studies so far.

The group will also look across the life cycle of natural gas. The first chapter, which the group wants to publish in January, will focus on methane leaks from drilling, preparing, then producing from the well. Future chapters will have data on the gathering and processing of gas; transmission and storage; the local distribution to homes and businesses; and natural-gas vehicles and their fueling stations.

Transparency about the data will be a critical factor, given the controversy that surrounds the issue. Nelson said the goal is to be as transparent as possible, but the researchers and companies are still debating exactly what form that should take.

“There are a wide range of constituencies that want to see those data gaps filled, including NGOs, including the companies themselves,” said David Allen, the principal investigator of the study and director of the Center for Energy and Environmental Resources at UT Austin’s Cockrell School of Engineering. “Our goal here in performing the study is having information that’s accepted by all parties as being sound information.”

Using the sparse data available from industry so far, EPA has estimated that 2.8 percent of gas produced from a well each year leaks. But industry and Devon Energy Corp., in particular, have strongly criticized EPA for relying on a small, outdated sample riddled with data gaps.

Their criticisms of a study out of Cornell University, which found leakage of 2.2 to 3.9 percent of produced gas per well, have been even more vehement.

So far, NOAA’s study is considered the most authoritative because scientists based it on actual measurements of leakage at Colorado gas fields in 2008. That study found that about 4 percent of the 202 billion cubic feet of gas produced that year may have leaked in the Denver-Julesburg Basin.

But NOAA’s assumptions have been challenged, most prominently by Michael Levi, director of the Program on Energy Security and Climate Change at the Council on Foreign Relations (Greenwire, Feb. 16). Reworking the raw data of the NOAA study without the same assumptions, Levi has found leakage of 1.3 to 2.3 percent.

Still, Levi stressed that neither his nor NOAA’s numbers should be overinterpreted, given that the measurements were taken at one place, at one time.

The EDF-University of Texas-industry study is also distinctive for its scope. Allen, of the University of Texas, said it will include areas that few people outside of industry have measured, such as the casing and cementing that “complete” a well (EnergyWire, Oct. 1).

University researchers, not EDF or the companies, will take the measurements at the oil and gas sites in different parts of the United States. The companies have provided a list of available sites, but the researchers can choose which ones they visit and when to reduce bias as much as possible in their measurements, Allen said.

‘Good data tends to end up not pleasing everyone’

But to some veterans of the embattled topic of natural gas, clean data isn’t the only issue. It is how people scrutinize that data — and whether the data can take the heat.

John Hanger, a former secretary of Pennsylvania’s Department of Environmental Protection, is forming his own collaboration between industry players such as Royal Dutch Shell PLC and environmental groups like EDF. He feels that people at extreme poles of the environmental community or industry may choose to attack data collected through collaboration.

“The good data tends to end up not pleasing everyone,” he said. “Sometimes, it doesn’t please anyone because the data may contain within it points that don’t confirm advocacy positions taken by industry or by environmental groups. So that is another reason why the data needs to be rigorous.”

Executives with Devon Energy said they will be watching for that rigor. The company has criticized EPA’s methane figures as being off by large multiples, and it has held more than one meeting with the agency to discuss them.

Asked about the new research effort by EDF and others, Darren Smith, manager of Devon’s environmental, health, and safety department, said he expects it to have a “more dependable” methodology than EPA’s. He said Devon was not asked to participate in the study. But he thinks the group will find a much lower level of methane leakage than EPA has, keeping in line with Devon and others in industry.

Still, he said EPA may reject the study. “Frankly, the EPA has been reluctant to accept any of the data that industry’s been providing them to improve their estimates,” he said.

Smith said it remains an open issue because eventually there will be further discussions on climate. “It will be important for us, as an upstream industry, to defend ourselves against claims that we are a significant emitter of greenhouse gases,” he said.