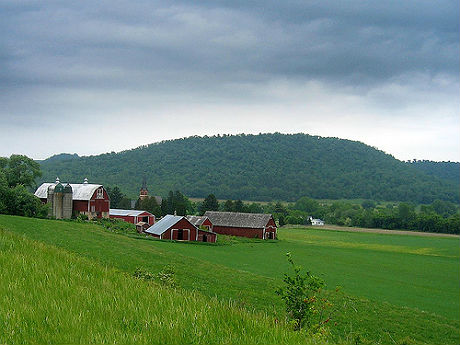 A dairy farm near Coon Valley, Wisconsin. (Photo by dusted via Creative Commons)

As a new report touts Wisconsin’s potential as a bioenergy leader, the state’s agricultural industry so far is slow to take advantage of a revamped incentive program that prioritizes the technology over wind and solar power.

As of July, Wisconsin’s Public Service Commission’s utility-funded Focus on Energy program began limiting renewable incentives to $10 million annually through 2014, and allocating 75 percent of incentives to biogas, biomass and geothermal projects. The remaining 25 percent is up for grabs by other renewable energy projects.

The decision reversed the previous focus on wind and solar, which absorbed 86 percent of Focus’ incentives in 2011.

Despite the changes in funding requirements, $8 million has already been spoken for or was paid out earlier this year under the former program, leaving about $2 million for projects under the new guidelines, said Catalina Lamadrid, director of marketing and communications for Focus on Energy. Next year will be the first year in which the full $10 million incentives will be distributed under the new regime.

“Preference will be given to projects that can be completed this year,” she said, adding that it is unknown which projects will go forward and their schedules.

None of this year’s $1.5 million set aside for a commercial bio-energy project or projects has been paid out, she said.

Focus on Energy is currently waiting for bidders to respond to their incentive offers, she said. The remaining money has been reserved for residential efficiency uses and use for solar electric photovoltaic, solar hot water, and geothermal renewable energy systems. Only $110,000 has been awarded to specific residential projects and $19,780 has been paid out.

“It has been moving a little bit slower than we anticipated,” she said of the current pace of awarding residential incentives.

Lamadrid said that Focus on Energy’s new incentive program requires that residential projects be completed within ten weeks of the incentive being reserved, which requires more planning on the part of the homeowner before they can apply for the incentive.

A report [PDF] by the University of Wisconsin’s Wisconsin Bioenergy initiative says the state has potential to become a global leader in bioenergy. Wisconsin’s dairy farms produce 4.77 million dry tons of manure biomass annually, with the potential to match the output of a large-scale coal plant, according to the report, called the Wisconsin Strategic Bioenergy Feedstock Assessment.

“We’ll continue to see growth in the biogas sector. And with favorable policy, I think we could see a really big leap but that’s up to the policy makers,” said Gary Radloff, director of Midwest Energy Policy for WBI, adding that Focus on Energy’s funding shift has potential. “It will be interesting to see how that plays out. They cut the overall dollar amount which is not a good thing, but now that they are going to place a focus on biogas and biomass, I think projects will start lining up.”

About 30 farms already produce bioenergy on some scale, but as many 200 to 250 have the potential, he said. The report also suggests that Wisconsin would be an early candidate for an integrated biorefinery which would produce multiple bio-fuels, bio-chemicals and other bio-products. Wisconsin also produces more than 5 million tons of corn stover and woody mass, which can be used for thermal energy and biofuels.

Even with the shift in incentives and the added money that will come online next year, large-scale biogas projects can take 18 to 24 months to plan and finance and six months for construction, far more time that wind power projects require, said Michael Vickerman, program and policy director for RENEW Wisconsin, whose members include biogas and solar companies (RENEW Wisconsin is a member of RE-AMP, which also publishes Midwest Energy News).

“To take a low grade energy source like manure and convert it into a usable fuel involves sophisticated engineering and adherence to tightly-drawn specifications and the whole thing takes a minimum of six months for construction,” he said.