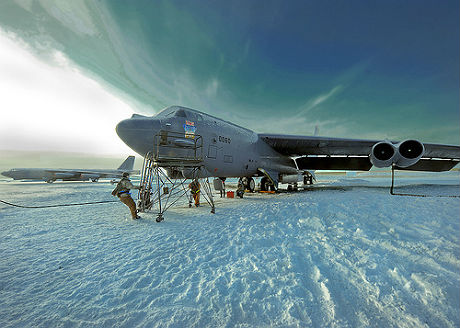 Despite a forbidding climate, Minot Air Force Base in North Dakota has some of the lowest energy costs in the military. (Photo via USAF)

Oil and gas aren’t the only strategic resources buried beneath North Dakota.

Part of the country’s intercontinental ballistic missile supply is stored under constant watch in 15 remote, underground facilities scattered across the state. Until recently, the Air Force had to truck diesel heating fuel to each one of them throughout winter.

Today, those missile facilities are warmed instead with a renewable heat source: the ground.

The missile sites are among a few dozen buildings in North Dakota where the Air Force has installed ground source heat pumps, equipment that takes the constant, relatively warm temperatures found underground and circulates it through buildings.

It’s part of a wide-ranging energy initiative led by Lawrence Johnson, who has become one of the Air Force’s efficiency gurus in the region.

Johnson was recognized earlier this month with a Federal Energy and Water Management Exceptional Service Award from the U.S. Department of Energy.

The former commercial pilot took a mechanical engineering job at the Minot Air Force Base in 2003 with few aspirations beyond bringing home a government paycheck.

It didn’t take long for that to change.

“I started looking around and seeing stuff that other people weren’t,” says Johnson.

In particular, he was bothered with the inefficiency of the base’s central heating plant. He ran some numbers for a heat pump system at the base’s community center, then ran those numbers up the chain of command and got a green light.

The heat pumps can be reversed in the summer, turning the systems into cooling systems by drawing heat out of the air and depositing it into the ground.

“We can almost cool for nothing,” Johnson says.

The project at the community center, which had never had air conditioning before, was a success, and that led to more heat pump installations on and off the base, including the remote missile facilities. Other buildings were equipped with new, high-efficiency boilers, and the old, inefficient central heating plant was demolished in 2009.

The new heating sources were combined with scores of other investments, from better insulation to energy recovery on all ventilated air — using exhaust to transfer heat to or from air that’s entering a building.

“I don’t don’t let a cubic foot of air go out of the building without doing energy recovery,” says Johnson.

The result: Minot, despite being in a climate where temperatures can swing from 105°F in summer to -30°F in winter, has some of the lowest building energy costs in all the military. Johnson says the base averages less than $800 per thousand square feet in annual energy costs, while a typical base runs around $1,500 and as high as $2,400.

But Minot hasn’t been alone. A recent Pew Environment Group report outlined how concerns about energy security have led the military to significantly invest in advanced biofuels, alternative-fuel vehicles and more efficient buildings.

“The [Department of Defense] over the past few years has really done a lot in energy innovation,” says Miller, “and Minot Air Force Base has really provided some fantastic examples of that.”

The projects have already saved the Minot base millions in energy costs, but Johnson isn’t done yet. Last year he was promoted to resource and efficiency manager for 5th Civil Engineer Squadron in Minot. “I’ve found a lot of energy hogs,” he says.

The next big project on his list is dealing with five airplane hangers that collectively consume 10 percent of the base’s energy. They’re old, poorly insulated, and have leaky tail doors where the back of the planes jut out of the buildings. He’s looking into using an inflatable tube to seal the tail doors more tightly.