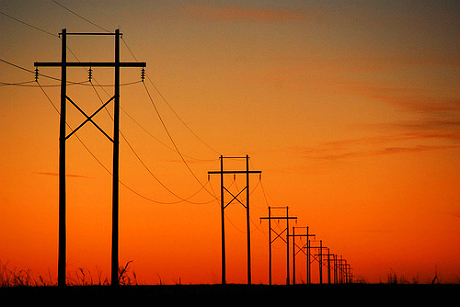 (Photo by Wavy1 via Creative Commons)

There’s been much buzz about the potential of “smart grid” projects wherein people’s homes and businesses are outfitted with meters that let them know the price of or demand for electricity at any given time of day.

But some energy experts say a disproportionate amount of attention and resources have been given to such “advanced metering initiatives” (AMI) and argue that the term “smart grid” is a misnomer for such systems.

That’s because to reduce energy demand and improve efficiency, advanced meters still depend on consumer behavior and decisions.

These experts say that a more viable way to improve the grid’s efficiency, reduce energy demand and facilitate renewable energy is to actually make the grid itself smarter, by investing in grid-based technology including sensors, routers, switches and storage systems that allow the grid to automatically adjust or redirect electricity flows in real time and to keep voltage levels stable, without human intervention.

That way the grid becomes “self-healing” and able to “make decisions” — for example to send electricity down alternate routes when a transmission line is downed in a storm or to reduce other flows when someone’s rooftop solar panels suddenly send a burst of energy onto the grid. Such smart grids are more conducive to distributed small wind and solar generation, since they can better handle two-way flows of electricity and make overall adjustments to take advantage of electricity flowing from rooftop solar panels or small wind turbines.

“Meters have a role to play: customer choice, knowing when to turn the power on and off, people can change their habits and choose to use power not at peak times,” said Mike Edmonds, vice president of strategic solutions for the S&C Electric Company which sells products and services related to grid automation. “But I don’t think of (advanced metering initiatives) as smart grids. That has nothing to do with the grid.”

While automation technologies are relatively common on the high voltage lines that move electricity long distances, the “distribution grids” of lines 69 kV or less that deliver electricity to individual homes and businesses are typically not smart.

“If the last 20 miles is dumb, you have a dumb grid, no matter how smart the rest of the grid is,” Edmonds said.

Grid-based, automated smart grid technology is already widely available and is the norm in many countries in Asia and Europe. A number of U.S. utilities have invested significantly in such technologies, but the U.S. lags behind other countries in part because of the patchwork of regulatory commissions, state laws and different types of utilities which shape decisions about the grid.

Smart meter programs across the U.S. have gotten significant public attention and support from residents, elected officials, utility executives and others over the past few years, and various programs have received government support including under the 2009 American Reinvestment and Recovery Act (ARRA)’s $3.4 billion Smart Grid Investment Grant program.

A July 2012 U.S. Department of Energy progress report [PDF] on the ARRA grants showed that almost three times as much money has been awarded to advanced meter programs and the related customer feedback systems as has been spent on electric distribution and transmission projects.

“As it turns out, many consumers care most of all about reliability.”

AMI programs have also encountered opposition from small but vocal groups who think the meters compromise their privacy or independence or even harm their health with radiation. On Oct. 4, rallies were held in 35 cities – most of them sparsely attended – in a “National Action Day to Stop Smart Meters,” timed to coincide with the international GridWeek conference hosted by government agencies and trade groups.

Likely more important than opposition based on questionable assertions, smart meter programs have often turned out to be more costly and difficult to implement than originally expected. For example, Chicago’s program is in jeopardy because of funding gaps and battles with state regulators over rate-setting.

And depending on the situation, the potential cost savings facilitated by smart meters may not be large enough to motivate most residents to take significant action.

“If I told my wife I could save $2 a month by putting the dishwasher on in the middle of the night it would be a very short conversation,” Edmonds said. “The challenge with relying on the consumer is the consumers have to be actively engaged in changing their habits. All that customer engagement is hard when the customer doesn’t really care that much.”

Grid-based technology, by contrast, can’t reduce the amount of electricity people decide to use at a given time of day. It can’t stop someone from charging their electric vehicle or doing loads of laundry on a sweltering afternoon, when energy demand skyrockets, expensive peaker plants fire up and transmission lines risk overloading.

But grid-based technology can automatically make minute adjustments to make sure electricity is moved around the grid as efficiently as possible, with flows carefully calibrated to lose less electricity in transit, to take advantage of distributed generation and to quickly reroute electricity when certain lines are damaged or disrupted.

Berst said there is a role for both meters and grid-based technology, but the latter deserves more attention.

“Distribution automation and substation automation are more important and more direct ways to make the grid more reliable and more resilient,” he said. “That said, many utilities are discovering that [smart meter] data can be very useful for grid reliability and grid efficiency. Done right, the two sides work very nicely together.”

In a 2010 piece that asked “Are we building the grid @$$ backwards,” Berst pointed out obstacles to smart meter success including the need for additional equipment and regulatory and pricing overhauls. He wrote:

“It’s not enough to install a smart meter. Quite often, you also need a programmable thermostat (that talks to the meter) and a home energy monitor…Demand response programs don’t operate unless you have some kind of dynamic pricing or incentive to induce customers to play along. Getting new rate structures can take years, especially in jurisdictions where advocacy groups have taken an adversarial stance.”

Edmonds compared the benefits of smart meters and a smart grid in the case of a storm. Smart meters would immediately let utility officials know when and where service has been disrupted, he noted, a great improvement over the old “detective work” method of waiting for customers to report outages. But ultimately, he said, a truck would still need to be dispatched for repairs, which could still take hours or days.

In contrast, a smart grid would not only detect the interruption but reroute electricity flows potentially within seconds to get electricity back to consumers. (This of course depends on a robust network of transmission lines, and even with the smartest grid technology there would surely be many rural locations where no alternate route would be available.)

Smart distribution grids ideally combined with proactive net metering policies or other incentives can also encourage owners of individual homes and businesses to install micro-wind or solar power, since they will more cost-effectively be able to send electricity back to the grid. And storage capacity on the grid is conducive to wind power, since electricity generated at night when winds are high but demand is low can be stored for a limited amount of time.

“Grid automation and modernization are necessary if we want renewables and distributed generation at scale,” said Berst. “The current grid can accommodate small amounts of either one. But at scale – when we have hundreds of thousands or millions of solar rooftops, for example – the grid will have to be highly intelligent to accommodate all that variability and to keep supply and demand balanced millisecond by millisecond.”

Edmonds said that publicly-owned utilities can typically more easily adopt smart grid technology than investor-owned utilities that are obligated to their stockholders. He said grid technology producers don’t want government subsidies, incentives or tax breaks, but they hope policy changes and awareness-raising will increase demand for their products.

Berst said grid modernization depends on furthering the trend of decoupling utility profits from the amount of energy they sell.

“Many modernization efforts make the grid more efficient, as a result, the utility sells fewer electrons,” Berst said. “In many states, that means that they earn less money. We cannot expect utilities to spend more on modernization so they can make less in revenues. We need to stop regulating for the past we came from, and start regulating for the future we want.”

A 2004 study by Lawrence Berkeley National Laboratory found that power outages cost the U.S. about $79 billion annually, about 57 percent of that in the commercial sector, 20 percent in the industrial sector and 2 percent residential. Two-thirds of the financial loss was attributed to momentary, rather than sustained, outages.

“In the U.S. you can be without power for five minutes before it’s even counted as an outage,” Edmonds said. “In the UK, Ireland, and Portugal it’s three minutes. In Venezuela, a communist country, you have a three-minute threshold. That’s really important because reliable power attracts business. Chattanooga has new jobs because they have a reliable grid. Why would you locate a company where power always goes out all the time?”