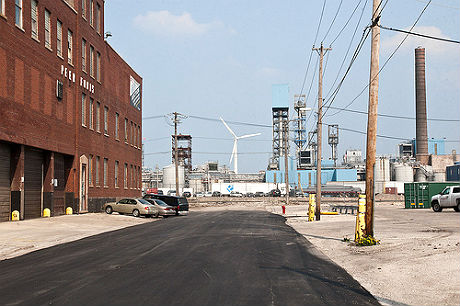 A wind turbine on Chicago's South Side. (Photo by Plant Chicago via Creative Commons)

CHICAGO – As Chicago moves closer to a decision on whether to adopt municipal aggregation for electricity, advocates are hoping the city’s purchasing power can be used to advance renewable energy.

Mayor Rahm Emanuel recently reiterated his support for the proposal, and the city launched an informational website and on Tuesday held the first of four community meetings to inform residents about the issue.

Backers are emphasizing cost savings as the top priority and the main motivation for municipal aggregation, in which the city would decide from which utility companies to purchase electricity for almost one million residents.

However, at Tuesday’s meeting, attendees underscored that popular support for municipal aggregation continues to be driven largely by the desire to invest in more renewable energy, even though it is so far unclear whether or to what extent aggregation would spark renewable energy development in Illinois.

As previously reported in Midwest Energy News, municipal aggregation is unlikely to drive new renewable energy generation in Illinois and could even be detrimental to in-state renewable energy investment unless a legislative fix is made to the state’s Renewable Portfolio Standard (RPS). Clean energy advocates are hopeful that will happen next year.

Mark Pruitt, the energy expert contracted to host the meetings and advise the city on the issue, said that if aggregation offers enough savings compared to ComEd’s rates, the city could reinvest some of those savings in renewable energy development. For example, the city could invest in solar energy, then sell the resulting Renewable Energy Credits (RECs) for a profit and invest that in even more renewable energy development. This scenario could happen without an RPS fix; and Pruitt did not mention the RPS issue at the meeting.

Clean energy advocates in attendance described the idea of investing savings in renewable energy as an exciting win-win situation. However it remains to be seen whether it is possible, since the city won’t know until bids are submitted and reviewed how much savings compared to ComEd rates they can realize.

Currently, ComEd’s rates are higher than market prices because of long-term contracts the utility signed when electricity prices were higher. But key ComEd contracts expire in June 2013, meaning comparative savings under municipal aggregation will likely diminish significantly at that point.

Pruitt explained that it is unlikely the city would buy enough wind and solar power to spark new construction, since such projects usually need long-term power purchase agreements that would be unlikely given the city’s commitment to beat ComEd’s rates. But clean power advocates are still hopeful that aggregation will lay the groundwork for more renewable energy in the future.

While it is still unclear how much cost savings and renewable energy investment would be possible under municipal aggregation in Chicago, Pruitt described the deal as entailing virtually no risk and no work for consumers – leaving the impression that there would be little reason not to give it a try.

What the change will mean for consumers

Under municipal aggregation, ComEd will still deliver electricity to customers who will still get their bills from ComEd. The only difference, Pruitt explained, is that the city government rather than the Illinois Power Agency will decide from which generators electricity is purchased.

Currently, 88 percent of Chicago electric customers receive electricity from ComEd, and the Illinois Power Agency has decided where the utility will buy that electricity. Twelve percent of residential and small commercial customers get their electricity through alternative retail electric suppliers, independent companies known as ARES who buy power from generators.

The great majority of Chicagoans likely have never heard of the Illinois Power Agency, created in 2007 in the wake of deregulation to make sure ratepayers got a fair deal. Pruitt was formerly the IPA’s executive director and sole employee.

Pruitt told the community meeting audience of about 30 people – most involved with clean power groups – that under municipal aggregation the city will take on a role similar to that of an individual deciding from which ARES it wants to buy power. That means the city will decide how to get the best deal for customers, either with one supplier or several.

“You need to have as many bidders as possible to get the best price,” said Pruitt. “If only a few suppliers can supply the whole city’s load, you might not hit very many bidders. If you were to split the city out into smaller pieces you might get more bidders – who could supply, say, 25 percent of city’s load each – and then you might get a better price.”

Tuesday’s meeting was held in the Pilsen neighborhood within several miles of both of the city’s recently-closed coal-fired power plants. Pruitt mentioned that the city could decide to de-emphasize or even ban coal-fired electricity under an aggregation plan, presumably only given that no cost savings are sacrificed.

“If there’s a deal with no coal, we could really applaud that,” said Brian Urbaszewski, director of environmental health programs for the Respiratory Health Association of Metropolitan Chicago. “Chicago is big enough we could really affect some generation sources upstream, so that we’re reducing the pollution that’s blowing into communities. But we won’t know what we’ll get and what’s possible until the bids come in. No one knows what it will cost, and until you know what it will cost you don’t know what you will be able to do.”

One attendee asked if the city planned to eschew nuclear power. City law department senior counsel Ron Jolly answered that would be impossible given that Illinois gets about 48 percent of its power from nuclear reactors.

“If you’re not going to purchase from coal, it’s pretty hard to make up all that generation” without relying on nuclear, Jolly said. “In terms of air emissions nuclear is far cleaner than coal.”

Municipal aggregation in Chicago was made possible by a 2010 state law, spurred in part by the fact that very few residential customers were taking advantage of their ability to buy competitively-priced electricity from an ARES. As of December 2009, only 185 of ComEd’s 3.45 million statewide residential customers were “exercising their right to purchase” power from an ARES, according to the city’s draft aggregation operation and governance plan released at the meeting.

One woman at the meeting said that the deal sounded good but Chicagoans are skeptical of government promises especially since former mayor Richard M. Daley leased the city’s parking meters in what turned out to be a disastrous deal.

“The city of Chicago doesn’t necessarily have the greatest track record with hands in piggy banks,” she said. “How do I know there will be a level of transparency to make sure there aren’t inside deals happening?”

Pruitt responded that unlike bids for construction or other projects which can include widely varying scopes, promises and timetables, electric suppliers will all be bidding on the same very clearly defined assignment – providing electricity. He noted that all bid proceedings will also be public documents subject to the Freedom of Information Act.

Meeting attendee Hugh Telphia is an independent marketer whose clients include electricity companies that could potentially bid in the city process. He thinks consumers will get a better deal negotiated by the city than they would likely get from ARES on their own.

“This could create competition, which is better for customers,” he said. “There are some companies out there scamming people with higher rates than they should charge, so it’s good to have the city involved.”