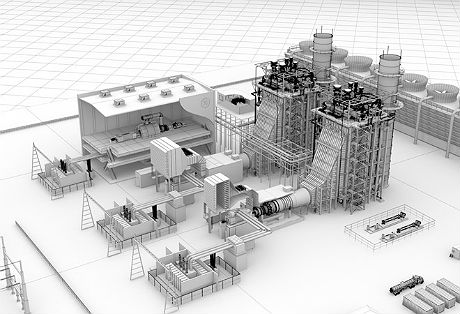 CHICAGO — As coal-fired power plants are closing around the country, more natural gas plants are expected to be built to fill the gap, in some cases on the sites of old coal plants.

GE is hoping the trend sparks demand for their new combined cycle natural gas power plants, which they say are the world leader in fuel efficiency and can ramp up more quickly and idle at a lower generation rate than other systems, meaning they are well-suited to backing up increasing amounts of renewable energy on the grid.

GE sold six of their new “FlexEfficiency 60” combined cycle plants to Japan, and they are hoping to drum up orders in the U.S., through a 25-stop cross-country road trip in an 18-wheel tractor trailer outfitted with models and electronic displays about the plants.

Like other combined cycle plants, GE’s new models generate electricity through turbines powered by burning natural gas, then the waste heat is collected and used to create steam which turns another turbine to generate more electricity. The standard model is known as a “2 on 1,” meaning it has two gas turbines and one steam turbine capable of generating up to 750 MW, but it can also be constructed as a “1 on 1” or “3 on 1.”

By comparison, coal plants in the United States on average have efficiency rates of less than 35 percent.

Two of those plants, in Colorado and in the Rockies, will replace coal plants that have been closed down. Like many experts Donohue thinks natural gas prices will rise again before long, and the more expensive but more efficient 7F 7-series plant will be poised for growing sales.

With increasing concern about the health and climate change impacts of coal-fired power plants, many residents and community groups have demanded that coal plants be “converted” to cleaner-burning natural gas instead. However, literally converting a plant to burn gas instead of coal is extremely expensive and highly unusual.

Sometimes it makes sense to build natural gas plants on the sites of former coal plants, as new combined cycle gas plants can tap into existing transmission infrastructure and sometimes reuse the steam turbine from a coal plant. Sourcewatch features a list of coal plants undergoing “conversion” to natural gas or biomass.

Donohue said that in most cases, natural gas plants are built on “greenfields,” because they are very large and not appropriate to locate in or very near cities, where many of the closing older coal plants are. He said coal plants’ steam turbines are also often deteriorating and not compatible with combined cycle gas systems.

Donohue said that at a site under construction in Turkey, one of GE’s 500 MW combined cycle natural gas systems is being co-located with about 20 MW of wind and 25 MW of concentrating solar. Given current market conditions he doesn’t expect similar projects in the U.S. in the near future, but if gas gets more expensive and incentives for renewable generation increase, it is a possibility.

Working with renewables on the grid

GE is touting the fact that their new combined cycle plants work well on a grid with increasing amounts of renewable energy, since renewables vary greatly in the amount of power provided at a given time. GE’s 7F 7-series plant can ramp up at the rate of 100 MW per minute, compared to 80 for the 7F 5-series and 60 for GE’s previous system, the 7F 3-series.

“It’s the ability to respond rapidly to demand increases, when the wind stops blowing or a cloud goes in front of the sun,” said Donohue.

The new system also beats the older GE one in “turn-down,” which means the level of power generation at which it can “idle” when its power is not needed. The new system can run at 105 MW while still meeting emissions limits, whereas the older system could only idle at 145 MW. Donohue noted that like a driver deciding whether to leave their car idling or turn it off when they dash into a convenience store, the operators of natural gas plants are constantly deciding whether to “turn off” their plants or leave them running at a low level when power is not needed. If they are turned off completely, it takes about half an hour to get back up to full generation capacity.

Chicago was the tenth stop for GE’s truck, which was also in Kansas City and will go through Columbus, Ohio after heading to the East Coast (a planned New York City stop has been cancelled because of Hurricane Sandy).

Donohue said they’ve had enthusiastic interest from utilities and other companies that build or advise builders of power plants. In Chicago he met with representatives of about 40 companies including Michigan utility Consumers Energy, and engineering and consulting companies including KBR and Sargent & Lundy.