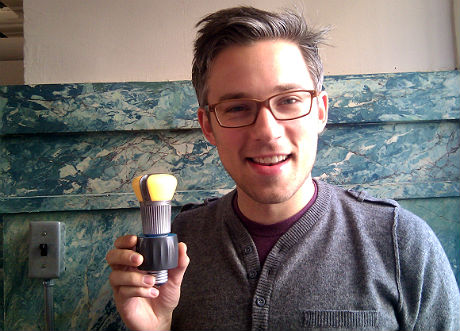 Zach Supalla of Minneapolis invented the Spark Socket, a Wi-Fi-connected light socket that lets users control their lights with an app on their phone or computer. (Photo by Dan Haugen / Midwest Energy News)

Zach Supalla had the proverbial light-bulb moment last December while flicking on lamps in a hotel room.

Instead of walking to every corner of the room, wouldn’t it be easier if there was an app for this?

The former McKinsey & Co. analyst went home and founded Spark, a connected lighting company that’s getting ready to release its first product, a socket that connects to a home wireless network and lets people switch light bulbs on and off from their phone or computer.

The Spark Socket is among a wave of new “smart bulb” products that are about to hit the market. The devices promise to give customers better control over their lighting, as well as more information about their electricity use.

But are they more than cool gadgets? Could they help people save energy and money, as some claim they will?

From start-ups like Spark to tech giants Apple and Google, several companies are betting there’s going to be a market for a better light switch, and some are proving that demand already exists.

In September, a San Francisco inventor raised $1.3 million in a Kickstarter campaign for LIFX, a Wi-Fi-enabled LED light bulb that’s controlled from a smartphone app. More than 9,000 people pledged a minimum of $69 for one of the bulbs.

Google also announced last year that it was collaborating with Florida-based Lighting Science Group on an Android-app-controlled LED bulb, and another company, GreenWave Reality, says it’s working on a $20 smart bulb.

Spark, which is based in Minneapolis, is unique in that its product works with any dimmable bulb. The device screws into any socket, similar to a power outlet adapter, and a bulb then screws into the Spark Socket, which will connect to an app via a built-in Wi-Fi module.

Supalla hopes customers will help come up with other uses for the device. The company plans to use open software that will allow any developer to write programs for it. Some of those uses, he hopes, will involve energy conservation.

Another inspiration for the product was his father, who is deaf and uses a flashing light as a doorbell. He hopes the Spark Socket might facilitate more creative uses for light among the deaf community, such as flashing when an urgent text or email arrives.

He’s built a three prototypes, including two that work and one that shows how the finished product will look. The company plans to launch a Kickstarter campaign next month, with a $50 pledge earning backers one Socket once they’re manufactured.

‘We’ve got some ideas’

“All of a sudden now what we’re seeing is the electronics industry take a look at the lighting industry and say, ‘hey, we’ve got some ideas,'” says McGowan.

The lighting industry’s innovation usually revolves around cost, efficiency and performance, but in the past couple of years McGowan is seeing more new lighting products that don’t fit those categories.

“It really has to do with making the light bulb more entertaining, more interesting, perhaps more functional,” he says. “It’s a usage shift, perhaps driven more by ‘we can do it’ rather ‘than we need it.'”

And they can do a lot. More than just timers, the devices can automatically switch lights on when you get home and turn them off when you walk out the door. They can gradually dim the lights when you go to bed and bring them up for an alarm clock. The LIFX bulb even promises to create mood lighting that matches the music you’re listening to.

On their websites, LIFX and GreenWave Reality both claim their products can help customers save energy and money — and that’s true if they’re replacing an incandescent or other less efficient bulb. Compared to other LED bulbs, the case is less clear.

“When you go from an incandescent to an LED bulb, you’re going from let’s say 100 watts down to 12 or 15 watts. That’s where the savings are,” says McGowan. Squeezing out more energy savings with smart controls is tough because LEDs are so efficient on their own.

Some of the products, such as the Spark Socket, promise to tie into an energy management dashboard, making it easy for users to see how much power they are using, which tends to drive down consumption.

A February 2012 research report by the American Council for an Energy Efficiency Economy found that homes that receive real-time data about their energy use tend to use about 4 percent less energy. However, if smart bulbs’ energy management tools are limited to showing only lighting energy use, it’s probably safe to assume the impact would be less.

“We are not aware of any studies on how much energy is saved by smartphone and tablet lighting controls in homes. In fact, there are not many studies on the energy savings of residential lighting controls, including switches, dimmers, timers, and vacancy/occupancy sensors,” says Rebekah Mullaney, research communications manager for the Lighting Research Center at the Rensselaer Polytechnic Institute in Troy, N.Y. That said, “in general, controls can save energy if the users are motivated and the system is properly commissioned.”

Supalla thinks energy savings will be a likely side effect for Spark Socket customers, but he isn’t leaning on energy conservation as a main selling point, in part because that’s a tough sell to make with many homeowners.

Instead, says Supalla, “We’re selling this product on the value proposition of: check out all the cool things you can do with this.”