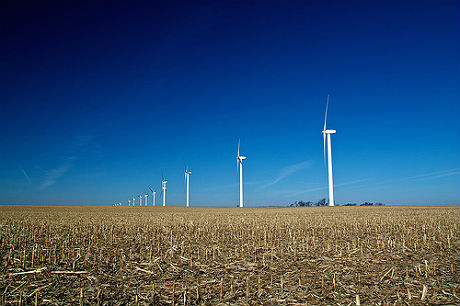 A wind farm near Dodgeville, Wisconsin. (Photo by Dave Hoefler via Creative Commons)

A highly influential conservative policy group with strong ties to the fossil fuel industry plans to make repealing state renewable policies a “high priority” in the coming year, potentially raising the stakes for legislative elections across the country.

The American Legislative Exchange Council, or ALEC, promotes model legislation that’s drafted by committees of corporate sponsors and state lawmakers, who then work to pass the bills in multiple states.

“They can be devastatingly effective,” said Doug Clopp, deputy program director for Common Cause, a nonprofit government accountability group that tracks ALEC’s influence. “Their ability to take this bill and actually drive it into dozens of state legislatures is considerable.”

The group has been behind some of the country’s most divisive legislation in recent years, from voter identification laws to the Stand Your Ground gun policies. The battles have cost it some high profile corporate sponsors, but it still counts nearly 2,000 state lawmakers as members.

The legislation ALEC is encouraging members introduce is called the Electricity Freedom Act. The organization provided a copy of the model legislation to Midwest Energy News. (Update: ALEC says it mistakenly provided us with an older draft of the model bill. The latest, final version is here. You may view the earlier version here.)

The bill says that wind and solar power are expensive and unreliable, and that forcing utilities to use renewables threatens electric grid reliability and will increase the cost of doing business through rate increases or higher taxes.

The proposal was written by an ALEC task force funded and comprised of representatives from major oil, gas and power companies, including BP, Chevron, ExxonMobil, Koch, and Shell.

Wynn cites several state economic studies, many produced by the American Tradition Institute (ATI), a free-market think tank that claims in Minnesota, for example, rates will skyrocket as much as 37 percent by 2025 because of the state’s renewable mandate.

The eye-popping predictions from ATI’s reports, however, don’t match the experience so far of most states and utilities. The reality is that the rate impact of renewable standards has been mixed but mostly modest, and in some states they appear to have helped keep prices down.

That’s according to interviews with several Minnesota utilities, as well as a policy paper by Richard Caperton of the Center for American Progress, who found 12 of 22 states with renewable standards saw rates rise slower relative to states without the policies.

“I think there’s some debatable assumptions that they make,” said Caperton, who reviewed some of the studies cited by ALEC. They assume coal and natural gas prices will be very low and stable over time, and they don’t count any environmental benefit to society from renewables.

“Coal-fired power plants should cost us an extra 18 cents per kilowatt hour just for the health impacts, and we pay that — through our hospital bills,” Caperton said.

Natural gas is currently cheaper than most renewables, and coal has historically been, but forecasters, including a Chevron strategist last week, are beginning to speculate about the end of cheap gas and coal.

“I think it’s very short-sighted,” Joe Sullivan, a regional policy manager Wind on the Wires, said of the ALEC legislation. Wind on the Wires is a St. Paul-based policy group that works on wind energy and transmission issues, and is a member of RE-AMP, which also publishes Midwest Energy News.

Sullivan said wind power has proven to be cost effective for utilities — a point backed up by some utilities themselves. Minnesota’s largest utilities have said they would have added wind power in recent years regardless of the state’s mandate.

To that point, Wynn said that’s fine. Utilities can make that choice. “ALEC does not oppose renewable energy in any way,” he said. “We are simply opposed to mandates which force electric utilities, and thus ratepayers, to provide these energy sources over other sources.”

Twenty-nine states have adopted renewable standards, and several of them were passed under leadership from Republican governors, such as Minnesota’s under Gov. Tim Pawlenty.

Sullivan said the policies still have a good level of bipartisan support. Lawmakers who represent districts with wind operations tend to support the mandates, which may help protect them from repeal attempts.

Clopp, of Common Cause, said renewable advocates should be worried. ALEC’s proposal is “out to do one thing, and that’s to maximize the profits of fossil fuel industry and eliminate renewables from competition. I don’t see where the freedom is in that.”