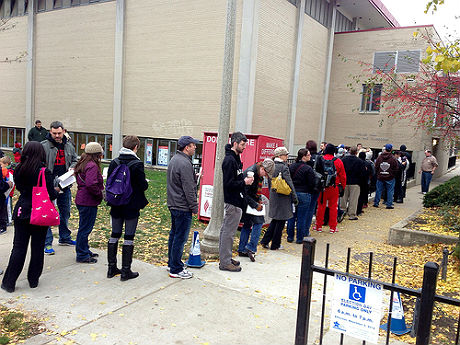 Chicago voters have approved a ballot referendum authorizing the city to move forward with municipal aggregation, wherein the city will buy electricity on behalf of close to one million residents.

City officials had promoted aggregation primarily as a way to save money for ratepayers, compared to the rates they would have been paying to get electricity through the utility ComEd. Meanwhile popular support for aggregation was driven largely by the hope that it will facilitate the purchase of more renewable energy and ideally the creation of new renewable generation.

Unofficial returns from the Chicago Board of Elections show the measure passing with 56 percent approval.

Since the state legislature passed a law allowing municipal aggregation in 2009, more than 250 communities have taken that route.

Under state law, a majority of people voting on the Chicago referendum needed to vote “yes” in order for the city to adopt an “opt-out” aggregation program, wherein people are automatically enrolled unless they specifically opt out in order to remain with ComEd or purchase from an alternative supplier on their own.

On Oct. 30 Mayor Rahm Emanuel’s office issued a request for qualifications inviting interested energy suppliers to submit proof they could reliably supply power including clean energy to a significant portion of Chicago’s customers. With the referendum passage, the city will institute a bidding process, decide on proposed contracts and seek public input. A final contract or contracts will need to be approved by City Council.

The city might select just one or several energy suppliers. ComEd will continue to deliver the electricity on their wires and bill customers; and the city has committed to keep rates under aggregation at least as low as ComEd’s rates. Getting cheaper prices in the near future is expected, since ComEd is locked in long-term contracts signed when power was more expensive. But some of those contracts expire on May 31, at which time beating ComEd’s rates will be more difficult. Experts have projected a total savings of about $100 million over several years under aggregation, equating to roughly $100 per household.

The city hired consultants – the non-profit sustainable development-focused Delta Institute and energy expert Mark Pruitt – to host four community meetings and do other public outreach in the weeks before the election. Mayor Rahm Emanuel voiced his support for aggregation and clean energy groups promoted the idea.

“Chicagoans voted for an innovative opportunity to get more renewable energy like wind and solar in their power mix and save money on electricity bills,” said Howard Learner, Executive Director of the Environmental Law & Policy Center, in a statement after the vote. “We will work with Mayor Emanuel to make Chicago a leading model for reliability and green energy procurement.”

But energy analysts have warned that without a legislative fix to the state’s Renewable Portfolio Standard, aggregation won’t necessarily spark any new construction of renewable energy generation and might actually inhibit new renewable energy projects in Illinois.

That’s because of a complicated structure set up by the RPS law wherein ComEd enters long-term contracts (negotiated by the Illinois Power Agency) with power producers which can drive new wind farms or other renewable development. Under aggregation, the alternative electric suppliers enlisted by municipalities will typically only enter short-term contracts of one or two years – not a long enough commitment to drive new construction of renewables.

The proposed fix to the RPS would essentially put a portion of ratepayer dollars collected from the alternative suppliers into the same “pot” as a portion of the payments negotiated by the Illinois Power Agency, and it could all be used to fund new in-state renewable construction.

Under aggregation the city could decide to buy a certain amount of renewable energy or it could limit or ban purchases of coal-fired power, Pruitt explained at the first community meeting, as long as the rates ultimately stay cheaper than ComEd’s. He noted that the city could also reinvest any cost savings not passed on to ratepayers in renewable energy projects. But skeptics note that especially after May 2013, these cost savings may not amount to much.

The San Francisco-based group Local Power has also proposed that Chicago could finance their own renewable energy projects through municipal bonds and other measures, and that savings through energy efficiency could free up funds for renewable investment.

Illinois Sierra Club president Jack Darin said the group is very pleased the city voted for aggregation, even though it is still “really hard to say” what it will mean for residents’ energy mix.

“Chicago is trying to be proactive in supporting clean energy through aggregation,” he said. “They can only buy what people offer to sell them, but with a load that size I’m hoping there’s enough competition in the market that people will be offering some pretty creative clean energy packages to Chicago.”

Learner and Darin both said they support a fix to the RPS and Learner said “ELPC will work with Mayor Emanuel to improve the Illinois Renewable Energy Standard to make it work efficiently and effectively.”

Darin said there are likely ways the city and alternative providers can drive local and regional renewable energy growth even without the RPS fix.

“The (renewables) industry needs to be developing other ways to keep growth going, and if the RPS is not fixed and the Production Tax Credit is not extended, clean energy generation by big cities like Chicago may turn out to be one of the most important things that keeps the industry afloat,” Darin said. “In the interim this is something very concrete that Chicago can do that doesn’t depend on Washington or Springfield…I’m very proud that Chicago had a year that began by closing two dirty coal plants, and ended the year by creating the mechanisms to replace that power with clean energy.”

In a recent letter to the Chicago Sun-Times, the Illinois Coalition to Protect the Public Commons had urged a “no” vote on the Chicago referendum because the group feared the emphasis on cost savings would drive the city to buy from larger alternative suppliers that rely heavily on nuclear power rather than driving renewable development.

Evanston, the suburb just north of Chicago, in August enacted municipal aggregation. That meant customers are getting their power from Exelon subsidiary Constellation Energy instead of ComEd. Constellation will provide the town with energy from 100 percent renewable sources, by purchasing Renewable Energy Certificates (RECs) from regional wind farms built since 1997. But some critics don’t like the association with Exelon, which is a major producer of nuclear power.

Under aggregation it is practically guaranteed Chicago will need to buy some nuclear power, especially if it decides to forego coal, given the reality of the state’s energy resources. “They may be able to get some commitments not to use coal, but some environmental groups want to say no coal and no nukes which by the way means you’re not going to get power,” said an energy expert who asked his name not be used.

Dorian Breuer, an activist heavily involved in the fight to shut down the city’s two coal plants, said he became increasingly disillusioned with the idea of aggregation when it became clear the city’s main focus was on price, not renewables. He said he began feeling “maybe we should just leave aggregation alone because really there’s nothing in it for us unless we can extract a guarantee from the Mayor’s office that we will have renewables.”

He thinks as things stand now, “It will result in an all or almost all ‘regular’ energy mix – mostly coal and nukes and natural gas with a sliver of renewables. And to boot, depending on when Emanuel is going to be able to get all this to happen, he may not even be able to get a price reduction.”

The ELPC and Sierra Club are members of RE-AMP, which also publishes Midwest Energy News.