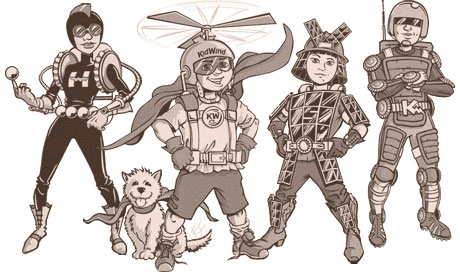 Faced with flat electricity demand, cheap natural gas, and an expiring federal tax credit, the wind industry could use a superhero right about now.

Could an imaginative kid with a cape and a helicopter helmet help?

KidWind is the new face of the KidWind Project, an educational company in St. Paul, Minnesota, that sponsors a national “pinewood derby” of wind turbine design.

The organization sells wind turbine and solar car science kits to schools and teachers across the country, and now it wants to get those kits into retail stores with the help of its kid superhero.

KidWind is one of five new characters dreamed up by a Twin Cities ad agency to be the face of those new products, which will come with a series of comic books as well.

There’s KidWind, the every-kid whose turbine helmet lets him to fly. KidSolar has a suit made of photovoltaic panels and a battery belt that lets him blast light and holograms at opponents. KidHydro is a natural swimmer with shoulder turbines that pressurize a set of water tanks that can be used for propelling through the water. KidKinetic is the athlete who stores energy from his movement in a battery backpack. And Circuit is their sidekick dog whose tail creates a breeze for KidWind.

The characters will star in the comic book series, and one will be spotlighted in the packaging for each of the company’s four renewable energy science kits: the wind turbine and solar car, along with a hand crank generator and a Pelton wheel hydro turbine.

“We’ve had this dream for a while to branch out into the retail realm… as a way to reach people beyond the classroom,” says Joe Rand, KidWind’s training and outreach director. “The mission remains the same, which is to enlighten people on the science behind renewable energy.”

‘It’s a part of our kids future’

KidWind was founded in 2002 by a Monterey, California, school teacher who wanted to inspire more teachers and students to learn about renewable energy. In addition to organizing an annual wind-turbine design competition for kids, the company offers materials and training for teachers who want to incorporate energy concepts into their curriculum. It’s trained more than 7,000 teachers and helped students build more than 50,000 wind turbine science projects.

Classroom education will remain its core focus, says Rand, but they see an opportunity to broaden its reach by selling a version of the kits in museum gift shops, hobby shops and other retail stores.

Prairie Wind Toy Co. in Brookston, Indiana, has been selling wind turbine toys on its website and at festivals for about five years. They’ve been selling pretty well, says founder Dave Alm, but not enough for him to quit his day job selling and servicing computers.

Alm’s father has been making antique toys since 1953, and Alm was inspired to start a wind and solar toy division after realizing how important renewable energy has become to farmers in the region.

“Kids of my generation, we played with trucks and tractors and little metal combines and stuff like that,” says Alm. Today, wind turbines are another piece of the farming landscape. “This is a real part of the ag economy. It’s a part of our kids’ future.”

And if long-term growth projections are correct, the renewable energy industry is going to need kids today to be interested in tomorrow’s wind and solar jobs.

“The industry is going to need a large and diverse workforce,” says Rand. “We need students to be excited about careers and opportunities in clean energy fields. We’re trying to support that workforce by getting students excited about these technologies.”

In the Marvel Comics series, Iron Man’s suit is powered by a mysterious clean energy source called an Arc Reactor, which promises to make nuclear power obsolete — and blow bad guys to bits with blasts of energy.

The scrappy KidWind characters have powers that are far less intimidating, but more accessible, and that’s by design.

“It’s unfortunate that [clean energy] is sometimes designated as superhero status and doesn’t seem like a reality today,” says Rand. “It’s not a superhero thing and it’s not a thing that’s 500 years away. It’s a thing that we need to deploy now.”

It will still require some superhero fundraising before KidWind’s line of retail toys and comic books become a reality, though. The company is trying to raise $75,000 through a Kickstarter campaign. As of Monday it has raised less than $13,000 with 13 days to go.

About $30,000 of that fundraising goal will be used for new injection molds. Another $20,000 is needed for product testing that’s required for retail products. And $25,000 will be used for packaging, materials and marketing.

Price and packaging design are critical factors in determining whether a toy is successful, says Richard Gottlieb, CEO of Global Toy Experts, a New York toy consulting company. So is fun.

“Ultimately that child comes home from school and he or she doesn’t want to get more education. They want to play. So a great toy has to compete with video games, the iPad, everything that’s in that house,” says Gottlieb. “This product has to provide great play value, and then education is a byproduct.”