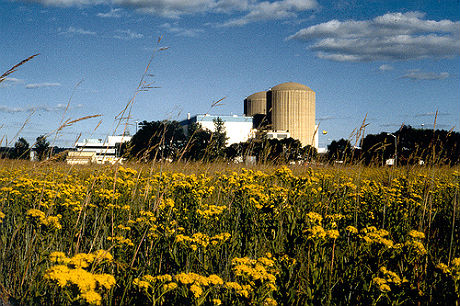 The Prairie Island nuclear plant in Minnesota. (Photo via NRC)

Minnesota’s Prairie Island Indian Community says it’s time for nuclear regulators to get real about the likely amount and duration of spent fuel storage at a dry-cask facility in the tribe’s backyard.

An Atomic Safety and Licensing Board will hear arguments today in St. Paul over whether the tribe can intervene in re-licensing proceedings for Xcel Energy’s Prairie Island nuclear waste storage facility in Red Wing, Minnesota.

“All we’re saying is let’s be realistic about this,” said Phil Mahowald, the tribe’s general counsel.

The 20-year-old Prairie Island facility was originally built and licensed as temporary storage until the federal government built a national nuclear waste repository at Yucca Mountain in Nevada.

But with Yucca Mountain plans officially abandoned under the Obama administration, the Prairie Island Indian Community says regulators need to assume whatever storage they approve may exist on the site for centuries rather than decades.

The tribe’s case is bolstered by a recent circuit court decision, which threw out a U.S. Nuclear Regulatory Commission (NRC) rule that allowed it to make licensing decisions without considering the long-term impact of waste storage.

Since 1984, nuclear regulators have relied on a federal Waste Confidence Rule, which said decisions on spent fuel storage could assume that waste would eventually be transferred to a permanent federal storage facility.

The rule blocked nuclear opponents from introducing arguments about long-term safety and environmental concerns in licensing hearings, but in June the U.S. Court of Appeals for the District of Columbia said the rule is flawed and insufficient.

The NRC has two years to re-write the Waste Confidence Rule, and until then it’s suspended all decisions on nuclear reactor licenses and renewals. The commission wasn’t explicit about whether that moratorium includes spent fuel storage decisions.

The court decision has given nuclear opponents an opportunity to introduce legal arguments that have been off-the-table for decades, and also raised the possibility that the NRC and utilities may need to produce longer-term environmental impact studies.

“You have to look at the impacts from cradle to grave, and you’ve just lost the grave part,” said Diane Curran, a Washington, DC, attorney who has represented citizen groups and local governments in nuclear cases for more than three decades.

Today, the Prairie Island Indian Community will ask an Atomic Safety and Licensing Board to let it intervene in the Xcel spent fuel storage case, and to make arguments about the lack of study about long-term environmental impacts.

The tribe wants the NRC to postpone its decision on Prairie Island waste storage re-licensing until after the Waste Confidence Rule is replaced. The commission also supports this delay, though Xcel wants to proceed now.

The tribe also wants a broader environmental impact study, one that assumes the facility will double in size and stay in place for up to 200 to 300 years. Xcel is seeking renewal for 48 casks for 40 years, but it already has fuel on site to eventually fill 98 casks.

Xcel has already received permission from state regulators to expand to 64 casks at the site. The utility said in a statement that the impact of additional casks would be studied at the time they are proposed.

Where does it go?

The company’s plans assume that a centralized storage facility will be available by 2025, that it will begin shipping waste away from its Prairie Island and Monticello nuclear sites beginning in 2027, and that all spent fuel will be removed by 2066.

“We greatly value our relationship with the Prairie Island Indian Community, and we have many common interests and concerns, particularly the interest in holding the federal government accountable for removing used nuclear fuel from the plant site,” the company said.

Both the utility and tribe point to the Blue Ribbon Commission on America’s Nuclear Future, a government report released in January that recommends establishing regional repositories for spent nuclear fuel.

“We don’t think a good temporary or long-term solution is 600 yards from the Prairie Island Indian Community and adjacent to the flood plain of the Mississippi River,” Mahowald said. “There are better, safer places than Prairie Island.”

Ultimately, though, there’s “almost zero chance” that the NRC won’t approve Xcel’s license renewal request, said Dave Lochbaum, director of the Union of Concerned Scientists’ Nuclear Safety Program. It might require upgrades or apply conditions, but its options are limited.

“Saying no doesn’t really seem like an option,” says Lochbaum, “because you can’t wave a magic wand and make this waste disappear.”