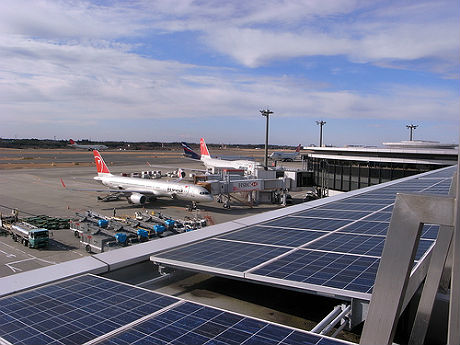 Solar panels at the airport in Narita, Japan. (Photo by Takashi M via Creative Commons)

CHICAGO — “Green taxis” that swap electric batteries within minutes as they take passengers to and from bustling airports. Countless highly efficient LED lights that dim or brighten depending on the number of people in the terminal and the amount of daylight.  A “flying windmill” tethered to the airport but soaring high enough to get more efficient wind power than most turbines. Goats munching the grass in place of diesel-burning mowers.

These are among the many emissions-reducing and other “green” innovations showcased at the fifth annual Airports Going Green conference in Chicago this week, sponsored by the Chicago Department of Aviation and the American Association of Airport Executives.

Officials from airports, airlines and other industry groups around the world discussed progress and challenges in reducing carbon dioxide and other emissions, dealing with huge waste streams, expanding airports without increasing ecological footprints and offering passengers and employees “sustainable” options from food to wellness programs.

“Working together we’ve been able to change the culture of our industry in a very short time,” said Chicago aviation commissioner Rosemarie Andolino. “Sustainability has become built into everything we do.”

Airports consume huge amounts of electricity, so they are seeking to reduce electricity usage through energy efficiency and also to generate clean energy onsite.

Marc St. Jean, Toronto Airports Authority general manager for energy utilities and conservation, noted that after a devastating 2003 regional blackout, officials decided their airport needed to be energy self-sufficient. St. Jean calls the co-generation plant opened in 2005 the airport’s “crown jewel,” noting “within 25 minutes I can power up half the airport, and the whole campus within an hour.”

Solar installations have been gaining popularity, with major projects in the works including at Chicago O’Hare and Indianapolis. However Federal Aviation Administration senior planner Chris Hugunin noted that glare from solar panels can be a concern for landing planes, and the FAA is studying the issue with new guidelines to be issued next year. All solar panel installations at airports need FAA approval.

“We want a crisp internal policy that allows us to view these projects and have them compatible with the airport environment,” said Hugunin. “There are so many variables we can control – the tilt of the panels, the orientation, where they are on the airport.”

Many airports have biomass electricity generation and co-generation plants on-site, often paired with district heating and cooling systems. Amsterdam-Schiphol airport relies on the cold water in a nearby river – which is piped through the airport property – for a heat-exchange system, and numerous airports tap geothermal heating and cooling.

In partnership with KLM Airlines, Schiphol also showcases one of the more novel airport renewable energy initiatives – a small lightweight glider that generates energy as it flies. The trademarked Power Plane is tethered by cable to a reel, and as the glider soars on the wind the spinning reel drives a generator. The company Ampyx Power says it generates as much power as a medium-sized wind turbine with less materials and less noise or local impact.

They predict that with large-scale deployment especially offshore,  PowerPlanes could generate electricity more cheaply than fossil fuels. “It makes less noise than windmills, and it flies higher so it can capture more wind,” said Schiphol senior manager of safety, environment and fire brigade Marijn Ornstein.

In conference opening remarks, Chicago Mayor Rahm Emanuel said that upfront spending on sustainability and energy efficiency ultimately pays off in job creation and other economic benefits, adding that, “If you make that investment you find all the oars are pulling in the same direction.”

Throughout the conference panelists generally agreed that airports can only invest in sustainability measures when it makes financial sense. It often does, from replacing flight information boards and lights with LEDs to recycling waste to buying electric vehicles, they noted.

Among both airport and airline executives there is also enthusiasm for the development of aviation biofuels, seen as a way to protect against the expected escalation and constant volatility of oil prices. The conference featured the Midwest Aviation Sustainable Biofuels Initiative (MASBI), wherein scientists and experts are exploring feedstocks, technology, commercialization, infrastructure and other aspects of creating an aviation biofuel industry in a 12-state Midwestern region.

Even as green airport-related investments increasingly seem to pay off, there are still many challenges.

San Francisco International Airport associate engineer Emily Lau noted that their green rental car program has hit roadblocks, with the amount of hybrid cars rented decreasing since their program started. She said rental companies don’t seem to be offering customers great deals on hybrids, and hybrids rented at the airport often end up returned at other locations and never make their way back.

Airport executives also noted that issues seemingly unrelated to sustainability and energy can impact an airport’s ability to go green, by increasing red tape and reducing revenues that otherwise could be reinvested in green measures. They pointed out government taxes and fees that they see as burdensome, and also the visa and other requirements that make it more difficult for people to travel between certain countries.

Nancy Young, vice president of environmental affairs for the airline trade group Airlines for America, indicated that U.S. airports could lose market share – and hence revenue that could help them go green – if regulatory and financial requirements and other factors reduce their share of the world market.

“We need to modernize infrastructure, enhance global competitiveness, mitigate jet fuel cost and price volatility, rationalize the regulatory burden, rationalize the tax burden,” she said. She said sustainability is dependent on “the economic pillar” —  “you have to have the money to be able to invest.”

Dallas Forth Worth International Airport executive vice president of operations James Crites noted the greenhouse gas impact of the long process involved in a Brazilian getting a visa to visit the U.S. He said it often takes at least two trips to the U.S. embassy, which might each involve flights or long vehicle trips within Brazil – emitting carbon dioxide and costing the traveler time and money.

Public opinion and political will have of course been central to the debate over climate change and how to address it, and at the conference speakers pointed out a role airports can play along with actually reducing their emissions and energy use.

That would be tapping the consciousness — the captive audience — of the many millions of people who spend hours in airports every day. Touting their own green improvements isn’t only self-interested marketing but also raises awareness about climate change and possible solutions in general, airport execs say.

And airport walls, display cases and corridors can provide a venue for public education. The conference featured a screening of the film “Chasing Ice” about National Geographic photographer James Balog and the Extreme Ice Survey documenting the rapid decline of glaciers. Denver International Airport is displaying massive prints of Balog’s stunning photos and several video public service announcements about climate change featuring his time-lapse video of glaciers. Balog told attendees he initially didn’t think the airport exhibit would have a big impact, but he was surprised to get more public feedback related to the airport than any other place his work has been exhibited.

But even with all the increased awareness of climate change, other factors often over-ride the environment for airport officials, passengers and neighbors.

Heathrow International Airport director of policy and political relations Nigel Milton noted that nearby residents and elected officials are still much more concerned about noise and other immediate impacts on their daily lives.

“At Heathrow it’s all about noise. Even if there is a penalty on carbon” in decisions about expansion and new technologies aimed at noise reduction, Milton said, “that’s a penalty we have to take.”