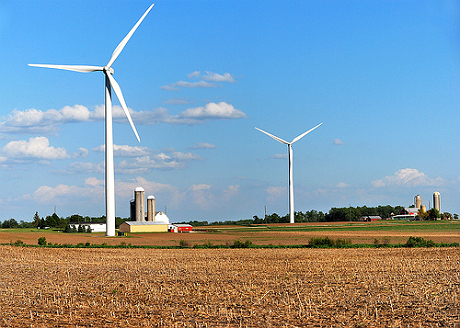 Will changing political winds in Wisconsin mean another new direction for wind energy policy in the state?

Wisconsin Republicans reclaimed control of the state’s senate last week, five months after recall elections tipped the balance to Democrats. Republicans will now hold power by a wider margin in 2013 than they held in 2011.

Wind energy advocates are worried that might mean another attempt to repeal the state’s wind farm siting rules, which limit restrictions that local governments can place on proposed wind developments.

And one Republican state senator has already announced plans to seek a repeal of the state’s renewable electricity standard, though a renewable advocacy group doubts the bill will gain enough support to pass.

“We are hearing that there are Republican senators that want to introduce positive legislation on renewable energy next year, and they want to do so in a bipartisan fashion,” Vickerman said.

RENEW Wisconsin is a member of RE-AMP, which also publishes Midwest Energy News.

While Republicans haven’t announced their energy agenda, RENEW Wisconsin is concerned about a proposal by Republican state Sen. Frank Lasee that would un-do the state’s wind farm siting policy.

Wisconsin adopted statewide wind siting rules in 2011 that put boundaries on the local zoning and permitting regulations, which had delayed or derailed wind projects in some counties.

In March, Lasee introduced a bill that would have rolled back those rules, putting wind developers back at the mercy of a messy patchwork of local rules, some of which were, in Vickerman’s words, “a never-ending obstacle course” meant to discourage any projects.

Lasee’s effort last spring came up one vote short when Republicans had a 17-16 margin in the state senate. Next year, Lasse’s party is expected to hold an 18-15 majority.

“We survived, really, by the skin of our teeth,” Vickerman said. “All other things being equal, we have to find another Republican senator who will stand [for the wind siting rules.]”

The American Legislative Exchange Council, a conservative policy group that promotes identical, model legislation across the country, says it plans to make repealing state renewable mandates a high priority in 2013.

State Sen. Glenn Grothman, a Republican from Sheboygan, has already announced plans for a bill that would freeze Wisconsin’s renewable standard at its 2012 levels.

“The 10 percent renewable portfolio standard imposed on Wisconsin utilities in 2006 was a mistake,” Grothman said in a press release. (The senator’s office didn’t return a phone call last week.)

Vickerman said he is “not particularly worried” about Grothman’s bill. That’s because renewable energy has too many allies — from landfill operators to equipment manufacturers — who understand its importance to growing Wisconsin’s economy.

“He is looking at legislation that would not only scale back commitments to wind energy, but also solar, biogas, landfill gas, hydro — all the resources are covered,” Vickerman said.

The legislation would also have very little practical effect, Vickerman said, because most of the state’s utilities have met their requirements for 2015 already.

Gary Radloff, director of Midwest energy policy analysis for the Wisconsin Bioenergy Initiative at the University of Wisconsin-Madison, said it’s tough to generalize about legislators’ positions on energy.

“My experience has been that there’s a pretty broad continuum of views on energy, and that there’s people within the Republican caucus who see the benefits of renewables, especially bioenergy,” Radloff said.

Renewable energy has broad support from the public and businesses in Wisconsin, Radloff said. He thinks there’s more recognition today that a broad, all-out attack on renewables would not be popular.

His advice for lawmakers: “I would urge elected officials from both parties to go slow on dramatic energy policy change around renewables,” he said. “I think it’s really important that they go slow, keep an open mind, and recognize that the world is changing.”