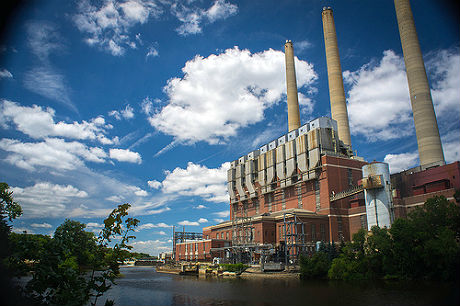 The Otto E. Eckert Station in Lansing, Michigan is among the power plants the Union of Concerned Scientists says is "ripe for retirement." (Photo by David Shane via Creative Commons)

The Midwest is full of coal plants that can’t compete economically with cleaner energy sources and could readily be retired over the next several years, according to a report released yesterday by the Union of Concerned Scientists (UCS).

The report spotlighted 353 coal-fired generating units nationwide that are among the walking dead—plants which would be more expensive to upgrade with modern pollution control equipment than to simply close. Those plants produce 59 GW of electricity.

Add in another batch of plants that produce 41 GW and are already slated for closure, and a full 30 percent of the nation’s coal-fired generation capacity could be retired by 2020, the group concluded.

Four Midwestern states—Ohio, Indiana, Michigan and Wisconsin—were among the top 10 states with the most coal-fired generation capacity that could be phased out.

“The Midwest is home to many of the nation’s largest coal generators, but also home to many small, old, inefficient generators,” explained Steve Frenkel, director of UCS’s Midwest Office in Chicago. “Many of these generators have not been modernized with controls necessary to protect public health and the environment, and they cannot compete with natural gas,” Frenkel said.

The uncompetitive coal plants in the region were owned by some of the nation’s largest power companies—including Duke Energy, American Electric Power, and First Energy. All three companies have “made significant progress” in shutting down or mothballing aging and dirty coal plants, said Jeff Deyette, a UCS energy analyst and coauthor of the report.

How the plants were assessed

The UCS analysts developed an economic pass-fail test and evaluated 1,169 operating coal-fired generating units nationwide that were not already scheduled for closure.

They first calculated operating costs of each plant. If the plant lacked widely available pollution control technologies to clean up sulfur dioxide, NOx gases, particulate pollution and mercury, they added in the cost of installing those technologies. These controls are needed because the U.S. Environmental Protection Agency (EPA) has in recent years tightened rules controlling all of those pollutants.

The coal plants passed the UCS’s test if, after the upgrade, they produced power at lower cost than a natural gas combined-cycle plant. If not, they failed and were listed as ready for retirement.

Not surprisingly, uneconomic coal plants were concentrated in states where electricity generation is particularly coal-dependent. Ohio had more coal plants ready for retirement than any other state—59 coal generators that produce 8.9 GW. However, 43 of those were already being phased out—also more than in any other state.

Many coal plants were already on the way out in Indiana as well. Forty coal generators producing 4.7 GW were ready for retirement in the state by UCS’s criteria. Closures have been announced for 24 of them.

“Some utilities and power generators have seen the writing on the wall,” Frenkel said. “They already recognize the market opportunity to save consumers money and reduce operating costs with natural gas and wind power.”

That’s not universally true, however. In contrast to Ohio and Indiana, Michigan and Wisconsin had many coal plants that were ripe for retirement. Forty-one Michigan coal generators producing 3.8 GW that were ready for retirement, but closures have been announced for only two of them. And 26 Wisconsin plants that collectively produce 2.8 GW were ready to be retired, but closures have been announced for only eight of them, UCS reported.

All four of these states have coal plants built before the early 1950s, Frenkel said. “Because they’re so old, they don’t operate efficiently. And the cost of modernizing them would make them uneconomical compared to natural gas or wind.”

What happens if the plants all shut down?

In each of the regions analyzed, there was plenty of capacity for natural gas, wind and energy efficiency to pick up the slack from all the uneconomical coal plants and ensure a reliable supply of electricity, UCS reported.

“We believe there is sufficient energy-generating capacity available in the Midwest to safely and reliably shut down many of these old, uncompetitive coal plants and shift toward cleaner energy resources,” Frenkel said.

And if that happened to all 353 units UCS flagged nationwide, it could take a big bite out the utility industry’s planet-heating carbon emissions—up to 16 percent if the coal was replaced entirely by renewables or energy efficiency. Phasing out all that coal would also reduce levels of pollutants that raise risks of asthma attacks, heart attacks, cancer, and harm children’s developing brains.

And natural gas could be even more competitive with coal than UCS estimated. The UCS analysts assumed, conservatively, that natural gas prices would be what the Energy Information Administration assumed in their annual outlook, $4.88 per million British thermal units (MMBTu). But natural gas prices today are $3.50 per MMBtu, although many experts expect them to begin rising again.

UCS is not calling for the plants that failed the tests to be closed, nor for all the plants that passed to stay open, Frenkel said. They’re saying that “utility investors and regulators should carefully evaluate the economic reality of all coal plants.” And when they do, “our study suggests that such evaluation might lead utilities to choose to retire plants identified in our study.”

Editor’s note: An earlier version of this story misstated the percentage of the nation’s coal fleet that could be retired. It is 30 percent, not 18 percent.