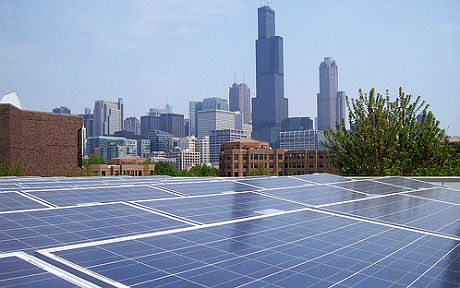 When Chicago voters approved municipal aggregation on Election Day, some celebrated the possibilities offered by breaking with utility ComEd for alternative providers, while others worried whether it would be a wash or even a blow for renewable energy.

Paul Fenn, a Bay Area energy law and policy expert known as a father of the community choice aggregation (CCA) movement – roughly the same concept as municipal aggregation – cast his lot with the former group.

Chicago officials have stressed that cost savings are their priority, and local experts say the impact on renewables remains to be seen, especially since a fix to the state’s Renewable Portfolio Standard is needed to spur renewable growth.

But Fenn thinks that with an aggressive and creative approach, Chicago can have its cake and eat it too – generating cost savings while sparking a boom of local and regional renewable energy construction; creating solar, co-generation, wind and other energy installations owned largely by the city and individual residents.

He thinks that in five years, Chicago could be getting 50 to 75 percent of its energy from local or regional renewables. He envisions rooftop solar PV on homes, businesses and municipal buildings; wind or solar installations on vacant land, co-owned by surrounding neighbors; waste heat captured from downtown buildings and factories to generate hundreds of megawatts of electricity. And massive investments in energy efficiency to greatly reduce the city’s overall energy demand.

“You could have local companies designing, building, maintaining and operating the systems,” Fenn said. “The city would probably be involved in labor training programs to get local people in those jobs. Any customer, residential, business, large or small, would be offered as a standard component of service the opportunity to own their power.”

As proof this is not just a pipe dream, Fenn points to San Francisco, where the company he heads, Local Power Inc., is helping the city launch its own aggregation-related renewable energy program, called CleanPowerSF.

In Chicago the aggregation plan mandates that the city meet or beat rates offered by the utility ComEd, and the city will enter into short term (likely one- or two-year) contracts with energy suppliers (or a single supplier) who will procure energy from different sources.

San Francisco’s plan, adopted in 2006, will be based on longer-term contracts and will emphasize actually constructing new renewable energy installations within the city or surrounding region. The city ordinance governing the plan, like Chicago’s, includes a “meet or beat” provision compared to market rates, but that will apply at the time contracts are signed, and over the long-term rates paid by aggregation participants could fluctuate above and below market electricity rates.

Fenn said that by investing in a “hardware hedge” — renewable energy infrastructure that can generate power for the foreseeable future with no fuel costs — residents should come out ahead in the long run.

This coming year San Francisco will launch “phase one” of the program, wherein about 100,000 participants will buy electricity through the city procured by Shell Energy, which will supply 100 percent renewable energy. About five percent will come from renewable energy certificates (RECs), according to Fenn, and the rest will involve contracts with area wind farms.

Phase two of the project will kick in a year later, with more participants enrolled and a shift to reliance on new renewable energy projects built in the area, combined with RECs and other sources as needed. After the first phase ends, the program aims for 51 percent renewables by 2017 and 100 percent by 2020, though these goals are not binding.

San Francisco’s aggregation plan is to use revenue from ratepayers and also leverage other funding sources, including municipal bonds, to help people and businesses install their own systems, to incentivize the construction of local renewable power by private companies and to build renewable energy installations owned by the municipality.  Major energy efficiency overhauls will also play a big role, reducing overall demand for energy.

The San Francisco plan calls for $1.4 billion in new investments, including a 150 MW wind farm and 3 MW of solar.

The city’s plan depends in part on an existing bond program which offers financing for solar panels, with the bonds to be repaid through revenue from electricity rates that the city collects under aggregation.

In a 2008 story in the trade journal Natural Gas and Electricity, Fenn and attorney Howard V. Golub noted that municipalities can build new power projects more cheaply than investor-owned utilities, in part because they typically finance projects entirely through lower-cost municipal debt, whereas utilities rely about equally on debt and equity.

Overall, Fenn and Golub say, a municipality’s capital financing costs can typically be two-thirds of what an investor-owned utility would pay: “For capital-intensive projects, particularly renewable energy generation, this is a formidable advantage.”

Fenn added that municipalities have control over zoning and permitting decisions, and have relationships with state regulators — which should make it easier to build new renewable energy installations, compared to the challenges faced by private developers.

Would it work in Chicago?

Depending how it plays out, San Francisco’s example could offer hope to Chicagoans who are unsure or cynical about the outcome of their own aggregation vote. Chicago clean power advocates want aggregation to mean the city procures renewable energy, and ideally they want it to drive new renewable construction, rather than just purchasing renewable energy credits.

Many municipalities including Cincinnati, and the Chicago suburbs of Evanston and Oak Park, have committed to purchasing 100 percent clean power under their aggregation programs. However they meet these requirements largely or entirely through the purchase of credits, often from out-of-state sources.

Fenn said he met with Chicago officials this fall and got an enthusiastic response for his ideas. He said he has not done the math for Chicago, but he has developed detailed plans for Sonoma and San Luis Obispo counties in California indicating that cities could incentivize, invest in and build renewable energy projects locally while still keeping rates competitive.

Local Power also worked with the city of Boulder, Colorado to design their proposed municipal “green” utility. A hard-fought referendum vote last fall authorized Boulder to explore the process of breaking with utility Xcel and creating its own utility. The local government is still in the relatively early stages of study, and it is not clear whether the plan will ultimately be realized.

In Chicago, aggregation is predicated on ratepayer savings. With 50 percent or more of the electricity supply coming from renewable sources, some experts say, it is virtually impossible to compete with the cost of electricity generated by coal, nuclear and gas plants.

“We’re not San Francisco – this was sold to the people as savings,” said an energy expert who asked his name not be used.

Fenn stressed that boiling things down to a simple competition between the cost per kilowatt hour of different fuel sources is the wrong approach. He proposes a radical re-imagining of the whole way we view and price energy, moving away from charging for the amount of energy used and finding other billing mechanisms that encourage conservation and take a holistic view of the city. That would include identifying buildings that are energy hogs, and figuring out how to reduce their demand.

“Energy doesn’t just have to be the Rockefeller model,” Fenn mused. “He made a lot of money through vertical integration, taking over the industry, controlling everything from drill site to gas station. That’s the business model of the industry. But why do we have to be so fuel-centered, centralized-generation-centered? (Large utilities) resist demand side management, communication technology, solar, all the innovative stuff – because it eats a hole into their business model… CCA opens up a new model.”

Experts say Chicago’s aggregation energy plan likely will include significant energy efficiency investments, and the mayor’s office has already rolled out a comprehensive retrofit plan including the concept of funding retrofits on public buildings through private investment to be paid back by energy savings.

Illinois Sierra Club president Jack Darin said he can imagine aggregation facilitating renewable energy installations within Chicago city limits in the near future, specifically with rooftop solar. Since the city will be deciding where to purchase energy under aggregation, Darin noted that the city could require the alternative electric suppliers it works with to pay residents for the electricity they generate.

“If we can add further incentives for people to install solar by asking Chicago suppliers to buy some of the output, that could be a game changer for Chicago rooftop owners, electricians and others that get work installing them,” Darin explained. “It could really jumpstart the solar industry locally.”

Dr. Bob Vogl would like to see a Local Power-inspired model in Chicago, and he’d like to see it first tried out in smaller communities like Oregon, Illinois, where he and his wife co-founded the Illinois Renewable Energy Association. For 13 years they’ve hosted annual renewable energy fairs encouraging people to install solar, wind and other measures at their homes. The Vogls became intrigued by Fenn’s outlook after he visited the fair a few years ago. Bob Vogl is also inspired by the small town of Osage, Iowa, known as the energy conservation capitol of America, and the South Pacific island of Tokelau, which is fueled entirely by solar energy.

“It’s sort of mind-blowing to people – that’s why you need these concrete examples,” Vogl said. “We’ve seen that work to a certain extent with local food efforts. If we’re presented with a possible model, other communities will probably move in this direction.”