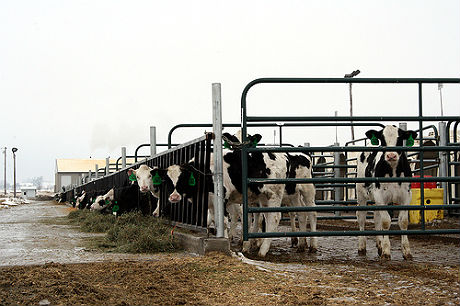 As Wisconsin shifts its renewable energy incentives to invest more aggressively in on-farm anaerobic digesters, bioenergy advocates say one utility’s interconnection requirements have stalled some projects in their territory.

State regulations allow utility companies to determine the type of communications links that energy sites need to handle emergencies such as a downed power line. Alliant Energy mandates expensive fiber optic communication cables to meet the requirement, which some critics say is overkill.

Fiber optic cables can cost approximately $11 a foot, and since some biodigesters stand several miles from the grid, those costs can add up to hundreds of thousands of dollars comprising a hefty percentage of the project’s total cost. Lower-cost radio, Internet and satellite links are all used as alternatives around the country.

Alliant’s rule also applies to solar and wind power, but solar projects in Wisconsin are generally too small to be connected to the grid, and wind projects are usually large enough that interconnection comprises a smaller percentage of total costs, said Peter Taglia, a Madison-based independent biogas consultant.

“The bigger picture is that there is no uniform standard for interconnection in Wisconsin and in most states, and that creates a barrier that biogas developers, owners and farms run into,” Taglia said.

“The question would be: why is it so much more onerous to interconnect a biodigester on Alliant’s territory than another utility’s territory? Is there a reason for it? And the answer is no. This is resulting from the fact that this is being decided by individual engineers and there is not a statewide standard,” he said.

Bill Johnson, a bioenergy consultant and former manager of agricultural services for Alliant, characterized Alliant’s fiber optics requirement as a case of priorities.

Electricity produced by biodigesters can cost up to 3 to 5 times more than Alliant’s self-produced energy, decreasing incentive to embrace the technology.

“The motivation for utilities to purchase this is not very strong,” he said.

Jim Krier, a senior engineer with Alliant Energy, said Alliant’s use of fiber-optic cables isn’t meant to discourage biodigesters, but to protect the public, utility workers and the equipment itself. Fiber optics are considered to be the most reliable, fastest method to shut down electric current and engines during emergencies, he said.

Though the cables are more expensive than radio transmitters, they require less maintenance and don’t face frequency issues. He said he was unaware of other Wisconsin utilities requiring fiber optics, but he noted that utilities work with different systems.

“I can understand that people want a lower cost operation, but will it be a reliable? Will it be safe? And will you be happy with it over the long haul?” he asked, explaining Alliant’s reasoning. “We’d like to see a lower cost, but we don’t make the fiber.”

Wisconsin Public Service Corporation, in contrast, does not require fiber optics on any of the 15 biodigesters in its territory, instead using radio links only on certain larger-scale projects, said WPS electrical engineer Matt Nelson, adding that WPS follows recommendations from the Institute of Electrical and Electronics Engineers.

“Radio has been successful for us. It is the most cost effective solution for the customer.  It does have its flaws, but for the most part we’ve been successful,” he said.

He said that because radio requires a line of sight for a proper connection, the company has occasionally had to install extra radio equipment in cases of tall hills or very long distances. And he didn’t rule out using fiber optics depending on the project.

“Fiber optics is a possibility­. We would use it if we had to,” he said.

Melissa Van Ornum, marketing manager for DVO Inc., one of the largest biodigester developers in the U.S., said that none of her company’s biodigesters in 17 states and 80 sites is connected to the power grid with fiber optic cables. The company uses alternatives such as radio transmissions, phone lines and the internet which can be installed at a fraction of the cost. They’ve had no safety issues so far, she said.

Wisconsin has begun reserving more incentives for biodigesters and other bioenergy and geothermal energy. A total of $7.5 million will be provided next year by Wisconsin’s Public Service Commission’s utility-funded Focus on Energy program. Some are calling for lower-cost interconnection options to encourage that growth.

Don Wichert, interim executive director of RENEW Wisconsin, said there are 35 farms using a total of 45 large-scale digesters in Wisconsin, but that number could grow faster were it not for the costs of fiber optics, which can add $250,000 to a $500,000 project. (RENEW Wisconsin is a member of RE-AMP, which publishes Midwest Energy News).

“It’s the difference between a project going ahead and a project being killed and we have a lot of projects that are stalled because of these extra costs,” he said.