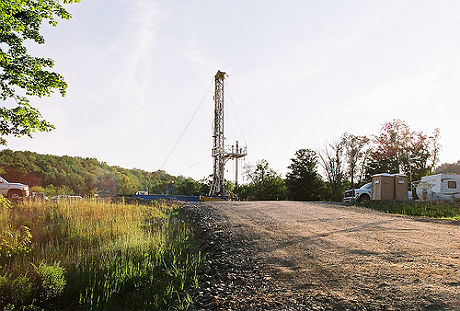 The debate over hydraulic fracturing regulation in Illinois will return to the front burner in coming weeks.

Fracking regulations will likely be discussed by state legislators either during a six-day veto session scheduled for Nov. 27-Dec. 6 or a short lame duck session in early January, if not both.

There is currently no significant fracking for oil or natural gas in Illinois, but over the past two years companies have acquired thousands of leases and laid the groundwork for exploration of the New Albany Shale in central and southern Illinois, thought to potentially be as lucrative as the Marcellus Shale.

A proposed state law that would specifically regulate hydraulic fracturing was a hot topic in the state capitol last year, as the state senate passed a bill that was supported by the industry but got a mixed response from environmental groups. On the last day of the session, legislators in the state House introduced amendments essentially turning the bill into a one- or two-year moratorium on fracking, allowing time to study the issue and develop more comprehensive regulations.

But even as the legislature has been out of session, environmental groups, industry interests and landowners have been busy meeting with legislators and trying to hash out regulations.

All sides agree that regulations should be in place before fracking in Illinois takes off, though they disagree on the content and scope. Sources said they expect the issue to be discussed informally during the upcoming veto session, with legislation possibly considered during a lame duck session.

Industry interests – including gas companies and land acquisition companies – want regulatory stability to help them make projections and attract financing. Environmental groups want protections from possible groundwater contamination and other impacts. Landowners want to be sure they get a fair deal on leases and that their property is not seriously harmed or devalued by fracking.

The different parties have been talking to each other, but sources on all sides say they are still not close to consensus on exactly what regulations should look like.

Len Kurfirst and Anthony Hopp are attorneys with the Chicago firm Edwards Wildman who represent insurance companies that insure oil and natural gas companies. Though they aren’t representing clients directly involved in fracking in Illinois, they are closely monitoring the legislative debate.

“Insurance companies want to make sure the companies are following best practices, as well as the investors,” Kurfirst said. “The last thing private equity wants is looking at a company ultimately opening itself up to a lot of unnecessary risk.”

Hopp noted that people on “both sides” are examining the outcomes of fracking in other states.

“The industry is taking advantage of best practices to craft the legislation, and opponents of fracking are using things that happened in other states as well,” he said. “There are questions like, who’s going to insure against the risk of earthquakes?

“Both sides are using the experience in Ohio and Pennsylvania and other places where fracking is going on to identify potential risks and address them proactively,”

Kurfirst said industry groups generally support strong regulations regarding proper casing construction and also baseline testing in order to see what compounds are already in the soil and groundwater – so fracking operations won’t be unfairly blamed for future findings.

“There have already been decades and decades of oil exploration there, so you have existing man-made contamination,” said Hopp.

But still a long way to go

Nick Magrisso, Midwest legislative director for the Natural Resources Defense Council, said that it appears unlikely that a mutually satisfactory bill will be passed in coming weeks, so the NRDC wants to see the moratorium bill passed to provide more time for study and negotiation before fracking permits are granted.

“We’re at the table with a broad set of stakeholders in Springfield talking about the issues,” Magrisso said. “I wish I had good news to report but we’re pretty far apart on a lot of issues.

“We’re at a critical juncture where we need to get it right. Until then the moratorium is no-brainer insurance against anything that could possibly go wrong.”

Magrisso’s recent blog post outlines specifics NRDC would like to see in comprehensive regulation. Magrisso said that industry interests might continue pushing legislators to pass a bill focused on chemical disclosure and lacking safeguards environmentalists see as crucial; but he doesn’t think such narrow legislation will pass.

“We know there is interest in doing something broader and more protective than what that bill did,” he said. “If that bill is introduced a second or third time, I have no reason to believe it would be a different result” than its previous failure.

The original bill, supported by industry, called for specific testing and reporting regarding well casings and other equipment and mandated disclosure of chemicals used, but offered exceptions for trade secrets. The first House amendment introduced May 31, the last day of the legislative session, turned the bill into a two-year moratorium, which was scaled back by another amendment to a one-year moratorium. From June to October, 17 more co-sponsors were added to the bill.

The NRDC would like to see the moratorium passed in its current form, though the timeline would need to be extended since the version they’d hoped to pass in spring 2012 called for a period of study ending in January 2013 and a moratorium through June 2013.

A 13-member task force described in the proposed moratorium legislation would study topics including water protection, the behavior of “land men” securing leases for gas companies, the public comment procedure for proposed fracking projects, the disposal of waste fluids, the disclosure of chemicals used in fracking, and the control of air emissions.

If a fracking regulation bill doesn’t pass in the January lame duck session, the process would need to start over in the next General Assembly. However most of the supportive legislators will retain their seats, so Magrisso still expects much political support for the measure.

Magrisso said that to the NRDC’s knowledge, the Illinois Department of Natural Resources (IDNR) has so far issued no permits for high volume horizontal hydraulic fracturing for natural gas, the technique typically known as fracking. But environmentalists and landowners are afraid permits could be issued at any time, and they feel that the permitting process is too opaque for them to adequately monitor.

Meanwhile, the NRDC is currently also laying the groundwork for an Illinois branch of its national Community Fracking Defense Project. NRDC Midwest advocacy director Tiffany Ingram said it is not yet clear how the project will function in Illinois, and that NRDC staff are meeting with community members in different states to tailor the project to different situations.

“We’re still in the development phase, but we think it’s an important aspect of the state work that’s occurring,” Ingram said.