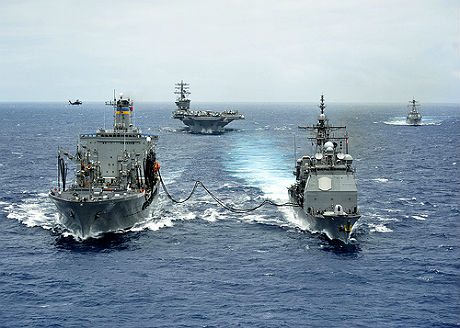 With the Senate poised to begin debate on the defense policy bill after the Thanksgiving recess, a coalition of senators is gearing up for battle against a pair of controversial amendments targeting the military’s biofuels program.

Opposition to the two amendments — one that would prevent the Defense Department from making operational purchases of alternative fuels that cost more than traditional petroleum and one that would block the Navy’s portion of an interagency plan to invest $510 million in building commercial-scale biofuel refineries — began with Sens. Mark Udall (D-Colo.), Jeanne Shaheen (D-N.H.) and Susan Collins (R-Maine) this spring. Now, according to a Democratic Senate aide, the core group opposing the amendments has grown to roughly a half a dozen senators.

They are looking to build a bipartisan coalition of opposition. In recent months, the biofuels industry, farm advocates and national security groups have been pitching undecided senators on the benefits of the military’s alternative fuels program.

But winning over Republicans will be no easy feat. Current Senate Armed Services Committee ranking member John McCain (R-Ariz.) has been vociferously opposed to the military’s biofuels spending and authored one of the contentious provisions. The other was penned by Sen. James Inhofe (R-Okla.), who will take over as ranking member on the committee next Congress.

Supporters of DOD’s alternative fuels program say they hope to handle the issue in a way that prevents it from coming up again.

“With the makeup next year, with the expanding [Democratic] margin in the Senate, the odds of getting something through — language that prohibits or impedes spending on alternative energy programs or alternative fuels — becomes harder next year,” the Democratic aide said. “Their effort is wisely invested this year, and if we can get a vote against it and send a strong enough signal, we think we won’t have to deal with it again.”

On Friday, 38 senators — 36 Democrats, a Republican and an independent — wrote to Majority Leader Harry Reid (D-Nev.) and Minority Leader Mitch McConnell (R-Ky.) urging that the defense authorization bill be brought to the floor swiftly but expressing their concern about the two biofuels amendments.

“Despite increased domestic production of traditional fossil fuels, rising global oil prices and market volatility caused DOD’s fuel bill to rise to more than $19 billion in Fiscal Year 2011,” the senators wrote. “Alternative fuels will not supplant fossil fuels entirely; however, replacing even a fraction of the fuel consumed by DOD with domestic alternative fuels, has the potential to advance U.S. national security, improve strategic flexibility, and insulate the defense budget against future spikes in the cost of fossil fuels.”

A separate, perennial military energy issue will likely not be dealt with as part of this debate, the aide said. Congress passed a ban on government purchases of alternative fuels with a larger greenhouse gas footprint than that of traditional petroleum as part of the 2007 Energy Independence and Security Act. Republicans have repeatedly sought to overturn that ban, especially as it relates to the Defense Department. The House-passed version of the defense policy bill included a provision to undo the ban, but a similar provision failed in committee in the Senate.

But, the aide said, because the ban crosses multiple committees and has been such a hot-button topic, many senators are opposed to dealing with it in the defense policy bill.