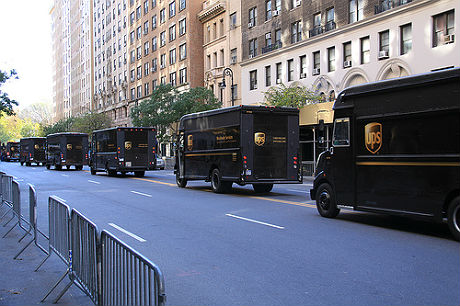 As the holiday shopping season kicks into full gear, some experts predict online businesses will rake in $2 billion in sales today, which retailers have dubbed “Cyber Monday.”

That also means thousands of gallons of fuel will be consumed in getting all those packages to customer’s doorsteps. The good news: there’s reasonable consensus that online shopping consumes less energy than physical retail, says Tim Smith, director of the NorthStar Initiative for Sustainable Enterprise at the Institute on the Environment.

A big reason is because those delivery trucks run much more efficient routes than we do driving to multiple stores in our own cars.

That said, Smith sees plenty of room for improvement, especially in suburban areas, as online shopping grows into what Forrester Research expects will be a $279 billion a year industry by 2015. UPS already has more than 95,000 vehicles that collectively put on 2.5 billion miles per year to keep up with the surge in online shopping.

The biggest opportunity is in the “last mile,” which accounts for up to half of a retail transaction’s carbon footprint. It’s relatively efficient to ship bulk goods by boat, train, or truck to local stores and warehouses. The largest source of emissions is in the final leg of the trip to the customer’s door.

Smith is co-author of a recent study with Kyo Suh of South Korea’s Seoul National University that shows how centralized pick-up kiosks and social networking might be used to significantly reduce the last mile’s fuel consumption problem.

The study looked at what happens to miles driven and carbon emissions when customers pick up packages at a kiosk on their way home from work instead of having them delivered to their doorsteps. The scenario became less hypothetical this summer when Amazon.com began introduced pick-up lockers in several cities, including Seattle, New York, and San Francisco.

The study assumes that the pick-up locations are in convenient locations that don’t require urban drivers to make large changes to their normal commute. That gets more difficult to do in less populated areas, though.

In suburban areas, the modeling showed that having people pick up packages on the way home from work actually increased miles driven by 27 percent over traditional doorstep delivery. Because more of those miles were driven in smaller vehicles, the emissions impact rose only slightly.

The doorstep vs. pick-up comparisons have been studied before. This study adds another layer to the pick-up model: what if, when it’s convenient, others could pick up the package for you?

“We ask our spouses all the time: ‘I’m on my way home. Do you want me to pick something up at the store?’,” says Smith.

Smith envisions a smartphone app, connected to a Facebook account, that would alert users when they were near a pick-up kiosk with a friend or neighbor’s package inside. If they were a trusted connection authorized by the package’s owner, they could pick it up and finish the delivery.

This social layer makes the system dramatically more efficient, even with only a very small participation rate. The study assumes that most people are going to be able to stop at a kiosk themselves without going too far out of their way.

With less than 5 percent of customers participating, a socially networked pickup system compared to doorstep delivery reduced miles driven by 93 percent in urban areas and 78 percent in suburban areas. Emissions fell 94 percent and 82 percent, respectively, in urban and surburban areas.

The pickup model might sound like an inconvenience to customers, but it would allow for faster delivery times and added security or convenience for people who aren’t home to receive packages when they’re delivered.

The fuel savings from social pickups would be significant enough that retailers or delivery companies might be able to reward people with payments for completing deliveries for their friends or neighbors.

Smith’s environmental management and strategy students will be pitching business ideas in class the next couple of weeks based around the opportunity.