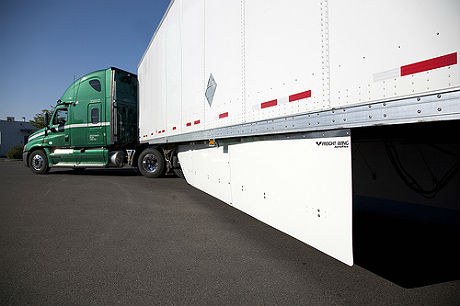 By adopting technologies that pay themselves off in less than two years, the road freight industry could deliver hefty emissions reductions and save thousands of dollars in fuel costs, according to a report released Tuesday by the Carbon War Room.

By adding a suite of seven efficiency technologies to its tractor-trailer fleet, the U.S. trucking sector could save 624 million tons of carbon dioxide by 2022, according to the report. The technologies would also achieve $22,400 in annual fuel savings per truck, which would see the upgrades paid off in 18 months.

“We found that there were a lot of low-hanging fruit in the sector: There were a lot of easy-win technologies that weren’t extremely expensive, but could make a huge difference in terms of reducing emissions and reducing — what we see as a problem — an overreliance on fossil fuels,” said Hilary McMahon, director of research at the Carbon War Room.

The report recommends five physical fuel-saving technologies, including aerodynamic upgrades, anti-idling devices, decreased rolling resistance with better tires, new transmission systems and adaptive cruise control. One of these technologies could provide between 3 and 15 percent in emissions reductions and fuel savings over a 10-year period, it says.

The trucking sector is also poised to see significant efficiency gains from a number of information communication technologies, or ICT, solutions. Logistics management programs that ensure trucks do not travel empty, ICT programs that monitor and improve driver behavior, and GPS devices that show traffic information and optimize routes can all reduce fuel use.

The report addresses technologies that could apply to a range of vehicles but focuses on Class 8 trucks, the heaviest among heavy-duty vehicles, which account for 75 percent of the fuel consumed by the U.S. road freight sector.

Heavy-duty commercial vehicles account for 4 percent of vehicles on U.S. roadways; however, they produce nearly 20 percent of the entire transportation sector’s emissions.

Owners vs. lessors — an incentive problem

According to the Carbon War Room report, “If [the transportation] sector enjoys growth as high as is predicted, the emissions from commercial trucking alone will jeopardize the world’s chance of meeting key climate stabilization targets.”

But technological solutions have been difficult to implement.

In the United States, the vast majority of trucking companies are small owner-operator ventures that lease out their fleets of one to 20 trucks. The owners, therefore, would pay for the efficiency upgrades, while their clients would be getting all of the fuel saving benefits. “You have an incentive problem,” said Tessa Lee, a research analyst with the Carbon War Room and an author of the report.

Even if the owner-operator is covering fuel costs and can see its savings, it is likely to have trouble getting financing for the upgrades. Banks do not want big-rig trucks as collateral, said Lee, so it is hard for owners to get loans for efficiency improvements, especially when the banks may not be convinced the new technologies will pay off.

Investing in top-of-the-line efficiency upgrades that help reduce carbon dioxide emissions can add $30,000 or more to the cost of a heavy-duty truck, the report says. That is in addition to earlier EPA regulations on nitrous oxide and particulate emissions that have already added an extra $25,000 to $30,000 to the cost of the vehicle, according to the American Trucking Associations. The base price for a new tractor-trailer today is around $120,000 to $130,000.

But a truck with all five of the Carbon War Room’s recommended physical retrofits could see the entire cost of the vehicle recovered in a decade.

The Carbon War Room sees its role in helping overcome the trust and information barrier so banks are confident in the returns, owner-operators can get the financing they need and larger fleet operators will be persuaded to make upfront investments on their own.

Making the right investments is paramount in an industry facing rising fuel prices, increasingly stringent regulations and heightened competition, said Ron Konezny, a general manager at Trimble, a technology company that supports the trucking industry and sponsored the report.

More targets and regulations ahead

EPA launched the SmartWay Partnership in 2004 to help U.S. trucking and rail companies adopt fuel-saving, low-carbon solutions. Since it began, the program has amassed nearly 3,000 partners that have benefited from $6.5 billion in fuel savings and reduced 23.6 million metric tons of carbon dioxide, according to the agency.

The SmartWay program “was really the petri dish for the development and deployment of different technologies that can save fuel and in turn reduce the carbon output of the trucking sector,” said Glen Kedzie, energy and environmental counsel at the American Trucking Associations.

Some technologies supported by the program are now considered compliance pathways in the new EPA and NHTSA greenhouse gas and fuel consumption regulations. Like the Carbon War Room report, the rule highlights the benefits of fuel-efficient tires, anti-idling devices and aerodynamics, but it also recommends speed reduction practices and the use of lightweight materials.

“As we march ahead, I think there’s going to be a lot of attention focused on even further aerodynamic improvements and the efficiency of the engines themselves — better oils and lubricants and getting away from a lot of these parts that create heat and friction, and trying to electrify some of the things under the hood,” Kedzie said.

He said he expects EPA and NHTSA will consider additional technology-forcing regulations in the 2021 or 2022 time frame. Meanwhile, existing federal targets are already pushing technology “to areas that in the past were considered unachievable targets to hit,” he said.