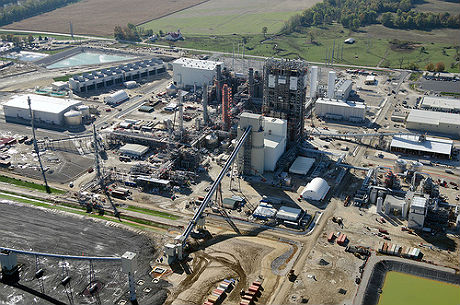 The Edwardsport IGCC plant under construction in October, 2011. (Photo via Duke Energy)

As the Indiana Utility Regulatory Commission considers whether to approve a proposed settlement clearing the way for Duke Energy’s nearly-complete 618 MW coal gasification plant in Edwardsport to move forward, opponents of the project continue to push back.

Environmental and citizens groups on Thursday released an opinion poll [PDF] and white paper [PDF] outlining the serious financial, management and ethical concerns that have plagued the project, and indicating a majority of ratepayers do not think they should absorb cost overruns for the approximately $3.55 billion project.

The Duke coal gasification plant has long been championed by Indiana Governor Mitch Daniels and other elected officials as a way to bolster the Indiana coal mining industry and provide “clean coal” power with cutting edge technology. Duke received state funding to research and test carbon capture and sequestration at the site.

The plant replaces a 160 MW coal-fired Duke Energy plant built in 1918 and retired in 2011. The company’s website says the new plant would be “one of the cleanest and most efficient coal-fired power plants in the world.”

The project has also been mired in controversy.

The paper by the Sierra Club and other groups details previously reported ethical scandals, including that Duke allegedly offered and gave jobs to state officials overseeing decisions on the Edwardsport project.

“In all, I wrote nearly 40 stories, exposing secret meetings, private conversations, unseemly friendships and disregard for ethics laws. The reporting has led to an FBI investigation, an ethics reprimand and an indictment against the former chairman of the IURC, in addition to the (four) firings and resignations. It has also led to a three-month-long government hearing, much of it behind closed doors, that has yet to settle the issue.”

On a media call Thursday, Sierra Club Beyond Coal Campaign deputy director Nachy Kanfer said there are three major problems with the proposed settlement for the Edwardsport project.

The commission’s decision is expected in December.

In April, Duke Energy, the Indiana Office of Utility Consumer Counselor (OUCC), Nucor Steel and a trade group representing six of Duke’s largest industrial customers proposed the settlement, wherein ratepayers would cover project costs up to a cap of $2.595 billion, while receiving some ratepayer protections and a $35 million contribution to the state low-income energy assistance program.

A press release from the OUCC indicates that the settlement relieves ratepayers of at least $700 million in costs that Duke might otherwise be able to recover from them under Indiana law.

“This agreement is the result of countless hours of hard-nosed negotiations with Duke Energy and other consumer parties…While this is an extremely complex case and has been very difficult to resolve, the agreement will require Duke Energy and its shareholders to pay for an appropriate share of the Edwardsport project, while putting an end to the cost overruns and making sure the project goes online for the benefit of Duke’s customers.”

The four other parties to the rate case – the Sierra Club, Citizens Action Coalition, Valley Watch and Save the Valley – are opposing the settlement. They say regulators should deny the proposed settlement and future attempts by Duke to recoup cost overruns from ratepayers.

If the commission approves the settlement, the four groups will have the right to appeal. Individual citizens can also email the OUCC with comments, Kanfer noted.

The Sierra Club and Valley Watch are members of RE-AMP, which also publishes Midwest Energy News.

Kanfer said the groups are suspicious about millions in legal fees the settlement obligates Duke Energy to pay the industrial trade group.

The Sierra Club commissioned a poll of 801 Duke ratepayers, conducted in mid-November by the Colorado-based firm Peak Campaigns. Only 28 percent of the respondents had heard about the Edwardsport plant, and half of the respondents did not even know there are coal-fired  power plants in Indiana (there are 31).

“There are a lot of ratepayers who don’t know about what’s going on,”  said Peak Campaigns pollster Mark Mehringer. “There’s that lack of knowledge, but the key is what’s going to happen as ratepayers hear about it.”

“The Sierra Club and the Citizens Action Coalition oppose all coal plants, so it’s not a surprise they designed a poll that produced the results they were looking for. I doubt that they informed the people they were polling that the Edwardsport plant will produce 10 times more power than the facility its replaces, but with significantly less environmental impact,” she said. “In fact, emissions of sulfur dioxide, nitrogen oxide and particulates combined will be 70 percent lower than the older, much smaller plant.

“Indiana hasn’t built a major coal-fired plant in more than two decades,” she added. “This facility is a key step in modernizing the state’s aging electric system, and complying with new, tougher federal environmental rules.”

A spokesperson for the Indiana Utility Regulatory Commission did not return calls for this story.

The future of coal in Indiana

Beyond the ethical and financial controversies, the larger significance of the Edwardsport plant is about the future of coal in Indiana.

Protogere said construction on the plant is complete, and the company is now in a start-up and testing phase.

“We’ve achieved some major milestones, including syngas production from coal on one of the plant’s gasifiers and electricity production using syngas,” she said. “We also operated both the combustion and steam turbines on natural gas and have been putting natural-gas fired power onto the grid for more than six months.”

They also say that since the economic crisis and plummeting demand for electricity, the Edwardsport plant is not necessary to meet consumer demand.

“This shows how desperate the coal industry is – it has failed economically and is no longer a low cost form of energy, so to get coal plants built you need to have a sympathetic governor who leans on regulators to overlook obvious problems with mismanagement and ethics,” Kanfer said. “It’s a symbol of the waning influence of the coal industry, largely because it’s been supplanted by cheaper energy resources including wind.”