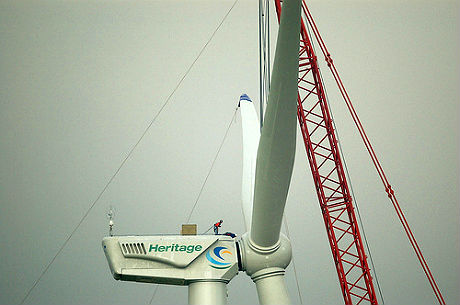 For Michigan clean energy advocates, Gov. Rick Snyder’s recent energy-policy address fell a bit short when it comes to where the state goes from here after voters rejected a constitutional amendment that would have strengthened the state’s renewable energy standard.

But, says Jim Dulzo of the Michigan Land Use Institute (MLUI), “Half a loaf is better than none.”

Michigan is on track to achieve 10 percent renewables by 2015 under current law set by Snyder’s predecessor, former Gov. Jennifer Granholm. The ballot measure, Proposal 3, would have raised that target to 25 percent by 2025.

Snyder, in an address delivered Wednesday from the Kellogg Biological Station in Hickory Corners — and during which he took questions via Google Hangout from audiences at NextEnergy in Detroit and MLUI in Traverse City — said he’s in favor of setting new goals for renewable energy as 2015 approaches, “but let’s set them together.”

That’s fine with Dulzo, since that is exactly what he and other renewable-energy advocates have been pushing for years.

Although, he added, “we have been talking about this rather loudly for the past six years or so.”

Dulzo said that even the day before the elections, polls had said that Michiganders were in favor of more-ambitious renewable standards. What was rejected, though, was the idea of enshrining those standards in the state constitution. Five out of six proposals in the election involved changing the constitution, and voters rejected them all.

“We’re convinced that Michigan’s citizens, generally speaking, think renewables are a really good idea and we need to keep moving forward,” Dulzo said. “We heard nothing in that vote that said, ‘let’s stop when we get to 2015.'”

The MLUI is a member of RE-AMP, which also publishes Midwest Energy News.

Dulzo said the MLUI and other renewable-energy advocates are mostly happy with Snyder, whom he said “gets it” when it comes to the need for reducing emissions. The problem, he says, is with the utilities, which spend millions of dollars to push against more-stringent standards.

“We’re eager to push forward with that conversation. We’re very relieved he wants to have it, largely because the utilities plainly told me last week when I interviewed them that they’re not interested,” Dulzo said. “They don’t even want to talk about this until the 2015 stuff is reached, met and analyzed and then discussed among themselves. And then they’re willing to start to move forward.

“We don’t view that as acceptable. That’s just not acceptable. You can’t just stop something and then talk about it, and then decide whether you’re going to go forward or not. This is too important for that.”

Dulzo recently looked at three other states — Minnesota, Illinois and Colorado — all of which have instituted at 25 percent mandate or higher. He said he talked to state regulators and utility officials in all three states and “could find nothing about too fast of a buildup or grid-can’t-handle-it or pushing prices up too quickly,” Dulzo said.

“We found out quite the opposite, that they’re figuring out how to do it, the technical problems are very, very solvable, have actually led to them better understanding, particularly when it comes to wind power, how to integrate it into the grid.”

‘We can do better’

However, it was not only the utilities that opposed Proposal 3. The Traverse City Area Chamber of Commerce was among many business groups statewide to come out against it. Doug Luciani, the chamber’s president and CEO, said that while his organization supports higher renewable energy standards, the state needs to bring various stakeholders together, including power companies, business groups, consumers and others to measure where we are in implementing Michigan’s current 10 percent renewable energy mandate by 2015.

“We can do better, and we should do better,” Luciani said. “But we need to know where we are in achieving the renewable energy standards we have now, and then determine what’s realistic going forward.”

Luciani also called on the federal government to provide more direction on renewable energy policy, so states aren’t creating a patchwork of renewable standards that businesses could find difficult to navigate.

From Dulzo’s point of view, though, the state already has the will and the know-how to move forward. And, he said, the state has the manufacturing and technical expertise to make the necessary wind turbines and solar panels locally. “Michigan is so ready to be a global leader in renewables technology, R&D, and manufacturing,” Dulzo said.

“We should be at the head of that just like we were for cars, just like we were the arsenal of democracy during World War II,” he said. “Michigan’s ready. It’s just getting the political will lined up correctly.”

In his talk, Snyder singled out a program run, in part, by MLUI called TC Saves, which provides homeowners a chance to cut their energy bills through weatheriation and zero-percent financing on major efficiency improvements. Last spring, Snyder visited one of the Traverse City homes remodeled under the program and praised the public-private partnership that made it happen.

Dulzo said the program works well at the local level, and is one of many similar pilot programs going on across the state and the country, but to implement on a national scale will take a bigger commitment by government.

The bottom line for the MLUI, Dulzo said, is that, despite the rejection of the constitutional amendment and pushback by the utilities, there is still a will from the governor on down to push even further into renewables beyond 2015. The desire is there and so is the technology, he said.

“I think the problem is almost entirely one of political will and the ability of the utilities to control the conversation so effectively, which they’re really good at.”