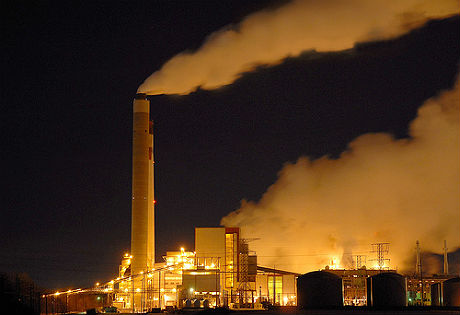 INDIANAPOLIS — Are the costs of relying on coal-fired power too steep for central Indiana ratepayers to bear?

That’s what a coalition of environmental, ratepayer and religious groups maintained at a recent protest in downtown Indianapolis, directly across from the corporate headquarters of Indianapolis Power & Light (IPL), the utility that serves central Indiana.

In September IPL filed with the Indiana Utility Regulatory Commission [PDF] to recover $606 million in investments in pollution controls.

At the Wednesday rally, about 30 demonstrators wore T-shirts with the Sierra Club’s “Beyond Coal” logo, and chanted slogans on the steps of the Soldiers and Sailors Monument in downtown Indianapolis. They demanded the utility shut down two aging coal plants, particularly the controversial Harding Street plant, which was opened in 1954 and sits seven miles southwest—and often upwind—from downtown Indianapolis.

Then the groups delivered a petition with more than 2,000 signatures opposing those planned rate increases and asking IPL to invest instead in energy efficiency and renewable energy.

The purpose was “to send the message to IPL that ratepayers are not satisfied with multimillion dollar upgrades to aging coal plants,” said Megan Anderson of the Sierra Club, who organized the event. The event also marked the launch of the Indianapolis chapter of the Sierra Club’s Beyond Coal campaign, which advocates nationwide to retire aging coal plants and prevent new ones from being built.

Burning all that coal has proved costly to central Indiana residents, Olson and other critics maintained. In addition to the $606 million recently requested, IURC awarded IPL $615 million from ratepayers from 2003 to 2011, Olson said.

Those numbers also don’t include the millions the utility may have to spend to make their aging coal plants comply with forthcoming federal regulations on coal ash and power plant water intake, as well as future carbon dioxide emissions, Olson said.

That said, in July IPL put out a request for proposals for an $800 million combined cycle gas power plant that would be built near Martinsville, Indiana, southeast of Indianapolis, continuing the utility’s commitment to fossil fuels, Olson said.

IPL has not yet decided whether to build the new plant, purchase electricity generated by others, or rely more on existing generation, said Greg Fennig, the company’s vice president of community relations.

But if the gas plant and the coal plant upgrades move forward, the total bill to ratepayers for fossil fuels will exceed $2 billion, Olson said. Meanwhile, IPL will have spent $62 million on energy efficiency for the three-year period ending in 2013, Olson said.

With the price of burning coal rising, it’s no coincidence that the total electricity bills Indianapolis-area ratepayers pay have increased 44 percent over the last 10 years, Olson said. That’s because under Indiana law, ratepayers foot the bill for construction projects and upgrades approved by IURC, and in addition, they pay rates high enough to allow the utility to recover costs and net 10 percent profit on top of those costs.

Balancing cost and the environment

“We’re proud of our track record of balancing the impact on the environment and the impact on customers,” Fennig said in a statement. All plans to upgrade generating plants “are justified by the IURC, and those plans must be economic and in the public’s best interest.”

What’s more, the utility must rely on coal and gas as the best sources for “highly reliable base load generation,” Fennig added. “Additionally, we must balance the impact on cost. IPL’s base load generation, including fuel and future environmental expenses, will still cost about half as much as wind and one-third [as much as] solar generation.”

Fennig also noted that seven percent of the electricity IPL delivers, or 300 MW, comes from wind, obtained via long-term contracts.

Fennig said IPL was spending $30 million on energy efficiency programs that allow the utility to audit 20,000 homes, and providing incentives on low-cost lighting, high-efficiency air conditioning, and that they work with customers to install their own small-scale renewable energy.

IPL is “now one of the top 20 utilities in the nation for wind energy and would likely be the leader in the Midwest related to solar, assuming all of the projects in our systems interconnection queue are completed by their developers,” Fennig said.

IPL, however, did not address Olson’s central criticism that Indiana utility law creates a sweetheart deal for utilities operating coal-fired power plants, and a conflict of interest between profit for investors from expensive coal plants and scaled up investments in efficiency and renewables.

As for how much utility bills had increased for IPL’s customers over the last decade, Fennig said only, “I don’t know where they got those numbers.” However, the annual rate increase going forward will be 2-3 percent per year, he said.

Coal-fired electricity from IPL has proven costly in ways that don’t show up on utility balance sheets, other speakers at last week’s rally said. In his remarks, Gabriel Filippelli, the director of the Center for Urban Health at Indiana University-Purdue University, Indianapolis, described a study he led on mercury contamination of soil via air pollution from IPL’s Harding Street Station.

In soils downwind of the power plant, Filippelli and a colleague found mercury levels up to 30 times the background level, they reported in 2011 in Water, Soil & Air Pollution, a peer-reviewed journal. Since wind in central Indiana typically blows from southwest to northeast, that meant it was blowing mercury, a known neurotoxin that affects childhood brain development, toward downtown Indianapolis.

“The mercury washes into waterways, makes its way into fish, and makes fish poisonous,” Filippelli said. And in Indianapolis, “the plume of mercury was from one cluster of sources—IPL’s coal-burning plants just southwest of downtown,” he said, referring to the Harding Street plant.

Air pollution from IPL’s coal plants is already harming the health of Indianapolis residents, the speakers said. At the press conference, Niesha McKinley, an employee of Citizens Action Coalition who lives in Indianapolis, held up a picture of her young son, who has asthma that she said is aggravated by pollution from the plant. She worries about his asthma getting in the way of his ability to play sports, she said. “Every day IPL’s plant operates is another day my child is exposed to toxic air pollution.”

Fennig, of IPL, said the utility has made great progress in cleaning up the air pollution from Harding Street. “Since 2000, we’ve reduced sulfur dioxide by 85 percent and nitrogen oxide by 73 percent. And in compliance with the EPA’s new mercury air pollution rules, which were issued in December 2011, they’ll reduce 90 percent of the mercury from the Harding Street plant by 2016, Fennig said.

None of IPL’s moves to clean up its coal plants reassured Anderson or the other speakers. Following the rally, they chanted slogans in front of the IPL’s headquarters, and Anderson presented to IPL CEO Ken Zagzebski a petition with 2,000 signatures opposing rate increases to finance upgrades to IPL’s aging coal fleet.

Before they did, however, the Rev. T. Wyatt Watkins, a representative of Hoosier Interfaith Power & Light, a local religious group pushing for clean energy, spoke up about another cost that the company was not addressing–the urgent need to address climate change by reducing carbon emissions.

Rev. Watkins told of watching the movie “Miracle on 34th Street” with his young son, who was shocked to see one character blowing smoke into the face of another. We learned that smoking was hazardous, Watkins said, and we have learned that coal plants, particularly older ones like the Harding Street plant, which opened in 1954, are hazardous as well.