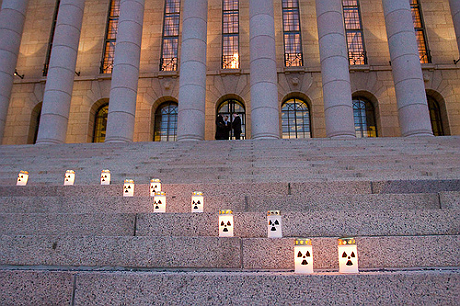 An anti-nuclear demonstration in Finland. (Photo by Greenpeace via Creative Commons)

Exactly 70 years later, on an unseasonably warm Sunday afternoon, activists, engineers, doctors and scientists from across the U.S., Canada, Germany and Japan gathered around Henry Moore’s abstract “Nuclear Energy” sculpture on the University of Chicago campus.

Oglala Sioux tribal member Charmaine White Face sang and prayed about the harm nuclear power and nuclear weapons have wrought on Native Americans. Local Buddhists chanted and drummed as people placed sticks of incense around the sculpture, an abstract form which could evoke a skull or a mushroom cloud.

It has been more than two decades since the era when Americans regularly chained themselves to nuclear reactors, went to jail and marched by the tens of thousands to oppose nuclear power. With the Cold War long over, nuclear weapons are largely decoupled from nuclear energy in the American consciousness, and with climate change posing a dire global security threat, nuclear power is seen as a relatively clean, viable energy source by many today — including President Barack Obama.

But the gathering at the University of Chicago showed that there is still a vibrant if scaled down anti-nuclear movement, including activists – disproportionately with graying hair — industry whistleblowers and clean energy experts who say nuclear simply doesn’t fit in with an energy future based on renewables and more distributed generation.

While they still highlight the horrors of nuclear accidents – an angle pushed to the forefront by the 2011 Fukushima Daiichi disaster – and the link between weapons and energy, they also say nuclear energy is inefficient, extremely expensive and logistically unsuited to our modern energy landscape.

Speakers at the two-day conference at the University of Chicago stressed that nuclear power is inefficient compared to coal and natural gas, and that huge construction and indemnification expenses for nuclear plants make them unworkable especially in a time of low energy demand. The conference was organized by the Nuclear Energy Information Service, which opposes nuclear power and weapons.

There have been no new nuclear plants built in the U.S. in the last few decades, but there are several new nuclear plants proposed or in the works in the south, including in Georgia and South Carolina. President Obama has repeatedly voiced support for nuclear power as part of a “clean” energy mix, and his administration recently-announced investment in developing small modular reactors.

While there is relatively little public alarm about nuclear weapons in the U.S. these days, speakers at the Chicago conference argued that nuclear power generation anywhere in the world potentially increases the threat. Spent reactor rods can be reprocessed to extract weapons-grade plutonium, and equipment used to enrich uranium for reactors can also be used for weapons.

“The inextricable connection between weapons and power is a well-documented history, largely without accountability, largely without liability,” said Paul Gunter, director of the research oversight project for the Maryland-based group Beyond Nuclear.

Conference speakers described President Dwight D. Eisenhower’s call to harness “atoms for peace” as nuclear energy – including in a 1953 speech to the United Nations — as political cover for a continuing investment in nuclear weapons. They noted that the American nuclear arsenal mushroomed during Eisenhower’s presidency.

“Peaceful nuclear technology is a myth – it’s something that has been fabricated to put a happy face on the atom,” said Kendra Ulrich, the nuclear campaigner for Friends of the Earth.

“Atoms for Peace told us international prosperity could be achieved through sharing of peaceful nuclear technology,” she said. “Today we’re being told it’s the solution to global warming, that it’s the path to U.S. energy independence. That’s also a lie – we are sourcing most of our uranium today from other countries, it is a finite resource and it won’t last forever.”

Speakers also noted that in the U.S., Native Americans have borne the brunt of devastating health problems and other impacts from the nuclear industry in terms of both weapons and power.

White Face described high incidences of cancer and other health problems on the Oglala Sioux Reservation, including around her South Dakota home, because of historic uranium mining and milling. The region is still dotted with unremediated abandoned uranium mines that provided fodder for both weapons and reactors in decades past. Native Americans were also disproportionately impacted by nuclear weapons testing in the American west in the 1950s.

At the conference, Native American activist Robert Chavez lamented that Native Americans in New Mexico live in the shadow of the Los Alamos National Laboratory which maintains nuclear weapons; and near the Waste Isolation Pilot Project (WIPP) in Carlsbad that already stores military nuclear waste deep underground and is proposed as a long-term storage site for reactor waste.

Engineer Arnie Gunderson had worked as a nuclear plant operator and became senior vice president of Nuclear Energy Services, a Connecticut consulting firm. He grew concerned about unaddressed safety violations he observed in the course of his work and in 1990 became an industry whistleblower, airing his concerns to the Nuclear Regulatory Commission and later testifying before Congress with the backing of Ohio Sen. John Glenn.

Now he and his wife run the non-profit Fairewinds Energy Education Corp., which raises awareness of nuclear and other energy issues. He said that five things which were troubling in the early days of the nuclear industry have not changed: “Secrecy, subsidies, waste heat, decay heat, and the piles of waste.”

Decay heat refers to the fact that nuclear reactor waste continues to emit heat for years as it breaks down, necessitating ongoing cooling and creating long-term risks.

Waste heat highlights the inefficiencies of nuclear power, which Gunderson said turns about 33 percent of the available energy into actual electricity. Coal plants hover around 40 to 42 percent, he said, and modern natural gas-fired plants are even more efficient than that.

“Nuclear power is like cutting butter with a chain saw,” said Gunter.

Gunderson said he’s observed first-hand a cozy relationship between federal regulators and companies that run nuclear plants, and he thinks such “secretive” relationships have translated to government support for nuclear energy that would be more wisely focused on renewables and energy efficiency.

“What we’re seeing is that the cost of solar is plummeting while nuclear is rising,” he said. Skeptics note that the sun “doesn’t shine day and night,” he continued. “But if you believe man can build a repository to store nuclear waste for a quarter-million years, surely those same people can find a way to store electricity [from solar panels] overnight.”

Dr. Arjun Makhijani is an engineer specializing in nuclear energy, president of the Institute for Energy and Environmental Research and author of books on carbon-free and nuclear-free technology. He said that nuclear energy is incompatible with a shift to more renewables and distributed generation, since nuclear plants provide a massive source of baseload power that — unlike natural gas plants — cannot easily be scaled up or down to respond to changes in demand or the fluctuations of wind or solar power on the grid.

“We’re not lacking low-carbon sources of energy – we’re lacking time and money” to develop such sources, said Makhijani. “And nuclear is bad on both fronts. There is not going to be a nuclear renaissance — fortunately, I believe. Cost is at the center of it.”

“All a nuclear reactor does is boil water – it doesn’t do anything high-tech,” said Makhijani. “You can boil a lot of water in one tank with not much uranium, but we’re still making plutonium just to boil water. If that is the limit of our technological innovation, we have to call on extraterrestrial powers to help us.”

Makhijani added that while nuclear power is often touted as a reliable baseload source, it runs the “risk going from 24/7 to 0/365.”

“It’s a technology that for a host of reasons can go, overnight, in an unpredictable way,” he explained, as one serious accident like Fukushima might mean reactors shut down all over the country or even the world. “That won’t happen to a natural gas plant or solar. We had a wind turbine blade blow off in the Midwest last year, and that was it – 1.5 megawatts were gone, but we didn’t say we’re worried we’re going to have wind turbine blades raining down on us, so shut them all down. That happens with nuclear.”

Nuclear critics point to FirstEnergy Corp.’s Davis-Besse nuclear power plant in Ohio as an example of how many things can go wrong. The plant is seeking permission from the Nuclear Regulatory Commission to extend its operating license through 2037. Its license, issued in 1977, is otherwise scheduled to expire in 2017.

The plant has suffered six “significant accident sequence precursors,” out of a total of 34 such events reported nationwide, according to Beyond Nuclear. The problems include being hit by a tornado in 1998 and suffering a “hole in the head” – acid corrosion in the reactor lid – in 2002. The reactor was also taken offline temporarily in 2010 because the new reactor head was showing signs of premature aging.

Even if nuclear power were phased out or greatly reduced in the U.S., the country still has a massive amount of spent fuel and other radioactive waste that must be stored and will remain potentially harmful for thousands of years. (The half-life of plutonium-239, used for both nuclear weapons and nuclear power, is 24,000 years).

The federal government is still debating storage options for the spent fuel from nuclear power plants since the cancellation of plans for a permanent repository at Yucca Mountain in Nevada. Currently, radioactive waste is stored in pools on-site at the country’s 104 operating reactors, which provide about a fifth of the country’s electricity.

Moving waste off-site naturally involves transport by truck, rail and/or barge, which also entails risk. The Environmental Impact Statement for the Yucca Mountain repository included the possibility of up to 453 barge voyages carrying waste from nuclear reactors on the Great Lakes, including trips along the east and west coasts of Lake Michigan to connect with rail lines at the ports of Milwaukee and Muskegon.

“You don’t clean up radioactive materials, you move them around, you concentrate them and store them,” said Bob Alvarez, a senior scholar for the Institute for Policy Studies and a former adviser to the U.S. Secretary of Energy. “There’s no silver bullet.”