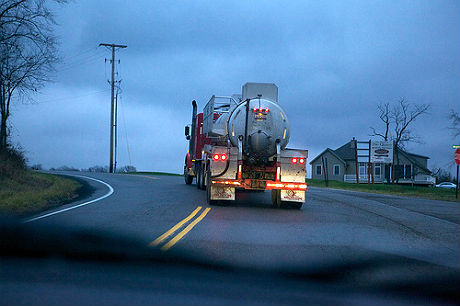 A truck hauls water to a drilling operation in rural Ohio in 2011. (Photo by Susy Morris via Creative Commons)

Or what if gas-laden wastewater explodes, destroying an on-site impoundment  and drenching onlookers with the chemical-laden water?

Accidents like these have happened before, and they can expose people to fracking fluid or wastewater, which holds a cocktail of potentially hazardous chemicals.

Would doctors treating the accident victims know what they’d been exposed to?

Under a 2012 Ohio fracking law, maybe not, says Melissa English, development director of Ohio Citizen Action, a Columbus-based ratepayer and environmental advocacy group (and a member of RE-AMP, which publishes Midwest Energy News).

English is among a group of environmentalists and health professionals who say the law makes it nearly impossible for doctors, nurses and emergency medical technicians to get the chemical information they need in time to protect patients. They also say it imposes what amounts to a gag order on doctors who do receive this information, preventing them from telling other doctors the identity of the chemicals.

But supporters of the new law, including oil and gas industry groups, the American Legislative Exchange Council (ALEC), a corporate-funded group that lobbies state legislatures, and the Ohio State Medical Association maintain that the bill allows doctors who need to know to find out which fracking chemicals their patients have been exposed to.

That claim doesn’t wash with some Ohio legislators, including two who have introduced bills in Ohio’s House and Senate, respectively, to overturn the medical secrecy provisions of the current law.

The tussle has arisen as states like Ohio try to balance gas companies’ need to protect their trade secrets with the public’s right to know the chemicals they could accidentally be exposed to. The challenge is particularly acute for emergency responders, nurses and doctors who need this information quickly.

As far as English is concerned, it’s clear where that balance should lie.

“There’s no question that public health should take precedence over trade secrets,” she said.

To obtain natural gas in a fracking operation, drillers inject about five million gallons of fluid into the ground. Ninety-nine percent of that is water, but 1 percent—about six tanker trucks worth—are chemicals, said Bernard Goldstein, a toxicologist and professor emeritus of environmental and occupational health at the University of Pittsburgh.

What’s more, two to three million gallons of fluid comes back up to the surface, carrying potentially hazardous substances such as sulfur, bromine, and arsenic.

The industry argues that the quantities of these chemicals are small enough to be harmless, but the science on the matter is still not conclusive. Researchers haven’t documented fracking-related health issues because “there’s been almost no support for research” on the issue, Goldstein said.

“I don’t know whether there are adverse health effects caused by fracking chemicals,” Goldstein said. “I do know there are a lot of people who believe they are sick because of this.”

The work built on earlier studies that have documented that people who inhale petroleum hydrocarbons at work and those who live near oil refineries face a higher risk of eye irritation, headaches, asthma symptoms, and at least three types of blood cancers. These effects are due to chemicals such as benzene, xylene and alkanes.

Both fracking fluid and the flowback liquid contain such chemicals. Many of them evaporate easily and spread through the air.

To find out if fracking chemicals in the air could cause health problems, John Adgate and his colleagues at the University of Colorado School of Public Health studied 24 fracking sites, trapping and analyzing the air in a perimeter around each. They did this while frackers were forcing millions of gallons of fracking fluid into the ground, then collecting the millions of gallons of natural gas-containing fluid that flowed back up.

They determined that people living within half a mile of the fracking sites would face a slightly elevated lifetime cancer risk from inhaling benzene and its chemical cousins. Nearby residents would also face an elevated risk of neurological problems, mostly from breathing chemicals such as trimethyl benzenes and xylene, the Colorado team reported in May in the peer-reviewed journal Science of the Total Environment. (Health risks were not elevated for those living more than half a mile from fracking sites.)

Adgate writes that more research is needed on the effects of air pollution near fracking sites, and ways are needed to protect people from harm.

In December 2011, ALEC adopted model legislation based on a Texas law that allows energy companies to withhold the identity of chemicals in fracking fluid that they deem trade secrets, the New York Times reported last April. The bill was sponsored within ALEC by ExxonMobil, which is “one of the largest practitioners of fracking,” the Times noted.

Ohio’s Senate Bill 315 closely resembles the ALEC model legislation. According to a piece by a Greenpeace staffer posted on Ecowatch, 33 of 45 Ohio legislators who cosponsored SB 315 were ALEC members.

And according to an ALEC blog post, the model legislation was introduced in Pennsylvania, Ohio, Indiana, Illinois, and New York. ProPublica noted that the bills introduced vary somewhat by state.

SB 315 was a massive budget bill that sped through the Ohio House in two weeks last May, a fact that several legislators criticized, said Richard Sahli, a former Ohio assistant attorney general and former chief counsel of the Ohio EPA. In such a bill “all kinds of stuff gets hidden,” said Sahli, also litigates for environmental groups.

What was hidden were provisions that overturned decades of precedent in Ohio with regard to how state agencies regulated disclosure of potentially hazardous chemicals that companies wanted to protect as trade secrets, said English, of Ohio Citizen Action.

“When we saw the disclosure position in Senate Bill 315, it became apparent that oil and gas was trying to carve out exemption from disclosure provisions that other industries needed to observe,” English said.

For years, Ohio had followed the lead of the U.S. EPA in how it handled trade secrets, Sahli said. A company submitted information to the regulatory agency. It had to apply to the agency, saying it believes that the identity of a chemical was a trade secret. Then it had to substantiate that claim.

If the agency agreed, it kept the identity of the chemical to itself, kept it off public web pages, and shared it only to those who needed to know.

Under the new Ohio law, an oil or gas company “unilaterally determines” whether a chemical is a trade secret. If they claim it’s a trade secret, they don’t have to disclose its identity to the Ohio DNR.

A reporter or member of the public can request the identity of a chemical through a public records request, but if the request is denied due to trade secrets exemptions in public records law, the only option left would be for the requester to take the agency to court—a prohibitively expensive option for most people. What’s more, under the new law, that person would have to prove in court that they were adversely affected by the chemical.

Ohio officials take a decidedly different view. Jim Zehringer, director of the ODNR, said in a statement that the law established “one of the nation’s toughest regulatory frameworks,” and that “we will safeguard our people and environment…with strong and clear rules for conducting business in Ohio.”

Sahli, in contrast, calls the law “supremely pro-industry.” Nor is it an accident that laws like Ohio’s are going in state by state, he said. In 2005, then-vice president Dick Cheney successfully urged Congress to strip the U.S. EPA from authority to regulate fracking operations. Environmentalists call this provision the “Halliburton loophole.”

That left regulation to the states. “And the states are putty in industry lobbyists’ hands,” Sahli maintained.

SB 315 does exempt medical professionals from some of the secrecy requirements, and they would have an easier time obtaining that information, at least on paper.

The law includes “some of the strictest requirements in the nation,” said John Krohn, a spokesperson for Energy in Depth, a gas industry trade group. The law exceeds the requirements of a Colorado disclosure law “that has been praised by environmental groups like Earthjustice,” Krohn said.

Specifically, the law does not prohibit doctors, nurses or emergency medical technicians from learning the identity of all the chemicals in fracking fluid if they need that information to treat patients, he said.

As for what critics call the law’s gag order, Krohn acknowledged it’s a point of contention, and said that the purpose was to ensure medical professional don’t accidentally or intentionally share a particular additive or formula, which would put one gas company at a competitive disadvantage over another.

“I think it’s a little disingenuous to say that provision that solely seeks to keep people from sharing that information with parties that shouldn’t be privileged to it puts in place a gag order that keeps medical professionals from doing the job they’re required to do,” Krohn said.

In a November 1 letter to Ohio Senator Thomas Niehaus, president of the Ohio Senate, an OSMA representative wrote that the language in SB 315 “makes it very clear that the confidentiality provision in no way precludes a medical professional from making any reports to public health or governmental officials that are required by law or by a physician’s professional ethical standards,” Tim Magleone, director of government relations for the group, wrote. In addition, “the OSMA does not believe that SB 315 places a ‘gag order’ on physicians.”

But Cowden said the OSMA made a mistake because it doesn’t understand enough about the fracking process. The law talks about chemicals used in “production.” But in industry parlance, the term “production” does not include set-up of the drilling site, injection of fracking fluid, or recovery of the millions of gas-laden fluid that flows back.

“That’s when the bulk of the contaminants come out,” she said.

In other words, the companies don’t have to post information on chemicals used until after the drilling is completed.

Cowden and other Ohio doctors are pushing back. They’re trying to fix the law to protect patients from health problems—and themselves from worries about legal confrontations with industry over chemical secrecy.

Since SB 315 passed, 371 Ohio medical professionals signed a petition circulated by Ohio Citizen Action that said that problems with the new fracking law “make it nearly impossible for us to get crucial information about toxic chemicals used in oil and gas drilling.” And they “prevent us from protecting public health by prohibiting the disclosure of this information.”

These doctors, along with a persistent campaign by Ohio Citizen Action, kept the issue alive, and in September, state Sen. Michael Skindell and Rep. Bob Hagan, both Democrats, introduced bills in their respective chambers to remove the medical secrecy provisions in SB 315.

If the legislation passes the bill and it’s signed into law by Kasich, companies would once again have to reveal the identity of all chemicals used in fracking fluid for individual wells, including those they say are trade secrets, to the ODNR, which would keep them in a database. The law would place the burden of proof on companies to defend their  their request to the agency that a chemical’s identity be protected. ODNR, rather than companies, would decide which chemicals are protected.

Although Skindell’s and Hagan’s bills have been introduced, English, of Ohio Citizen Action, does not expect the legislature to take them up in the lame duck session, which ends next week, she said. But for the legislative session that begins in January, she said, “we’re gearing up for a full-court press.”