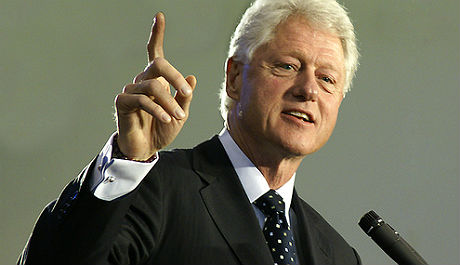 An increasingly vocal proponent of clean energy, former President Bill Clinton will speak in Chicago Wednesday to celebrate the growth of wind power in the Midwest.

The event will be hosted by Wind on the Wires, a St. Paul-based non-profit organization founded in 2001 with the aim of creating a “road to market” for wind energy, including improvements to make the grid more conducive to wind and other renewables.

In recent years, Clinton, like his former vice president Al Gore, has become an outspoken champion of renewable energy and specifically wind power.  Wind on the Wires executive director Beth Soholt said Clinton is playing an important role in translating complicated and technical issues for the general public, and also in helping to correct misinformation that has spread as wind power has become more prevalent and a more viable alternative to fossil fuels.

“He will be able to put a fine point on a lot of these important messages,” said Soholt. “We spend a lot of time on education and outreach to all different kinds of people – it could be a land owner, a government official or anyone in between. (Clinton) is able to communicate in a way that’s elegant and concrete and has a sense of urgency.”

Wind advocates see Clinton as a particularly powerful and relevant spokesman given his record of leveraging private investment to tackle serious public issues, and his ability to enunciate the business case for renewable energy.

Soholt cited Wisconsin manufacturer SC Johnson as an example of the private sector embracing renewables for financial and ethical reasons. Two 415-foot-tall wind turbines are under construction at an SC Johnson facility near Racine.

“We’re showing there are reasons to do this beyond meeting current law,” said Soholt. “When we got started about 11 years ago, we had a couple hundred megawatts in the ground. Now, MISO‘s (the Midwest Independent Transmission System Operator) footprint includes more than 12,000 MW of installed wind power.”

As president, Clinton extended tax credits for wind and biomass energy; increased energy efficiency standards for home appliances and ordered federal buildings to cut energy use by 35 percent, among other things. He also backed the idea of a domestic greenhouse gas emissions trading system.

The Kyoto Protocol was negotiated during Clinton’s presidency, with Gore’s help, though it was never ratified and President George W. Bush later renounced it. At a United Nations climate conference in Washington in 2009, Clinton criticized Bush for his lack of action on the protocol and said: “There’s no longer any serious doubt that climate change is real, accelerating and caused by human activities.”

Since re-entering civilian life, Clinton has attended various events specifically to advocate for clean energy and energy efficiency while also integrating that message into his speeches on broader topics. He’s called for extending the federal Production Tax Credit for wind, which many industry and clean energy proponents see as crucial to the future health of wind power. Without governmental action, it is set to expire at the end of December.

On Dec. 4 Clinton made a surprise appearance in Denver at the 30th anniversary of International Development Enterprises, where he touted renewable energy as a way to alleviate poverty in developing countries like Haiti, where he said distributed solar generation could help farmers and other impoverished people avoid high electricity rates and lack of grid access.

In 2011, Clinton called for more renewables during an appearance on “The Daily Show.” He said that solar and wind would be cost-competitive with coal and nuclear within several years, especially considering externalities like health impacts from coal power.

‘Think about the tattoos’

Clinton expounded on the economic and environmental benefits of renewable power at the Clean Energy Summit in Las Vegas in August, highlighting the 392 MW Ivanpah thermal solar generating facility in California and the energy efficiency retrofit of the Empire State Building. He indicated he has faith in climate/ clean energy legislation passing in the coming Congress, and he emphasized the job creation potential of clean energy.

He added that the workers he met on the Ivanpah project were a diverse bunch with a penchant for body art.

“Think about the tattoos,” he said, as reported by Think Progress. “You win the tattoo vote, we’ll have the damnedest environmental policy you ever saw.”

In September Clinton was at the Solar Power International 2012 conference in Orlando, where he referenced the job creation and environmental achievements of Germany’s aggressive solar energy program and lamented that Democrats didn’t better explain the facts behind the Solyndra controversy – including by pointing out historical government support for fossil fuels.

“We’ve been giving oil subsidies since 1916,” he said. “Sometimes we dig a dry well, but they persevere. You’ve got to take chances if you are going for tomorrow’s dance.”

Leading up to the November elections Clinton backed Proposal 3 in Michigan, which would have significantly increased the state’s renewable energy portfolio standard, to 25 percent renewables by 2025. (The measure failed, with only 36 percent of voters in favor.)

He also touted wind power during a campaign appearance in Sioux City, Iowa for Congressional candidate Christie Vilsack – wife of U.S. Agriculture Secretary Tom Vilsack. (She ultimately was defeated by Republican Steve King.) He’s also been an outspoken proponent of energy efficiency as the “cleanest” form of energy.  In 2010, for example, he attended an event celebrating the first gold LEED-certified building in Las Vegas.

Climate change is a focus area for the William Jefferson Clinton Foundation both in the US and the developing world. The foundation’s energy- and climate-related projects include planting trees to sequester carbon in Malawi, helping Guyana develop renewable energy sources, promoting low-carbon public transit globally and  partnering with the AFL-CIO to leverage union pension funds to finance sweeping energy efficiency improvements. (So far, the AFL-CIO program has facilitated retrofits on over 3,000 affordable housing units in New York, Illinois, Ohio, Missouri and Minnesota.)

Soholt said she hopes Clinton will discuss messages from his international work, in both the developing world and Europe, during the Chicago event Wednesday.