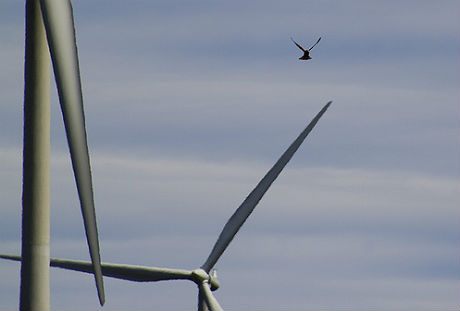 A new wildlife fatality reporting tool for the wind industry aims to give researchers more data on bat and bird deaths — without publicly identifying the wind farms where they occurred.

The American Wind Wildlife Institute will start seeking voluntary submissions of wildlife monitoring reports next month. Approved researchers will have access to the collection if they agree to keep specific projects and companies anonymous.

The data repository project is an attempt to resolve developers’ fears about legal liability and negative publicity, while also making it easier for researchers to find information on bat and bird collisions at wind turbines.

“The ultimate goal is to build a comprehensive wind-wildlife database,” says Taber Allison, director of research and evaluation for the American Wind Wildlife Institute.

The institute is an independent nonprofit organization whose board of directors is split evenly between representatives of the wind industry and conservation groups (including members of RE-AMP, which publishes Midwest Energy News.)

The initial focus will be on gathering data on post-construction fatality monitoring — wildlife surveys conducted after a wind farm is built and in operation. State agencies are requesting post-construction monitoring more frequently in recent years as a condition for granting permits.

Even though the studies are becoming more common, they’ve been largely inaccessible to wildlife researchers. Many reports are never made public. Others are hard to find or don’t provide enough detail about analysis and assumptions to be used in broader studies.

The American Wind Wildlife Institute has been developing its Research Information System for about a year and a half. It just completed a successful test run for technical issues, and now it’s ready to start soliciting its first submissions after the holidays.

Wind farm operators who conduct post-construction monitoring studies will be able to upload their data and literature to the system, which will convert it to a common, searchable format that can be queried by approved researchers.

After gathering enough studies, the institute will likely hand-pick an analyst who would be given controlled access to the information and be asked to produce a peer-reviewed, published research report using the data.

Allison says he eventually sees opening up the database to outside research proposals, but first they need to establish trust with wind developers and prove they can protect participants’ privacy.

There’s still plenty researchers could learn without publicly identifying the wind farms involved, he says. They could compare fatalities by region or turbine type, or look at how different wildlife survey techniques produce different results.

Allison says they’ve had a “generally favorable” reception from wind developers. Several have already provided the institute with sample data for use in the test run. The American Wind Energy Association passed a resolution of support in February 2011.

One reason the wind industry is on board with the project is that it seeks to address some of developers’ top concerns about collecting and sharing wildlife fatality monitoring data.

A new survey of wind industry officials in the Great Lakes region found that fears about legal liability and negative publicity were developers’ top reasons for not wanting to share post-construction wildlife fatality data.

The survey, by Minneapolis environmental research firm Dovetail Partners, interviewed 46 stakeholders, including 19 developers or consultants and 17 employees of state or federal agencies.

As wind developments have moved closer to more populated areas, several projects have run into resistance from local activists. Companies don’t want to publicly share data that’s going to be misinterpreted and spun against them by opponents.

They also don’t want to be in the position of building a criminal case against themselves. Most birds are protected by federal law, and wind developers don’t have any guarantee they won’t be prosecuted for unintentional kills.

On top of that, the studies are expensive, ranging most often between $50,000 to $250,000 per year, says Rob Bouta, a senior environmental scientist with Westwood Professional Services, which consults for energy and land developers.

“It’s time consuming. It’s labor intensive. It requires a certain amount of statistical analysis,” says Bouta. “You wouldn’t want to do that kind of study, and as a result put your project more at risk.”

Post-construction wildlife monitoring is becoming more common, but that’s only because more government agencies are asking for the studies as part of permitting agreements.

Over the last eight years, Bouta has worked on around 70 wind projects, mostly doing pre-construction wildlife studies. He’s currently working on his first post-construction study, which he believes is the first in Minnesota in more than a decade.

Can he say which wind farm he’s studying? “I would prefer not to,” says Bouta, citing the same privacy sensitivities identified in the Dovetail survey.

Wind developers and agency officials both identified cost as the top barrier to collecting post-construction wildlife data, but they gave different responses when asked why more data isn’t shared with government agencies.

Agency representatives said developers don’t share wildlife data with them because they’re afraid of being told to change or curtail their operations, which developers actually cited as their fourth highest concern.

Dr. Sarah Stai, an associate ecologist and author of the Dovetail report, says she hopes the survey can help agencies and developers find common ground by better understanding each others’ perspectives.

“That’s really important to overcoming the barriers, that everyone’s on the same page,” says Stai. “We don’t have a huge sample size, but it does appear they’re not on the same page.”

Stai says the reporting system by the American Wind Wildlife Institute is a promising step toward solving some of developers’ concerns about sharing data.

“The idea is everybody benefits from learning what happens [after construction] so that we can make better predictions in the future.”