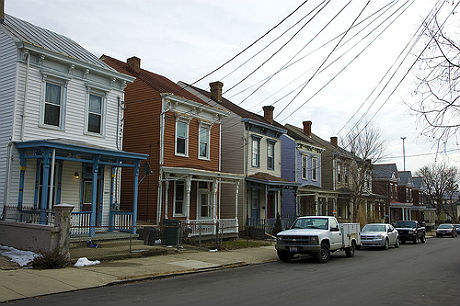 A row of homes in Cincinnati, Ohio. (Photo by Ian Freimuth via Creative Commons)

In the past two years, scores of communities across the Midwest, particularly in Illinois, have adopted municipal aggregation of their electricity supplies, wherein city officials break with long-standing utilities and decide where to buy cheaper and often cleaner electricity from alternative suppliers on behalf of residents.

Chicago is among the most recent, and with the city’s vast buying power, renewable energy advocates are hoping to use the opportunity to make a significant dent in pollution and carbon emissions.

However, if the experience of another Midwest state is any indicator, whether that actually happens could be difficult to determine.

Ohio was one of the first states to enact legislation allowing municipalities to aggregate, adding the concept to the legislation that deregulated the state’s energy market in 2001. Currently at least 220 Ohio communities have chosen electric aggregation, and 120 have adopted natural gas aggregation, according to the Public Utilities Commission of Ohio. And in the last two years at least 160 new electric aggregator broker companies have gotten state certification.

Ohio provides an interesting case study in the ways aggregation can play out; especially since it is historically known as a coal state: the fifth-most coal-dependent in the country according to the Union of Concerned Scientists, with a powerful mining industry and 20 major coal-fired power plants (though about half of them are scheduled to close in coming years).

Ohio also symbolizes the way aggregation can be a complicated mix of idealism and pragmatism, of making realistic deals in the present while hoping for more sweeping changes in the future.

‘The second best thing we could come up with’

In August 2011, Cincinnati’s city council considered two ordinances to allow aggregation of the city’s electric and natural gas supplies. Both ordinances passed after heated debates, and then voters approved the measures in the November 2011 election. They were pushed by vice mayor Roxanne Qualls, who had served three terms as mayor of Cincinnati in the 1990s.

Qualls was also previously director of the Cincinnati office for Ohio Citizen Action, a non-profit environmental group with 80,000 members that has long backed aggregation (and also a member of RE-AMP, which publishes Midwest Energy News). Ohio Citizen Action Cincinnati program director Rachael Belz said she and other staffers pounded the pavement in support of the aggregation ordinances in fall 2011.

“We hit the campaign trail, it was like running for office on behalf of aggregation,” said Belz.  “People had a lot of questions about why, what’s in it for me.”

After the measure passed, the city held public hearings and bidders were told to submit savings estimates for both green and conventional energy. Ultimately the city decided to purchase 100 percent renewable energy – making it the first major city to do so — even though the renewable option meant less savings than non-renewable power.

Cincinnati accepted a bid from FirstEnergy Solutions, which promised that 53,000 customers would save about $133 a year during the two-year contract compared to what they were paying with Duke Energy Ohio, which previously served the city. FirstEnergy Solutions had offered $156 annual savings with non-renewable power.

“There’s nothing listed in the contract specifically about how we supply the renewables,” said FirstEnergy spokesperson Diane Francis. “Our generation portfolio is diverse – we invest in solar projects, like one at the Cincinnati Zoo, and we are the largest provider of wind through PPAs (power purchase agreements) in the region. We have a really diverse fuel mix already, and our purchase of RECs also helps with the renewable market.”

Francis said FirstEnergy Solutions, which also has contracts with Illinois aggregated municipalities and scores of other Ohio communities, is “really the leader in terms of electrical aggregation” in part because of its “turnkey approach” – “communities really have to do very little work to provide this benefit to the residents.”

Belz said that while ideally Cincinnati residents would like to buy locally-generated renewable energy and see new clean energy sources created, that simply wasn’t realistic. There aren’t enough renewable energy sources in the area to meet a significant portion of Cincinnati’s demand, she said, and seeking such a situation would only hold up implementation of the aggregation contract.

“Organizers were seeing it as a first step, not the end,” Belz said. “Contracts in Ohio are one to two years, so this gives us time to figure out how to make the contract better, see if there are other opportunities.

“We’d love for renewable energy to come right from Cincinnati and be distributed generation, not RECs, but the second best thing we could come up with was ‘Well we may not be supporting renewable energy market growth right here in Ohio but we are demanding it come from green sources, and we’re helping to put dollars in the renewable market in other parts of the country.’”

FirstEnergy Corp., the parent company of FirstEnergy Solutions, runs numerous nuclear and coal plants, including the troubled Davis-Besse nuclear reactor near Toledo. Other bidders in Cincinnati included AEP, with an extensive coal fleet and significant pro-coal lobbying expenditures; Constellation Energy, an Exelon subsidiary with an affiliated nuclear group; and Duke Energy Retail Services, an affiliate of Cincinnati’s former utility Duke Energy Ohio – both are subsidiaries of the North Carolina-based company known for its numerous coal and nuclear plants.

“In Ohio it’s pretty much who are the existing players and how are we going to divvy things up between AEP, FirstEnergy and Duke,” said Mike Johnson, a senior analyst for Greenpeace. “Really and truly this is kind of a reshuffling – you’re really not facilitating any sort of significant replacement of the current grid mix. FirstEnergy is selling into Duke’s territory, AEP is selling into FirstEnergy’s territory, but fundamentally the same power supply is being sold.

“Granted there may be some rate relief,” he said, “but it’s primarily a better financial outcome, not necessarily an environmental one.”

Municipalities might even sign a contract with an unregulated subsidiary of the same company they broke with by aggregating in the first place. Before aggregation Duke Energy Ohio was Cincinnati’s only major utility, and affiliate Duke Energy Retail Services bid on the contract after aggregation, though it offered by far the lowest annual savings – only $26 compared to First Energy’s $133 winning bid. Cincinnati customers will continue to get their bills from Duke and receive their electricity on Duke’s wires.

Though Duke lost out on the electric aggregation front, Duke Energy Retail Services was awarded Cincinnati’s natural gas contract, with a promise not to purchase gas obtained through hydraulic fracturing, and an estimated $163 annual savings.

In northeast Ohio, FirstEnergy Corp. was the regulated utility for customers of Northeast Ohio Public Energy Council (NOPEC), a group which negotiates with utilities, before the group chose aggregation. After aggregation, NOPEC picked subsidiary FirstEnergy Solutions to serve its 600,000 businesses and residential customers in 126 communities.

NOPEC had originally signed with Gexa Energy, a subsidiary of NextEra Energy Resources, which is one of the country’s major suppliers of solar and wind power. But after a complicated series of events, that contract was voided and NOPEC contracted with FirstEnergy Solutions. Some clean energy advocates saw the contract switch as a major disappointment.

Belz said that while customers who want cleaner, greener energy may not be big fans of FirstEnergy, there were pragmatic reasons to choose that supplier in Cincinnati.

“When you’re talking about a large pool of ratepayers in a decent-sized city, especially since it’s the first contract, (the committee that recommended the contract) wanted to consider [whether] any of these companies get points for having done these kinds of contracts before, how long have they been in existence?” said Belz, who was not on the committee but followed the proceedings closely.

“Ohio Citizen Action has worked on FirstEnergy for a long time on all kinds of polluting plants – there is no love lost between us,” she said. “It’s not necessarily that they are all of a sudden this great company, but they are doing something that consumers asked for, which is a good thing.”

Meanwhile the public utilities commission publishes a frequently-updated “apples to apples” chart showing prices offered to individual consumers by alternative electric suppliers – including the unregulated affiliates of regulated utilities. Jim Drummond, the commission section chief of service, monitoring and enforcement, noted that consumers can check the chart and decide to opt out of aggregation if they find a better deal they can access individually.

“There’s a couple things I really stress, from my background in the private sector,” Drummond said. “I tell people you need to understand what’s on your bill, you need to know how your bill is calculated.”

Generally after municipalities adopt aggregation they sign relatively short-term contracts with suppliers – often one or two years. This is in part because when consumers can opt out of the aggregation plan, there is a lack of certainty that the rate base will remain large enough to commit to a long contract.

Skeptics of aggregation’s ability to drive renewable energy generation say that such short contracts are unlikely to lead to new clean energy construction, since suppliers need a bigger commitment to raise financing for new projects.

But the NOPEC contract with FirstEnergy will run for seven years, a move which theoretically could allow FirstEnergy to invest in more renewables.

While some clean energy advocates say aggregation in Ohio leaves much to be desired, Belz and others see Ohio as a symbol of the concept’s potential even in a politically moderate, fossil fuel-heavy state. Qualls, an ardent aggregation backer, recently announced that she is running for mayor of Cincinnati again in 2013. Belz said that if aggregation with a clean energy component can succeed in Ohio, it can succeed anywhere.

“It’s the right time for this to happen in a place like Cincinnati, and other places are saying they would like to use Cincinnati as an example,” she said. “It’s not the coasts, where people might be very ‘different,’ it’s not San Francisco, a place where ‘they’re always doing something like this.’ When people think about Cincinnati or Ohio, they think about regular people.”