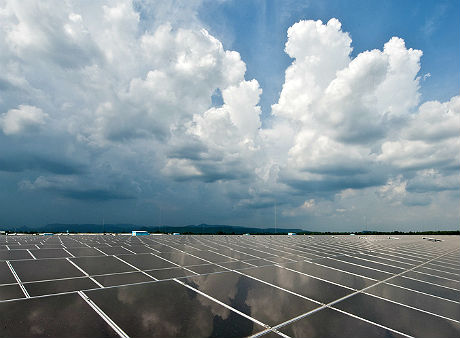 The amount of solar power on the Midwest’s electricity grid is minuscule enough that a cloudy day doesn’t cause problems for the system.

As solar makes inroads, though, utilities may eventually need new tools to make sure they can continue providing cheap, steady power when the sun goes behind a cloud.

Several efforts are currently underway to provide the industry with better sunlight forecasts, much like what grid operators currently use for wind power. Earlier this month the U.S. Department of Energy announced $8 million in funding for two projects to improve solar forecasting.

With wind power, accurate wind forecasts let grid operators make early decisions about how much electricity it will need from other, non-wind sources.

Making those calls in advance allows them to avoid running other power plants unnecessarily, and also reduces the odds of having to bid for electricity on expensive spot markets.

Sunlight forecasts could play a similar role for solar power and might help resolve some of utilities’ apprehensions about solar’s variability.

“The utilities are scared they won’t be able to manage too much solar on the grid,” says Manajit Sengupta, a senior scientist with the National Renewable Energy Laboratory in Colorado who studies solar radiation.

Managing an electric grid requires a constant balancing act, making sure the amount of electricity generated is always in line with what’s being used by customers. Variable electricity sources like wind and solar add a layer of complexity.

Solar is barely a blip today, so grid operators don’t need to react every time it clouds over. If the share of electricity coming from solar increases, though, an unexpectedly overcast day could cause problems.

“The moment we start reaching 3, 4, 5 percent, that’s huge. When you suddenly lose half of that, making that up is significant,” says Sengupta.

With solar prices falling by about 10 percent per year, that could come sooner than many expect, especially in regions with higher than average electricity prices.

Most of the interest in solar forecasting today is limited to those regional pockets, places like California and Hawaii where solar photovoltaics are already at or near grid parity.

“It’s very much an emerging market. It’s not nearly as mature as wind [forecasting], but I see it rapidly growing,” says Tom Hoff, president of Clean Power Research, a California firm that’s among the first to offer a commercial product for solar forecasting.

Keeping your head in the clouds

Clean Power Research released its SolarAnywhere product in May. The satellite-connected software gives a minute-by-minute update of approximate electricity output for a solar fleet, as well as forecasts up to seven days ahead.

“One of the beautiful things about solar is you can kind of see which way the wind is blowing the clouds,” says Hoff.

Another forecasting technique under development at the University of California-San Diego uses images from sky cameras placed on the ground at solar installations for short-term predictions.

“A partly cloudy day at a solar plant can cause a lot of variability,” says Mark Ahlstrom, CEO of WindLogics, a subsidiary of NextEra Energy that works on renewable integration issues.

The promising news for solar is that when several solar plants are installed in the same region, the variation tends to smooth out more quickly than wind, says Ahlstrom. A cloud usually doesn’t shade every solar plant at once.

One of the lessons learned from wind integration is that grid operators should focus on variation in the system as a whole, rather than looking at individual wind farms or solar plants, he says. Also, variability can be better absorbed in larger balancing areas.

“I think you’ll see things move along more quickly when it comes to advancing solar integration into the grid because of what has been done with wind in the past,” says Ahlstrom.

Another big grid innovation that helped wind power integration and should do the same for solar, says Ahlstrom, is faster, near-real-time electricity markets.

Historically, almost all electricity generation decisions were made a day ahead of time. Now, many grid operators can adjust generation every five minutes in response to changes in electricity demand and wind output.

“We anticipate the need to do much shorter time frames to manage some of those grid integration challenges,” says Marie Schnitzer, who oversees the solar consulting business for AWS Truepower, which also sells forecasting services.

The demand for solar forecast data is regionalized but growing, says Schnitzer, who spoke about the need for better solar forecasting tools at the Renewable Energy World Conference in Orlando, Florida, last week.

“It’s not going to be an easy problem to solve,” says Ahlstrom, “but I think the current research is certainly on the right track.”