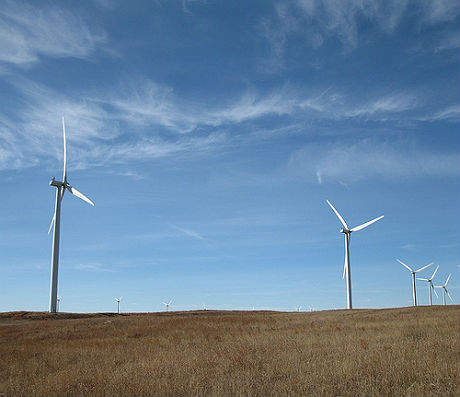 The ongoing war of words over the “fiscal cliff” that intensified this week left unanswered one of the most important questions for energy watchers: What will happen to a suite of expired or expiring tax credits?

The debate over those incentives, including the wind production tax credit and subsidies to promote energy efficiency and alternative fuels, has largely simmered on the back burner amid the broader debate over across-the-board tax hikes and spending cuts scheduled to take effect in January. That is still the case, although observers continue to believe they have a good chance of being included in a year-end cliff package, if there is one.

House Speaker John Boehner (R-Ohio) on Tuesday unveiled a “Plan B” approach to avoid most of the looming tax hikes, but it did not address the PTC or other so-called tax extenders. President Obama and Senate Democrats were quick to dismiss the offer.

Rep. Pat Tiberi (R-Ohio), who has been a leading negotiator over the fate of the PTC, acknowledged that it and other temporary tax provisions “take a back seat” to the broader debate over the cliff and that it would take “a deal on everything else” to see movement on extending the temporary credits.

Boehner’s proposal was seen as largely a messaging exercise, with the extenders still expected to be along for the ride if Congress and the White House can reach a broader deal on taxes and spending, lawmakers and lobbyists said.

“I suspect this is all for show,” one wind lobbyist said of Boehner’s proposal.

‘A lot of quiet conversations’

Sen. Mark Udall (D-Colo.), who has been leading a public push for a PTC extension with near-daily floor speeches, said yesterday that there have been “a lot of quiet conversations” among senators over how to insert the credit into a broader fiscal cliff deal but that he was not at liberty to say more.

Udall participated Wednesday in an online discussion with Energy Secretary Steven Chu over the future of the wind industry and the importance of policies such as the PTC.

The House is expected to vote soon on the Boehner Plan B proposal. It would continue George W. Bush-era tax cuts for people earning less than $1 million per year but not address temporary tax breaks like the PTC or across-the-board spending cuts known as the sequester.

Rep. Kristi Noem (R-S.D.), a leading PTC advocate, said Tuesday morning that the fate of the wind credit had not yet been discussed with the full House Republican conference but that she remained optimistic it could win an extension as part of a larger fiscal cliff deal (Greenwire, Dec. 18).

The PTC and other energy incentives are included in a broader mix of tax provisions known as “extenders” because they are temporary and often have to be renewed. The Senate Finance Committee this summer voted to extend and modify the PTC as part of a larger package to extend dozens of temporary tax breaks, including big-ticket items such as relief from the alternative minimum tax (AMT) and the popular research and development credit.

That bill never came to the floor, but lawmakers remain optimistic it will see action before the end of the year as part of a larger package.

“I expect that when it comes to extenders if we have a fiscal cliff bill that all of the extenders will be in there, probably driven by AMT or research and development,” Sen. Chuck Grassley (R-Iowa), a leading PTC champion, told reporters Tuesday.

Boehner’s Plan B, which is not expected to pass the Senate, did include a permanent AMT fix, although other extenders were not included.

Tiberi predicted Congress would eventually address the so-called tax extenders, and he suggested that separating the AMT fix would not affect the chances for other extenders to be renewed.

“I think there’s a lot of members who are supportive of a lot of the different extenders,” Tiberi told reporters last night. “So whether it’s done next week if there’s a deal or next month if there’s a deal, I still think in the interim — before comprehensive tax reform, which is a goal for a lot of us — that you have that debate still.”

Sen. Orrin Hatch (R-Utah), the ranking member on Finance, said, “You can’t help but have those [as] part of a final debate” over the fiscal cliff.

Support for a phase-out

The wind industry last week came out with a proposal to eventually phase out the PTC over a six-year period, an idea that was seen as an effort to build support for an extension beyond its scheduled expiration this year (E&E Daily, Dec. 13). The proposal showed that the American Wind Energy Association was willing to back up its long-standing contention that the credit would not be needed forever, although allowing it to expire as scheduled this year would devastate wind developers and component manufacturers.

AWEA said the proposal should be considered in the context of tax reform and continues to urge an immediate extension beyond the credit’s scheduled expiration this year.

“I think [the phaseout timeline will] be negotiated, but the point is I think we’re starting to get people engaged in the discussion,” said Sen. John Hoeven (R-N.D.), who has supported phasing out the credit. “And hopefully that will get us to a plan where we can get enough people on board. I think it’s moving toward the right place.”

Hoeven said any extension to the credit would have to be paid for, an idea also supported by Hatch.

“The question is whether there’s some money there” for a phaseout of the credit, Hatch said when asked about the wind industry proposal.

Extending the PTC for one year with the Finance Committee model would cost $12 billion over a decade, according to the Joint Committee on Taxation. AWEA’s phaseout proposal has not formally been modeled, but lawmakers have sent similar ideas to JCT and received cost estimates in the range of $10 billion to $14 billion over a decade, according to sources familiar with the proposal. An independent estimate prepared for E&E Daily last week estimated the AWEA proposal at $21.5 billion over 16 years (E&E Daily, Dec. 17).

In addition to just winning an extension to the credit, wind supporters are continuing to lobby the House to accept the Senate Finance Committee’s version of an extension, which expanded the credit’s eligibility requirements by allowing projects that begin construction before the end of next year to receive it, rather than requiring they be fully operational to be eligible (E&E Daily, Dec. 10).

Tiberi said he and House Republicans were seeking clarity on how that change would mesh with the longer-term phaseout AWEA is proposing.

“If it’s one year, the language is probably needed,” he said, but not for a longer-term extension or phaseout.