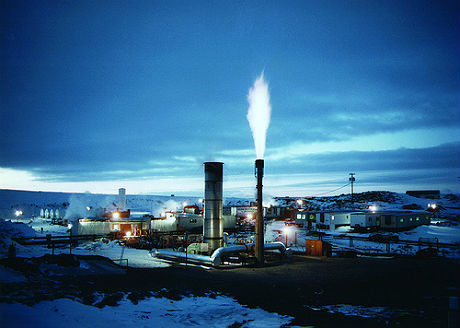 The Lawrence Livermore National Laboratory has tested underground coal gasification at this site near Hanna, Wyoming and other locations. (Photo via LLNL)

As low-cost natural gas displaces more and more conventional coal plants, a relatively unknown method for extracting energy from coal — without removing it from the ground — might seem far-fetched.

Backers of the technique, however, still believe the technology has a future in an increasingly carbon-constrained world.

Underground coal gasification, or UCG, is a method in which coal seams are basically ignited underground, and the gas released by the combustion is harvested and refined so that it can be burned in power plants to produce electricity, used to heat homes or liquefied as fuel for vehicles or aviation.

The ash and other toxic waste products – including carcinogens like benzene and toluene — are left underground, surrounded by impermeable rock. Industry backers say this is a safe way to store the contaminants for perpetuity; critics argue there is always a chance for contaminants to leach or migrate into aquifers and groundwater.

UCG proponents bill it as a way for coal-rich regions to tap their reserves while avoiding the worst environmental and social impacts of coal mining and traditional coal-fired power plants. There are no massive trucks tearing away the sides of mountains or human beings crouching underground inhaling coal dust, and the bulk of the pollutants that harm public health are left underground.

In this sense UCG sounds like a viable option for U.S. coal regions like the Powder River Basin and the Illinois Basin, though the current availability of cheap natural gas means UCG likely won’t take off in the U.S. any time soon, according to industry sources.

UCG pilot projects are underway in a number of locations around the world, including China, South Africa and the United Kingdom, where the Underground Coal Gasification Association (UCGA) international trade group and several other major players are based.

More than 30 UCG pilot projects have been done in the U.S. in the past, including in Alaska, Colorado, the Powder River Basin in Montana and Wyoming, and the Williston Basin in North Dakota. The federal government funded significant UCG research in the 1970s when the energy crisis sparked investment in various non-traditional energy sources.  More recently there’s been interest in UCG combined with carbon capture and sequestration, including a 2010 study in North Dakota.

The Lawrence Livermore National Laboratory has looked at the potential of UCG in the Illinois Basin coalfields, which underlay much of Illinois and parts of Indiana, Kentucky and Tennessee. Though the Illinois Basin seams are thinner than ideal for UCG, the relatively high heat potential of the coal and the type of rock that encases it were deemed favorable for underground gasification.

UCGA spokesman Phillip Smith noted that political support for the coal industry in Illinois and ongoing research into carbon sequestration in the state also mean it might be conducive to UCG.

“It is the site, primarily, that determines whether a location is suitable for UCG; the thickness of the seam, its angle, its depth and the makeup and thickness of the rock around it, its distance from major geological faults, rivers, lakes, mines, infrastructure such as highways and populated areas,” Smith said. “If a suitable site was located, there also has to be the political will to facilitate UCG.”

The coal seam is ignited by creating intense pressure via air and steam piped down through an injection well. The gas that results is collected rising up out of a separate hole, the production well. UCG is typically done in wet coal seams inside aquifers that are surrounded by hard impermeable rock, meaning that water flows in to fill the space after coal disappears and contamination theoretically doesn’t flow into other aquifers or groundwater.

Critics worry that toxic byproducts will cause water contamination, however. They point to Cougar Energy’s project in Australia, shut down after high levels of benzene were found in nearby wells in 2010. At least two pilot projects in the U.S. also indicated likely groundwater contamination, according to an article [PDF] on Lawrence Livermore National Laboratory’s website.

Industry sources stress that the coal underground is not “burned” per se since burning indicates a high-oxygen environment and a different combustion process; rather it is transformed into gas in a low-oxygen environment, where the injection well is usually the only source of air.

Portions of the coal seam are gasified in sequence, often along a horizontal or slanted seam. The process has some similarities to horizontal hydraulic fracturing, where shale formations are split apart to release gas. But UCG proponents take great pains to distinguish their industry from fracking, noting that they are not injecting chemicals or sand into the earth.

Rohan Courtney is chairman of Clean Coal Ltd., which is developing a number of UCG projects in the United Kingdom, offshore under the sea, tapping coal deposits that in decades past had been mined by operators who tore up the sea floor and left coal washing up on shore.

Courtney thinks there are a billion tons of coal under Swansea Bay off the coast of Wales, and that much of it can be tapped for energy through UCG. Clean Coal Ltd. has also consulted regarding UCG in the Powder River Basin in the U.S., which supplies coal for many Midwestern power plants. Courtney said that Peabody Energy, with massive operations in the Powder River Basin, has expressed interest in UCG.

Backers says that UCG can produce electricity at a lower cost than “clean coal” or natural gas-fired plants. A 2010 study by the UK’s Department of Energy and Climate Change, with assistance from the UCGA, found it costs $66 per MWh to generate electricity from UCG, compared to about $145 for onshore wind and about $110 for a typical gas-fired plant.  It placed UCG’s cost as similar to nuclear power.

“Renewables are the holy grail, but they are terribly expensive,” said Courtney. “Our idea is to look at this clean coal technology to see what we can do and make cleaner energy while we are waiting for biofuels and wind and whatever else to meet world demand.”

Coal gasification produces large amounts of hydrogen, which in past decades was seen as an inconvenience. But now it adds value to the industry.

A 2007 article by Lawrence Livermore National Laboratory explains: “In the U.S., when gas and oil prices dropped in the 1980s and 1990s, efforts to commercialize UCG came to a halt. Today, high prices have returned for all kinds of fuel, and uncertainties exist about political stability in the Middle East. A renewed U.S. interest in coal gasification is not surprising. Furthermore, hydrogen is now a welcome by-product because of the current interest in alternatively fueled vehicles.”

Smith said “there is a higher likelihood that UCG will start to move into a commercial operation in the U.S. than in many other nations.”

“But that is still some years away,” he continued. “Economic conditions, rather than technical issues, are dictating the speed of adoption.”

Courtney likes to point out that UCG has been around for more than a century, and the idea of extracting gas from coal goes back at least 150 years.

In the past, mined coal was crudely gasified into “town gas” which was used to light street lights. “That’s what lit Jack the Ripper as he was going about his business,” Courtney said.

Vladimir Lenin and Josef Stalin also promoted the technology in Russia, and Russian UCG operations consumed 17 million tons of coal until the last one was shut down in 1996, according to a history compiled by the UCG technology company Ergo Exergy.  Meanwhile a UCG outfit and power plant has operated in Uzbekistan for more than 50 years.

But while many former miners would like to see a resurgence of England’s domestic coal industry, UCG may not be what they have in mind: it creates few jobs “except for some engineers looking at computer monitors,” as Courtney described it.

The same dynamics would apply in the Illinois Basin, the Powder River Basin or other U.S. coalfields where UCG could theoretically take off at some point in the future – perhaps offering an affordable low-emissions energy source, but hardly a job boom.

Courtney said the process can be a hard sell to neighbors, who don’t like the image of underground coal fires or who associate it with fracking. He predicted that Wyoming will be the first U.S. state to embrace UCG on a commercial scale, noting its vast coal reserves and the fact it is “coal-friendly, energy-friendly and not a lot of people live there.”