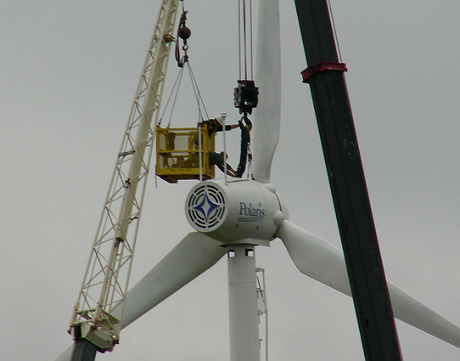 A wind turbine under construction near Pittsfield, Michigan in 2011. (Photo by Corey Seeman via Creative Commons)

On New Year’s Eve, many in the wind energy industry had already assumed they had been thrown over the proverbial fiscal cliff.

Workers had been laid off even as developers were rushing to get wind-power installations up and connected to the grid before 2012 came to a close.

That assumption was based on the expected expiration of a key tax credit, which despite its off-again on-again status over the years, has helped keep the industry alive since 1992.

That’s why many in the industry were pleasantly surprised Wednesday to learn that Congress had remembered them, after all, and extended 2.2 cent per kWh Production Tax Credit into 2013.

And this time around, the credit will apply to projects that begin construction in 2013, eliminating the rush to beat the clock by the end of the year.

“That was pretty critical to resuming development,” said Iberdrola spokesman Paul Copleman in an interview with Bloomberg News. “Without that, the extension might not have had any impact this year.”

An Investment Tax Credit for offshore wind projects will also be extended.

Wind power companies and environmental activists are happy with the renewal, but there is an undercurrent of frustration with the year-to-year uncertainty.

“Obviously it’s really exciting that Congress has brought in the new year with renewing the Production Tax Credit and the Investment Tax Credit, but of course both tax credits are on a year extension and are normally on a four-year cycle,” said Virginia Shannon, an associate with Environment Michigan. “So it’s really great to see this happen, but we need to keep choosing to invest wisely in our future.”

The stakes were high, according to Environment Michigan, which estimated that loss of the tax credit would cause new wind-energy construction to drop by 75 percent. effectively ending the 2012 boom in new installations.

Environment Michigan is a member of RE-AMP, which also publishes Midwest Energy News.

Rebecca Roberts, executive manager of Dowding Machining and Astraeus Wind Energy, based in Eaton Rapids, Michigan, applauded the passage of any bill at all.

“We have invested a significant amount of time and energy into making personal visits, making videos and writing members of Congress for the past year as we have been operating under the threat of the PTC expiration,” Roberts said.

“Although it wasn’t the 5- [or] 6-year phase-out that we had hoped for, the mere passage of the bill will be a positive sign for all of us in the wind energy business.”

The company had expressed fears last year that an end to the tax credit would undo progress it has made since the 2008 economic downturn.

“Unfortunately, since layoffs have already occurred in many companies and as uncertain federal policies have caused a ‘boom-bust’ cycle over the past decade, it will remain to be seen how quickly the industry can respond and how many wind farm projects they can at least get started by the end of 2013,” Roberts said.

“The manufacturing of wind turbines and their components is not a turn-key process,” she added, “but we remain very excited and positive that this PTC extension will drive technology advancements and continued growth of the wind industry.”

Shannon credits members of Michigan’s congressional delegation, particularly Sens. Debbie Stabenow and Carl Levin, for helping to push the extension through. It also helped, she said, that 30 businesses, elected officials and farmers signed a letter to the delegation just before the holidays urging the tax credits be extended.

Environment Michigan issued a report on wind energy in November saying that wind development in this state alone is the equivalent of taking 48,000 cars off the road each year. And if the PTC were to continue until 2016, the report said, that would have the effect of removing 169,000 additional cars from the road.

Opponents of tax credits have said that government’s place is not to pump up a technology, but rather let market forces alone decide whether it succeeds or fails. To that, Shannon said, the playing field has never been level.

“Historically, gas and coal have received billions of dollars of government subsidies and the American taxpayer has been footing the bill for a polluter of air and water and our contribution to global warming,” she said.

“The wind industry has also been clear,” she added, “that they will not need the tax credits forever.”