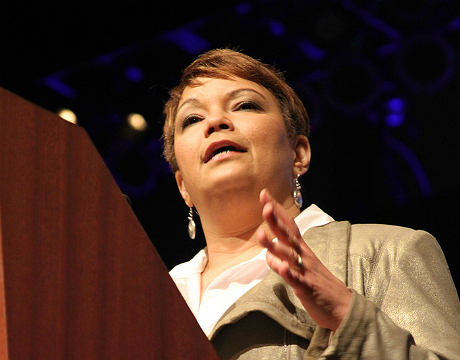 (Photo by Linh Do via Creative Commons)

Whoever fills the vacancy in the administrator’s office at U.S. EPA will be given a long list of expected rules and be warned of legal battles needed to implement them.

Then he or she will have to brace for continuing controversy over how to use what will likely be less resources.

As Lisa Jackson bids farewell to the agency, the new administrator has an extensive to-do list for climate and air quality efforts. Carbon emissions limits for newly built power plants that were proposed last March must be finished, and standards for existing power plants — the leading source of carbon dioxide emissions in the country — have yet to be drafted.

The agency must also propose performance standards for CO2 from oil refineries. These New Source Performance Standards are the outcome of a settlement between EPA and a coalition of environmental groups and states in 2010.

A shrinking budget born out of the fiscal cliff talks will bring even fiercer competition for government dollars in the coming years, said Bill Becker, executive director of the National Association of Clean Air Agencies, a group of state and local air quality regulators.

“If there’s anything we’ve learned in environmental protection over the past 40 years, it’s that uncertainty is a killer,” said Becker. “Uncertainty in funding makes our already difficult challenges more daunting.”

The next EPA administrator “will have to be extremely strategic and thoughtful about resources allocation in the agency,” added Becker. “Much of that will be totally out of their control.”

This doesn’t mean the administration must appease Congress, said Becker, but he or she will need to use the bully pulpit to make the case for discretionary environmental programs.

Jackson announced her resignation one week ago. Bob Perciasepe, the deputy administrator under Jackson, will undertake the administrator’s responsibilities when she steps down after the presidential inauguration at the end of the month. Perciasepe is one of the top contenders to take on the job throughout President Obama’s term.

How far will EPA regulate?

The agency will also need to revisit actions that the agency tried and failed to carry through to the end of Jackson’s administration. These include a change to the national air quality standards for ozone that was blocked by the White House in 2011 and the reformulation of the Cross-State Air Pollution Rule, which was rejected in federal court last year.

While Jackson became the symbol for the Obama administration’s environmental commitment, the turn to tax reform that dominated the end of 2012 will hinder EPA’s assertive rulemaking, said Scott Segal, director of the Electric Reliability Coordinating Council and a partner at the law firm Bracewell & Giuliani.

The cost of EPA regulations has stoked the fires of opponents, but environmentalists counter that these costs are far outweighed by the benefits in improving public health and avoiding catastrophic climate change.

With air quality and climate change rules like the Mercury Air Toxics Standards, the New Source Performance Standards for carbon dioxide from new power plants, updated air quality standards for particulate matter and two sets of fuel efficiency standards for new vehicles, Jackson leveraged her authority to the maximum, to the delight of environmentalists and the anger of the fossil fuel industry and Republican members of Congress.

“She definitely was willing to go and take criticism,” said Michael Livermore, executive director of the Institute for Policy Integrity at the New York University School of Law. “She wanted to use her position to achieve results for the American public.”

Jackson herself became a specific target of blame for the slow decline of the coal industry and power plant closures. Under her leadership, EPA published the endangerment finding that greenhouse gases were a threat to public health as many members of Congress remained skeptical about the human causes of climate change.

An industry coalition challenged Jackson-era EPA greenhouse gas rules, but a three-judge panel in the U.S. Court of Appeals for the District of Columbia Circuit ruled in favor of the agency in June. Now, EPA “has a rock-solid foundation to work from,” said Vickie Patton, general counsel for the Environmental Defense Fund.

“Administrator Lisa Jackson’s initiatives have been strongly anchored in science and law,” Patton said. “The bedrock of the work has been affirmed [by the courts].”

Jackson’s administration also stood firmly in support of the federal renewable fuel standard — the law that sets targets for the production of biofuels — and the approval of a 15 percent ethanol blend for gasoline, despite complaints from both anti-ethanol environmentalists and the oil and gas industry.

“The Obama administration deserves great credit for approving the use of E15, denying waiver petitions [to change the RFS], and generally for moving the agenda for biofuels forward,” said Bob Dinneen, president and CEO of the Renewable Fuels Association.

While they do not affect the oil and gas industry directly, the carbon rules for utilities will offer clues on how the agency will craft refinery regulations, said Howard Feldman, director of regulatory and scientific affairs at the American Petroleum Institute.

As the development of shale gas increases, so will the calls from environmentalists to impose greater oversight on air and water pollutants from hydraulic fracturing, or fracking, wells. EPA released a final rule last April that requires new hydraulically fractured gas wells to use technology that will cut toxic substances and smog-forming pollution by 2015. These rules, said the agency, would also create a co-benefit of curbing the highly potent greenhouse gas methane.

But co-benefits won’t be enough, say environmentalists. Last month, a coalition of seven states notified EPA of its intention to sue if the agency did not take action to curb methane emissions from fracking.

“There have been changes in the market fundamentals, and EPA has not kept pace,” said Patton, adding that the existing regulations don’t cover co-producing wells that also extract oil.

The boom has brought natural gas prices down to 10-year lows and has created jobs in rural communities around the massive shale plays. API, as expected, will push to prevent any additional regulations to fracking in the name of economic growth.

“Effectively, [last year’s rule] will lower emissions; we think that’s going to take care of that,” Feldman said. “We don’t think there’s any reason to put another level of control on top of that.”