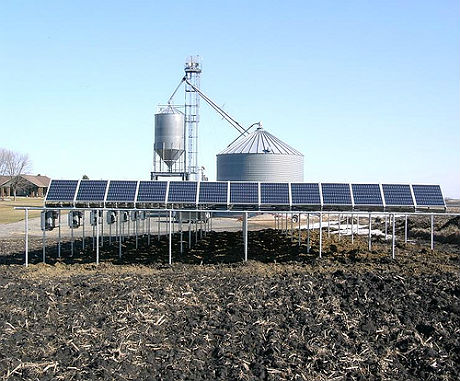 A solar array at a farm in central Minnesota. (Photo by CERTs via Creative Commons)

This could be the year major solar legislation sees the light of day in Minnesota.

A Democratic sweep in November has clean energy advocates optimistic about their causes following two years of legislative control by conservative Republicans.

The top priority on their agenda: a bill that would require Minnesota utilities to generate a tenth of their electricity from solar by the year 2030.

“Our top energy priority is the 10 percent solar standard,” said Steve Morse, executive director of the Minnesota Environmental Partnership, a coalition of more than 75 environmental and conservation groups.

“We have a tremendous untapped resource, and we have the stars aligned to make major headway in ramping up our solar distributed generation here in the state,” Morse said.

The Minnesota Solar Energy Act [PDF] was first introduced in May 2011 by Sen. Scott Dibble, D-Minneapolis, and former Rep. Kate Knuth, D-New Brighton (Knuth did not seek re-election this term).

The act would supplement the state’s existing 25 percent by 2025 renewable electricity standard, which has primarily been met by large-scale wind farms.

It’s among a handful of ideas being discussed to give solar power the kind of policy boost that wind energy has received in the state for the last two decades.

“I know it’s a long process and you never know what’s going to come out of the meat grinder at the end of the day, but I will be very shocked if we don’t pass significant solar legislation this year,” said Ken Bradley, chair of the Solar Works for Minnesota coalition, which has led the charge for the 10-percent solar mandate.

Fresh Energy, which publishes Midwest Energy News, is a member of both the MEP and the Solar Works for Minnesota coalition.

What’s in the bill

Bradley said the coalition of supporters backing the bill, especially among unions and businesses, is stronger than the one that helped push through the state’s 2007 renewable energy standard.

As it’s written, the solar standard would be phased in more slowly than the renewable standard. Utilities would be required to get just 2 percent of electricity from solar by 2022, with the remaining 8 percent coming between then and 2030.

The proposal calls for using a “buy all, sell all” model for utility integration. Solar system owners would sell all of the power they generate to their utility, which would credit the amount towards the customer’s electric bill.

The rate utilities pay for solar power would be set by the state’s energy office using a valuation formula laid out in the legislation. The price would attempt to reflect the value of the electricity as well as solar’s benefits to the grid and the environment.

The cost to residential ratepayers would be in the “tens of cents” per month for the first several years and increase to about $1 per month during later years, Bradley said — small, he argued, compared to the $9 monthly rate increase Xcel is asking for to cover nuclear repairs and upgrades.

Bradley said he hasn’t received any indication of hesitation from legislative leaders about the bill.

But she also said she’s keeping an open mind about whether it is the best way to boost solar installations in the state.

“The question is: what is the right policy mechanism to incentivize growth in solar in Minnesota? It may be we do a 10 percent by 2030 mandate, and that may be the way we choose to stimulate the market and send a signal, but that might not be the most effective method right now.”

Solar lobbyists are hoping for a mix of policies and incentives that can put solar on a stable growth path in the state — which the industry is more in need of since Xcel Energy’s decision last year to end its solar rebate program after 2015.

“One major push will be to find an alternative source of funding for solar financing incentives in Minnesota,” said Bob Long, a lobbyist with Larkin Hoffman who represents two Minnesota solar manufacturers, tenKsolar and the Rural Renewable Energy Alliance.

Long said one idea that’s been discussed in the weeks leading up to session was letting solar projects tap into financing from the state’s Renewable Development Fund, which has supported wind farms since the mid-1990s.

Other parts of the legislature’s energy agenda are still coming together. Hortman and her counterpart in the Senate, John Marty, D-Roseville, said last week they were still meeting committee members and hadn’t seen specific legislation yet.

Transit funding and electric vehicle infrastructure may come up in transportation committees. An energy storage standard may be introduced, Long said, though it doesn’t have the momentum of the solar standard bill.

Marty, chair of the Senate Environment and Energy committee, said he wants to review the legislature’s 2007 accomplishments, which included the renewable standard and an efficiency mandate, and have a discussion about what comes next.

“We’re trying to make our energy system sustainable for the long run, in a way that works for people,” Marty said. “I think now is the time when, in a very thoughtful matter, we take a serious look what’s going on, what we should be changing, and how we change it as aggressively as we can.”

Editor’s note: An earlier version of this story incorrectly stated Rep. Melissa Hortman would be House author of the bill. Also, Rep. Hortman is from Brooklyn Park, not Brooklyn Center.