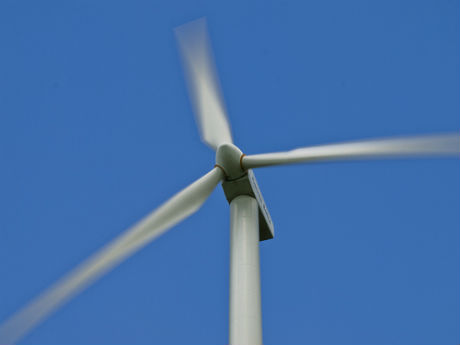 According to Bill Noto, a software engineer for GE Renewable Energy, the wind energy highway is rife with speed traps.

When there’s sufficient demand and room for electricity to flow, utilities and grid overseers want wind farms to run full throttle. But during periods of congestion, or when market conditions call for less power on the grid, wind energy operators have to apply the brakes to keep their power from overwhelming the system.

Such downward shifts in electrical output, called “curtailment,” can make running a wind farm more difficult, especially when every turbine represents an independent engine that must be throttled up or down to meet the desired overall generation output.

Indeed, curtailment remains one of the industry’s most significant challenges as dozens of new wind farms come online every year, significantly adding to the U.S. power supply but also changing the balance of where power is generated and how it is integrated into the grid.

But solutions are being developed by GE and others to make wind farms more resilient to supply-and-demand sine curves and ease the unanticipated shifts in electrical output that have forced wind farms to make hasty “all-on” or “all-off” decisions based on the needs of the grid.

Among the technologies being put into service at wind farms around the country is GE’s WindCONTROL software, which allows for the automation of most decisions about wind turbine operation and electrical output during periods of curtailment.

Human decisions about which turbines to turn on and which to turn off are no longer required. Rather, the software evaluates the wind farm’s operations and automatically dials down the output based on a host of factors, including wind conditions and turbine configuration.

Minesh Shah, manager of the Electrical and Controls Center of Excellence at GE Renewable Energy, said the software signals each turbine at a wind farm to produce at a certain level. Then the turbines use blade-pitching technology to reduce electrical output to the desired level.

“Hence, we avoid having to turn the turbines off and on,” Shah said. “The continual start and stop of the turbines creates more wear and tear on the turbine components than making smaller changes by blade pitching that will simply reduce the power.”

While curtailment is already posing challenges in some parts of the country with high wind farm densities, such as west Texas, experts predict start-stop issues will become even more pronounced as turbines become more densely concentrated on the land and new farms expand to regions once considered unsuitable for wind power generation.

In 2011, Texas’ primary grid operator, the Electric Reliability Council of Texas (ERCOT), curtailed 2,622 gigawatt-hours of wind power, or 8.5 percent of all wind energy available to the grid, according to the laboratory. Two years earlier, in 2009, ERCOT’s curtailment rate was 17.1 percent (3,872 gigawatt-hours), the highest level recorded in the United States.

By comparison, the Midwest has had generally lower curtailment rates. In 2011, the Midwest Independent Transmission System Operator curtailed 657 gigawatt-hours of wind energy, or roughly 3 percent of capacity, across all its territory excluding Minnesota. In the Gopher State, the curtailment rate has held steady at 1.2 percent for 2009, 2010 and 2011.

Bruce Hamilton, a director at Navigant Consulting’s energy practice in Portland, Oregon, and former operations executive at Iberdrola Renewables, said industry sources have reported increases in curtailment across the country, including Texas, the Midwest, the Pacific Northwest and New England. In some cases, the amount of curtailed generation has approached 10 percent of total capacity.

“That’s a big number, and it’s real money lost for a wind farm owner, right off the top,” Hamilton said.

Wind energy supply disruptions can be caused by factors other than transmission capacity and utility needs, according to experts. In 2011, for example, curtailment shot up in the Pacific Northwest as the Bonneville Power Administration faced a surge in hydropower production after a heavy spring runoff created unprecedented high flows in the region’s rivers, according to the Lawrence Berkeley lab.

Kevin Porter, a senior analyst at the energy consulting firm Exeter Associates and co-author of a 2010 survey of U.S. wind power curtailment for the National Renewable Energy Laboratory, said that although start-stop issues have long been a factor in wind farm operations and will continue to be in the future, curtailment levels will increasingly depend on weather and climate variables rather than the ebb and flow of electricity demand and transmission congestion.

“This is going to differ from year to year,” Porter said. “If you have a strong wind resource in a given year, and you’re in an area like California and the Pacific Northwest where there are other generation assets like hydrodams, then the grid operator might have problems. You’ll see curtailment shooting up.”

On the other hand, “if you have a bad wind year, you’re not going to see a whole lot of curtailment. It’s all very dynamic, and it’s not always easy to predict where things are going to tighten up,” he said.

Jonathan Cheszes, a Toronto-based associate director with Navigant Consulting, said such start-stop issues are more than an operational challenge for wind energy producers. Where curtailment exists at high levels, it affects the underlying economics of wind power. For example, wind farms that are subject to high rates of curtailment will face higher project financing costs than farms where the electricity output is less constrained.

“At 1 percent curtailment, revenues and [debt service coverage ratios] remain at a level that would be comfortable to most lenders,” Cheszes wrote in a March 2012 analysis for Renewable Energy World. “However, at 5 percent curtailment and higher, revenues and DSCR deteriorate, putting projects at risk of not meeting their debt obligations or reducing the amount of debt the project’s cash flows can support.”

In an interview, Cheszes noted that curtailment does not necessarily make a project uneconomical, but that investors want to be able to reliably predict how much electricity a wind farm will produce over a year, after accounting for any curtailment.

Technologies like GE’s WindCONTROL will help facilitate dispatch of that energy to the grid.

“I think it is becoming more standard in the industry to have this type of tool,” he said. “The goal is to have the ability to help the wind farms to go down to a certain generation level rather than go off completely.”