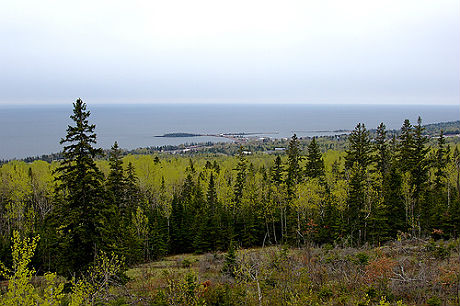 The hills above Grand Marais, Minnesota, with Lake Superior in the background. (Photo by Andy Tinkham via Creative Commons)

Cheap natural gas prices have pushed many biomass projects to the back burner in recent years, but it’s a different story in rural communities without access to pipelines.

In northern Minnesota, two towns are considering their next steps after preliminary studies showed that small, wood-burning district heating systems could have economic and environmental benefits — if they can find a way to finance the up-front construction costs.

Grand Marais, on the north shore of Lake Superior, and Ely, on the edge of the Boundary Waters Canoe Area, currently rely on fuel oil or propane for heat.

“Up here, there’s no natural gas because there’s no pipeline. We live on solid rock, so everything is trucked into the community,” says Paul Nelson, chairman of the Cook County Biomass Working Group in Grand Marais.

Meanwhile, both towns are surrounded by aging forests that could provide more than enough sustainably harvested wood to power a community-scale district heating plant, according to an analysis by Dovetail Partners, a Minneapolis environmental nonprofit.

Grand Marais’ biomass project grew out of a local forest fire safety effort. The Firewise campaign encourages homeowners to regularly clear brush as a way to protect their homes from encroaching flames. The result: “mountains” of sticks and leaves that are dropped off at designated gravel pits for burning on days when the fire risk is low.

It seemed like a waste to Nelson and others, who began promoting the idea of a community biomass plant. Voters approved a 1 percent county sales tax in 2009 that authorized the county board to spend the revenue on, among other things, feasibility and design studies for a district heating plant in Grand Marais.

Around the same time, the Ely Alternative Energy Task Force began investigating the potential for biomass heating there. It’s since focused on two possible projects, one at the local community college and another that could heat the hospital, school district, and possibly extend to some larger business customers, too.

“There are a range of biomass energy system sizes and types that could be used in northern Minnesota, and district heating systems appear to make financial sense for many communities in this region,” the report concludes.

“The technology has come a long ways, even from ten or 15 years ago,” says Fernholz. “People who think back to the energy crisis of the 1970s and the wood stoves — forget it. That is ancient history compared to what we’re talking about now in terms of the efficiency and the low emissions of these systems.”

The latest estimates for capital costs range from $1.9 million to $16.9 million in Ely, depending on the scale of the system, and between $995,000 and $11.8 million in Grand Marais. Fernholz said both towns could likely design projects with simple payback periods in the range of five to ten years.

‘We’ve got biomass coming out of our ears’

The piles of brush gathered from people’s yards wouldn’t be enough to power a heating plant, says Nelson, but backers in Grand Marais have found another plentiful source: over-aged aspen, which needs to be removed to make the forests healthier.

“We have an unending supply [of aspen], so the price on that would be very stable over the long term,” says Nelson.

Dovetail’s fuel supply analysis showed both communities would have more than enough fuel using only the tops of limbs from trees that are already harvested within a 60-mile radius. The tree tops go into a fuel known as hog fuel, a blend of bark, leaves, and branches that aren’t used by paper or lumber industries.

“We’ve got biomass coming out of our ears out there,” says Dave Olsen, a member of the Ely Alternative Energy Task Force. “We want to use the junk that the Forest Service and others are just having to burn in the woods to get rid of it.”

The next step in both towns is coming up with a specific business plan that outlines who will own the facilities, who the customers will be, and how much they’ll pay.

“Until we can tell them exactly what it’s going to cost, they really can’t commit,” says Olsen.

In Ely, the community college is considering whether to re-start a mothballed biomass burner on its campus. The other facility could be built as a cooperative, says Olsen. Other options might include the hospital owning it and selling heat to the school district, or those two users could jointly build and operate it.

In Grand Marais, the city’s public utilities commission is open to the idea of operating the plant. Before the city would issue revenue bonds for the project, though, it would need commitments from prospective customers that they planned to buy heat from the municipal utility instead of continuing to use their existing propane or fuel oil heaters.

“To me, it makes great sense, and it looks as if the economic analysis pencils out,” says Karl Hansen, chairman of the Grand Marais Public Utilities Commission. “I think the sentiment of the PUC is to certainly do whatever we can to support this.”