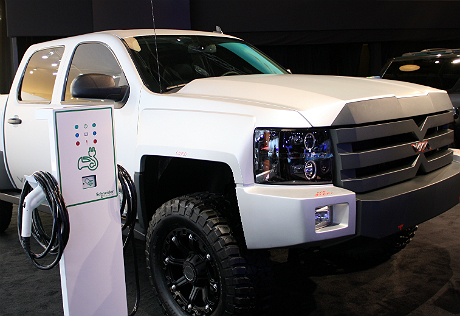 A GM pickup converted to an extended-range electric vehicle by VIA Motors. (Photo by Howard Lovy / Midwest Energy News)

This was the way VIA Motors, a company that converts trucks, vans and SUVs into extended-range electric vehicles, rolled out three new products Monday at the North American International Auto Show, in a display reminiscent of the real-life Edison, himself the king of the publicity stunt.

And with electric vehicles still largely a niche product – even hologram Edison acknowledged “the transition will still take some time” – companies with all-electric offerings recognize the importance of competing for your attention, if nothing else.

“Customers have to know you exist,” said Lauren Flanagan, executive chair of another Lutz investment, Current Motor, an electric motorcycle company based in Ann Arbor, Michigan.

But while the major auto companies, with a few exceptions, rolled out prototype-only electric vehicles — from the BMW i-series to Smart’s not-yet-released electric-drive vehicle — Current is already shipping vehicles to consumers even while it improves on its proprietary electric motor. The electric motorcycles are selling to, “green, affluent, techie, early adopters who want a no-emissions vehicle,” Flanagan said.

“I think what’s clear is the market’s real,” Flanagan said. “It’s still an emerging market. It’s not big. It’s not going to be mainstream for some time until the cost of battery technology comes down and range is greater. The cost and the range anxiety are probably the two big obstacles to widespread adoption.”

Electric vehicles will not become widely accepted by the public until they can go at least 300 miles on a charge, can be charged and ready to go within five minutes and can be bought at a price comparable to their internal combustion cousins, according to Simon Ng, director of the National Biofuels Energy Laboratory at Wayne State University in Detroit.

“The good news is battery costs [are expected] to be lower by 50 percent within the next couple years,” Ng said. “However, improvement in energy density and fast charging technology have not progressed fast enough. There are issues of durability, safety, and replacement cost of battery; and that will take a few more years of intense research and development.”

Flanagan’s solution is to begin with two wheels instead of four. The motorcycles are a gateway to the world of battery electric vehicles while the technology is improved. On two wheels, drivers are not going to go cross-country — 50 miles per trip is about the limit — but at just under $10,000 after tax credits, the price is more affordable than, say, $98,000 for an all-electric Tesla Model S.

And with “test pilots” scattered across the country reporting back on how the cycles ride for the past three years, Current has an advantage that many large car companies do not — actual wheels on the ground in customers’ hands.

Ng said that will change shortly, though, as more major car companies will produce electric-drive vehicles in 2013. Even though many are still in prototype phase, the point is to simply have some skin in the game, Flanagan said.

“We know we’re going to cross the chasm on these barriers and then we’ll see mainstream adoption,” she said. “So, you don’t want to be left behind without a product.”

‘The scooter that talks to the cloud’

Meanwhile, what is important now is market differentiation. Why should this core group of early adopters want to buy your test product rather than somebody else’s test product? The solution that Current came up with is a partnership with Dell on technology that enables “the scooter that talks to the cloud.”

With sensors on just about every part that moves on the cycle, Current tech support can tell exactly what’s going on with each vehicle on the road. Battery isn’t charging as fast as it should? Current can do some remote diagnostics. The Dell partnership also enables a smart-phone app that allows users to schedule charges during off-peak hours, plan trips, see how much CO2 is being saved by riding and, of course, update your friends on Twitter and Facebook.

In the end, though, marketing gimmicks can only take you so far.

Despite some flashy marketing for VIA Motors that met with, at best, tepid applause from the press corp at the auto show, the startup does have something else to back up the hoopla — wheels on the ground. The company is supplying SUVs to Verizon and Pacific Gas and Electric.

VIA Motors President Alan Perriton said that, given the two companies combined have 30,000 vehicles on the road, they could “single-handedly kick-start the electric vehicle revolution all by themselves.”

“We’re building a bridge from the past to our electric future, inspired by visionaries such as Thomas Edison and Bob Lutz, and pioneering fleets like Verizon and PG&E,” Perriton said.