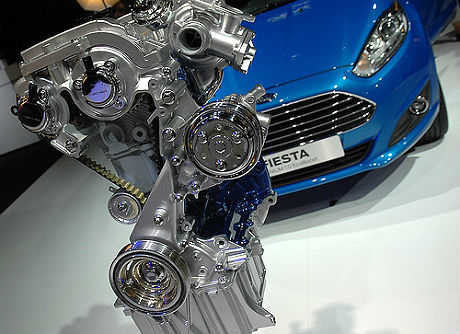 Ford's 1.0-liter EcoBoost engine on display at the Paris Auto Show in 2012. (Photo by Autoblog via Creative Commons)

DETROIT — While electric cars wow crowds and the media at auto shows, there’s no denying that for now, gasoline-powered cars still rule the roadway.

That’s not to say electric vehicle technology isn’t important, says a leading industry analyst, but the focus for the near future will continue to be developing internal-combustion engines that meet tightening fuel economy standards while still being affordable to consumers.

Brett Smith, a co-director at the Center for Automotive Research, based in Ann Arbor, Michigan, sat down for an interview with Midwest Energy News in front of the Chevy Volt — which incorporates both technologies — at the North American International Auto Show in Detroit this week.

All that electric-automobile technology is very cool, very green … and mostly just for show, Smith said. He believes the Volt and Tesla represent “incredible” advancements, “but in terms of mass-market competitiveness, we’re still at a point in time where gasoline beats everything.”

At an event last August, sponsored by Smith’s CAR group, the major auto companies said they are preparing for an eventual shift to electrification, but that day is still far away. Meanwhile, they are working toward an average of 4 or 5 percent improvements in fuel economy every year through tweaks to the internal combustion engine, including those that burn gas, diesel, ethanol and compressed natural gas.

Right now, Smith said, “the hype curve gets ahead of the technology curve.” Yet it is in the interests of the auto companies to pump up the hype, and wheel out prototype electric vehicles, for two reasons.

First, it’s great publicity. “That’s the cynical reason,” he said. “The other is that, in the long term, what they learn through developing electric vehicles is probably viable, important technology.

“Generally, the industry agrees that, in some form, electrification is going to be the key driver in the next 10 to 15 years,” Smith said. However, “they don’t necessarily agree what that form is. … The knowledge isn’t there right now.”

High-speed development of alternative fuel vehicles was launched largely as an attempt to catch up with Toyota, which introduced its first hybrid vehicle, the Prius, back in 1997 and has since sold more than 3 million of them.

“Toyota owns the hybrid market with the Prius,” he said.

“That’s all set,” Smith said. “The companies now know what they have to do. You’re almost at a quiet time, in a sense, in that all the talk is over and the companies need to figure out how to … explore all these technologies.”

So what about the Chevy Volt and its smaller electric cousin, the Spark, or its luxury counterpart the Cadillac ELR? Or the new electric Nissan Leaf? Is it really all for show?

Yes and no, Smith said.

“All of these are learning technologies right now for the companies,” he said. “That isn’t to imply that they’re beta software. They are ready for prime time. They’re real cars, they’re real technologies. But they’re not really mass-market.”

The auto companies are in a bit of a quandary, he said, because a Silicon Valley mentality is being urged on them through competition with companies like Tesla, based in Palo Alto, California, which says not to fear failure. Your company fails, you just fold it up, learn from the experience and then launch a new one. That’s the tech startup mentality. But that doesn’t necessarily work in Detroit.

“Midwesterners are much more conservative, much more careful,” he said.

As if to illustrate this point, Tesla Vice President George Blankenship told a packed press conference as he showed off the falcon-winged Model X, that what his company is doing is really not about cars at all.

“Why are we doing this? It’s about creating a brighter future for your children and grandchildren,” he said.

Meanwhile, though, the major automakers need to make cars that consumers will buy right now … and affordably … and meet new fuel-economy standards.

“Maybe the best thing to come out of President Obama’s push for electrification was the pressure it put on the car companies to make the gasoline engine better. Because they, I think, realized [in the short-term] that the battery electrics are going to be a great showpiece but they’re not going to be their solution,” Smith said.

Smith is a fan of EcoBoost, which is Ford’s answer to the call for more-efficient internal combustion engines. It combines a lighter engine with direct injection, turbocharging and other power improvements, leading to 20 percent lower fuel consumption. Ford expects EcoBoost engines to be available in 20 percent of all its vehicles sold in the United States by 2014.

“I think the most interesting engine on the floor is the 1.0-liter EcoBoost,” Smith said. “It shows the American consumer what they can expect in the future.”

The new engine is much smaller than the existing 4-cylinder engines found in most cars on U.S. roads today, and produces around 123 horsepower (by comparison,that’s more than twice as powerful as the 1.0-liter, 3-cylinder engine found in some Geo Metro models in the mid-1990s).

And that is the tradeoff as the major auto companies embark on an unknown technological future.

“It will get you better fuel economy, which you’ll save gas on, but it ain’t going to come for free.”