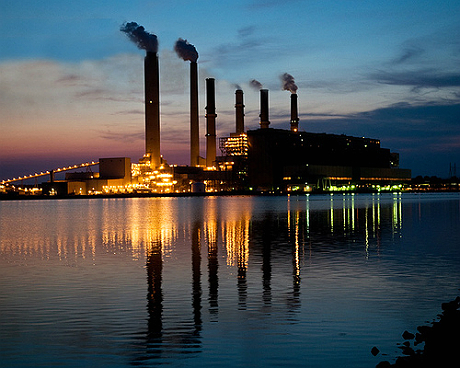 Coal-fired power plants around the country are closing due to environmental regulations and competition from cheap natural gas, but during hearings before the Indiana Utility Regulatory Commission earlier this month, officials from one of the state’s largest utilities sought to buck the trend.

Duke Energy Indiana is seeking permission from the state regulatory commission to bill ratepayers for making retrofits to three of its Indiana coal-fired power plants in order to comply with looming federal environmental regulations, most importantly the Mercury and Air Toxics Standard (MATS) with a 2015 deadline.

Environmental groups that submitted testimony at the hearing argued that investing in the aging coal plants is a bad deal for ratepayers, who will pick up the cost since Indiana is a regulated energy market. And, they say, it unwisely continues a dependence on electricity sources that emit high levels of carbon dioxide, further contributing to climate change.

Instead, they told the commission, Duke should invest in natural gas, energy efficiency and other options. The Indiana Citizens Action Coalition, Valley Watch, Save the Valley and the Sierra Club intervened in the regulatory proceedings (the Sierra Club is a member of RE-AMP, which also publishes Midwest Energy News).

The commission is currently considering Duke’s request to pass on about $400 million worth of pollution control investments to ratepayers for its Cayuga, Gibson and Gallagher coal plants, as phase two of an ongoing retrofit program. Duke told the commission it plans to close a fourth coal plant, the Wabash River station, though there is a possibility one of its units would be retrofitted as a natural gas plant. The average age of the four coal plants is 45 years.

A Duke fact sheet says the requested phase two investments would mean less than a one percent rate increase in 2013-2014, scaling up to a 6.3 percent rate increase by 2017. In filings the company also indicated it would seek about $945 million for phase three of the retrofit project, possibly in coming months.

In making its request to the commission, Duke was required to consider various ways it could meet its power obligations.

The coal plants would have to close in coming years if they don’t make the expensive pollution control upgrades, including installing 200-foot-tall SCRs (selective catalytic reduction equipment) that remove nitrogen oxides; and activated carbon injection to control mercury.

Duke indicated to the regulators that after evaluating different scenarios, it decided retrofitting and continuing to run the coal plants through at least 2034 is its best option.

On November 29, the environmental groups filed testimony they had commissioned from Frank Ackerman, a senior economist at Synapse Energy Economics. Ackerman charged that the range of options explored by Duke was too narrow.

“The Company should have examined the possibilities of increasing their use of energy efficiency and demand response measures, expanding their portfolio of renewable energy, and increasing purchases of energy from other generators within MISO,” wrote Ackerman in his testimony.

(Enter case number 44217 at this link to see Ackerman’s testimony and other filings in the docket.)

Indiana’s electric demand could be reduced considerably in coming years with improvements in the energy efficiency of buildings and appliances and improvements on the grid to better move electricity where it’s needed. Duke is required to invest a certain amount in energy efficiency through 2020 under a state program.

Speaking at the Midwest Energy Efficiency Alliance’s annual conference in Chicago last week, Duke official Tim Duff said, “Energy efficiency has been a longstanding priority for the company” and cited awards Duke has won for energy efficiency projects. “Duke also believes you can’t just look at the customer side of the meter, you have to look at the utility side to deliver the power as efficiently as possible.”

Clean-energy advocates say that even without state mandates, Duke should plan to make greater investments in energy efficiency in the future.

The American Council for an Energy-Efficient Economy’s 2012 State Energy Efficiency Scorecard listed Indiana as 33rd in the nation in energy efficiency, ranking below all Midwestern states except North Dakota and Kansas. In efficiency savings as a percentage of retail sales, Indiana ranked 42nd in the nation.

Relatively low electricity rates in the Midwest mean energy efficiency efforts have a lower rate of financial return, but Ackerman noted that other Midwestern states ranked high in efficiency savings as a percent of retail sales – Minnesota was number four – even though they also have relatively low energy prices.

Duke based predictions on the assumption that energy efficiency gains would continue after 2020 at proportionally the same levels mandated under the existing state program. Thomas Cmar, an Earthjustice attorney representing the environmental groups, said Duke should aim to do better (Earthjustice is also a member of RE-AMP).

“Duke can do more on efficiency than the bare minimum, and it should do more if the money spent on efficiency gives more bang for the buck for ratepayers than spending it on generating the same amount of electricity,” Cmar said.

A carbon price and other factors

Duke senior engineer Michael Geers told the commission that while the company doesn’t expect Congress to enact climate change legislation in the near term, they based their predictions on Congress passing a price on carbon that would take effect in 2020 at $17 a ton and escalate to $44 a ton by 2032.

In answers to questions posed by the commission, Duke said that a 2020 starting carbon price of $21 per ton would render un-economic the biggest portion of its retrofits: SCRs at the Cayuga plant.

Synapse came up with its own “mid-case” prediction for the impacts of a carbon dioxide price, “based on a review of dozens of utility and other forecasts” as Ackerman’s testimony said.

Ackerman concluded that even Duke’s modeling promised only small benefits to retrofitting the coal plants versus other options, and he said these benefits could quickly evaporate with a carbon price or other conditions different than Duke had predicted.

“In other words, a carbon price lower than Dr. Ackerman predicts would, by itself, completely wipe out the value of Duke’s largest coal retrofits even if Duke is correct on every other assumption,” Cmar said.

“Some of these plants have old coal ash landfills that would need to be cleaned up,” said Cmar. “And with scrubbers a lot of waste ends up in the wastewater; the EPA is in the process of requiring additional wastewater treatment.”

A bias toward coal?

Meanwhile coal accounts for 85 percent of Indiana’s total power generation, according to Duke, and the company is the largest coal buyer at about 12.5 million tons a year. Duke has already invested $2.8 billion in pollution controls since 1990 to keep its four coal plants going, and it is completing a new “clean coal” plant in Edwardsport, Indiana that is not part of the request before the commission.

Duke noted that the phase two investments it is seeking would create 285 construction jobs and contribute to the continued existence of mining and transportation jobs.

Indiana Citizens Action Coalition executive director Kerwin Olson thinks state officials and Duke executives are biased toward the coal industry in part because of its political clout among Indiana lawmakers.

“Duke is the largest consumer and purchaser of Indiana coal so they get a lot of political support because of their use of Indiana coal,” said Olson. “We have adopted so many (state) statutes that incentivize the continued use of coal, particularly Indiana coal, so they’ve gamed the system politically to favor this option.”

Indianapolis Power & Light has also sought to bill ratepayers for the cost of adding pollution controls to coal plants to keep them running, even as environmentalists including Indiana Citizens Action Coalition say the money would be better spent on wind energy and energy efficiency.

Cmar said the retrofits might also qualify for an incentive for “clean coal” development under a state statute that allows regulated utilities to collect an extra three percent return on their clean energy investments. He cited June 2012 testimony by Joseph Miller, general manager of analytical and investment engineering for Duke Energy Business Services LLC. Miller’s testimony focused largely on how the retrofits would qualify as “clean coal” and “clean energy” projects.

Duke spokesperson Angeline Protogere said the clean energy incentive did not figure in to Duke’s calculations. “We’re not aware if the Indiana Commission has ever authorized the extra three percent incentive provided for under Indiana code, but we have not asked them to do so in this proceeding,” she said. “It had no impact on our decision making.”

The environmental advocates also believe Duke’s predictions of future fuel prices unrealistically favor coal, without adequately considering what would happen if coal became relatively more expensive compared to gas than they had forecast.

Protogere said that Duke evaluated its options based on a range “developed using statistical analysis of a portfolio of future gas and coal prices.” She said she couldn’t elaborate on how they reached those prices because of proprietary information.

“If we switched immediately to more new gas plants and renewable energy sources, customers would have the burden of paying for new facilities years before they would have otherwise been needed,” said Protogere. “We take seriously the job of planning to supply our customers with safe and reliable electricity. When we make electricity greener, we do so with customers’ costs in mind.”

“While Duke Energy Indiana cannot predict the future, neither can others,” she added. “What we can do is to make the best decisions for the future based on what we know today.”

Cmar and Olson said the company is taking a short-term view.

Olson said the company has an “inability to think outside the box and move into the 21st century. They’re stuck in the 20th century belief in baseload power plants that bring them a lot of money and political support.”

Cmar decried the fact that Duke’s analysis only goes through 2034:

“Even if everything that Duke is predicting comes true, when 2034 rolls around Duke could either have decades-old coal plants at or near the end of their useful lives, or relatively new natural gas plants that will continue to operate for decades after that.”